“Important as transgenic mice are, they are really the tip of the iceberg when compared with what we are going to see in the next few years.”–Janet Rossant

Several hundred mouse stocks containing mutations have been used for a long time as models of human disease and for the study of metabolic processes. Traditionally, the mutations have been spontaneous or induced by chemicals or radiation. Recently, scientists have gained the ability to create mutant strains by integrating foreign DNA, with increasing specificity, into the genome of mouse cells. Such transgenes can be added at random to the genome. Offspring of the resulting mouse express the trait coded for by the foreign DNA. Alternatively, mutations can be targeted at specific loci to produce “knockout mice ” which do not express the gene, or otherwise to alter gene expression. Those approaches are now revolutionizing genetic research.

HOW TO MAKE A TRANSGENIC MOUSE

The revolution began in 1974 when Rudolph Jaenisch and Beatrice Mintz infected mouse embryos with SV40 virus and showed that the viral DNA was integrated in the germ line. After this proof that one could insert foreign DNA into the mouse genome, Jon Gordon and Frank Ruddle were able, in 1980, to demonstrate how to microinject foreign genes directly into the nucleus of mouse eggs. Thus, any cloned gene sequence could, with careful technique, be integrated into a mouse's DNA. The injected genes insert into the host DNA at random and can be distributed throughout the genome.

Transgenic mice are made by using glass micropipettes to inject a solution that contains DNA from a chosen source into the nucleus of a fertilized mouse egg. At times, the foreign DNA will be integrated successfully into the chromosomes of the mouse-egg nucleus. The eggs are then transferred to a foster female mouse. The foreign DNA will act as a Mendelian gene in this mouse and be passed on to its offspring, about 10-20% of which will carry the new gene.

Papers published on the use of transgenic mice (as counted by searching the term transgenic mice on Medline) have grown from zero in 1980, when transgenic mouse was not yet in common use, to over 700 in 1992. During that 12-year period, perhaps thousands of different transgenic mice have been made in laboratories, often to be used in a few experiments before being discarded. Transgenic mice have become a major research resource, and applications of the transgenic approach have begun to infiltrate the world of biotechnology.

THE USES OF TRANSGENIC MICE

Thus far, a major use of transgenic mice has been to determine what DNA sequences regulate the expression of a gene in specific tissues or at specific times in development. Putative regulatory sequences from the gene of interest are attached to a reporter gene, which is microinjected into a mouse egg to create a transgenic animal, and tissue-specific expression examined. One can define promoter sequences, enhancer sequences, and locus-control elements, which together comprise the short-range and long-range sequences that drive spatial and temporal gene expression in mice.

Once specific promoter sequences directed at a particular tissue have been defined, they can be used to express many kinds of gene products in that tissue. The uses of directed expression of foreign genes are highly varied. Promoters can be used to express a toxin gene; wherever that gene is expressed, the cells will die, and the roles of these particular cells can be analyzed. Once the promoters are better defined, one can envisage using this technique to study the nervous system by ablating specific neurons in the developing brain and assessing the effect of such ablations on neural function.

One can also produce tissue-specific lineage markers by using a reporter gene like β-galactosidase, whose activity can be detected as blue-staining cells. The reporter gene can thus be used as a marker of lineage as one follows its presence in developmental or transplantation studies. Tissue-specific promoters have been introduced into many mice to drive activated oncogenes that produce tumors in particular tissues, such as mammary carcinomas, pancreatic tumors and lymphomas. These “oncomice” can be extremely useful for studying both the process of tumorigenesis and potential therapies for the tumors. Extension of the uses of tissue-specific expression of transgenes to animals other than mice opens up new commercial applications. Animals–perhaps cows, sheep, and pigs–can be used as factories to produce pharmaceutically important peptides. One approach is to direct gene expression to the milk proteins so that pharmaceutically important compounds are secreted efficiently into the milk, from which they can be isolated.

Transgenic mice can also be used to study gene function or to generate models for human genetic disease, provided that the desired effect can be

observed when the transgene is expressed in the presence of the multitude of host genes. In other words, dominant gain-of-function genetic alterations can be studied. In some cases, simple overexpression of the gene of interest can yield a phenotype that can be useful for study of normal development or of human disease. For example, overexpression of the LDL receptor and ApoE proteins that affect cholesterol concentrations can give information relevant to the development of atherosclerosis.

Human genetic diseases caused by dominant mutations can often be modeled in transgenic mice. For example, mouse models of osteogenesis imperfecta have been produced by introducing a mutant collagen gene that interferes with normal collagen assembly. It is also possible to generate good models of sickle-cell anemia in mice by introducing the mutant sickle-cell globin gene.

Although most transgenic manipulations are limited to dominant effects, a byproduct of transgenic-mouse production is the generation of new recessive mutations, which are caused by disruption of a host gene on insertion of foreign DNA. These mutations provide novel phenotypes for study. At the same time, the exogenous DNA marks the disrupted gene, so it can be isolated, cloned, and studied further to elucidate biological processes.

The Next Generation of Genetically Altered Mice

As important as are the above examples of the use of transgenic mice, they illustrate only the beginning of the scientific potential of this new mouse resource. Now, rather than being limited to experiments that rely on the insertion of dominant genes into eggs, scientists can genetically manipulate cells, generate mutations in any host gene at will, and then return the altered cells to the germ line. Two technical developments have made this possible. First, techniques have been developed for growing from the mouse blastocyst in culture under conditions that allow the cells to remain undifferentiated indefinitely. These embryonic stem (ES) cells can be frozen for future use and reference. They can be induced to differentiate in vitro into many cell types–a useful research tool in itself–but when injected into an early mouse embryo can contribute cells to all the tissues of the resulting mouse, including the germ line. It is even possible to create a mouse all of whose cells are derived from ES cells grown in a petri dish. Any genetic manipulation that one can do in ES cells can now be introduced into a mouse germ line, and the effects of that manipulation can be studied in the offspring of the chimera.

The second technical development that has led to the revolution in mouse genetics is homologous recombination. When DNA is introduced into

mammalian cells, it often integrates at random. However, Oliver Smithies demonstrated in 1987 that DNA that is homologous with host DNA will integrate into the correct site at a reasonable frequency. Over the next few years, techniques to enrich and select for these “targeted ” events were developed and applied to ES cells. Now it is possible to use homologous recombination to make alterations in any gene in the genome and then study the effects in mutant mice.

Despite those far-reaching advances, the revolution in biology is only beginning. Using targeted mutagenesis, most studies to date have only aimed at deleting gene function. Numerous further lines of research can be envisaged, such as:

The new mutant resources generated by transgenic insertions and targeted mutations are complemented by work in previously existing strains of mice that arose by spontaneous mutation, increasing numbers of which are now understood at the molecular level. For example, a mouse called Splotch, is caused by a defect in a developmental gene called Pax-3. A human syndrome of craniofacial defects, called von Waardenberg 's syndrome, is caused by mutations in the same gene. Another member of the same gene family, Pax-6. is mutated in the mouse mutation small-eye and the human aniridia syndrome. With mouse strains that act as models of multigenic diseases like diabetes, the mouse genetic resource is an increasingly rich pool of models for studying all aspects of normal biology and disease processes.

Next: 4. Issues Posed by the New Mouse Genetics, and Possible Solutions »
Sharing Laboratory Resources: Genetically Altered Mice Get This Book
× 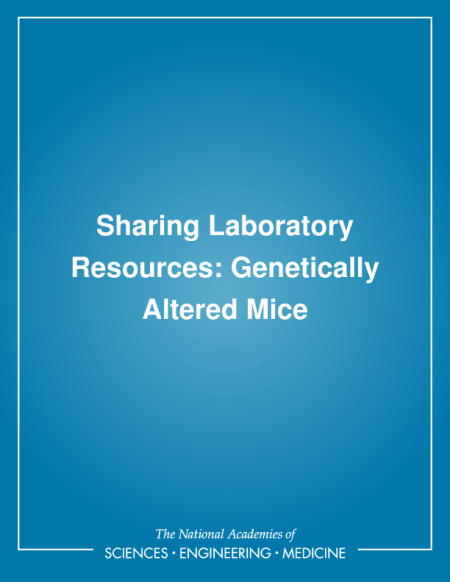