Visit NAP.edu/10766 to get more information about this book, to buy it in print, or to download it as a free PDF.
Page i Share Cite
Suggested Citation:"Front Matter." National Research Council. 1984. Geotechnical Site Investigations for Underground Projects: Volume 1. Washington, DC: The National Academies Press. doi: 10.17226/919.
×

because the construction environment both affects and responds to the design and construction processes as well as, ultimately, the operation of the completed facility. Therefore, an adequate and reliable determi- nation of subsurface conditions is essential to every phase of the proj- ect and, as a consequence, is a significant factor in the final cost. The basic objective of this study is to discover improvements in practice and procedures that will enable planning and conducting more effective geotechnical site investigation programs. In turn, the re- sults of the study are expected to contribute to a series of wider ob- jectives: advancements in underground construction technology, improve- ments in controlling or moderating construction costs, and reductions in the incidence and degree of construction hazards or failures. METHODOLOGY The approach adopted for this study was to examine completed projects for which the results of the preconstruction site investigation could be related to the construction history. The procedure was designed to per- mit in-depth study of a large number of these projects, their respective site investigation programs, and the construction problems and unantici- pated costs (or lack thereof), as a means of determining the nature and significance of the relationship between investigation programs and project problems and costs. The method for carrying out this study proved to be quite complex, requiring extensive input by members of the subcommittee and the under- ground construction community (see Appendixes A, B, and C). In addition to a three-day writing workshop, six meetings of the subcommittee or small working groups were held, and many specific tasks were assigned to individual subcommittee members. The subcommittee was assisted by a senior consultant and two subcontractors, one for engineering data and one for computer programming. Essentially the study consisted of four main tasks: â¢ A list of underground projects completed in the last 20 years was developed, from which 100 projects were selected as suitable for case history study. â¢ A case history data form was developed to permit correlation of the types and extent of the site investigations conducted prior to design and construction, as-built geological conditions, differing site conditions claims, cost overruns, and delays encountered during con- struction. â¢ The data therefrom and additional information derived from the personal experiences of subcommittee members were evaluated and con- clusions drawn, keeping in mind the rapidly advancing state-of-the-art in design and in construction equipment and methods. â¢ A computer program was developed to receive and store for fu- ture retrieval the pertinent site investigation and construction case history data. iv

The first meetings were spent outlining the study schedule, compil- ing a list of projects that appeared most desirable as sources of data, devising a detailed data recording document, and preparing letters of request to be sent to owners and contractors involved with the selected, completed projects. Charles w. Daugherty was engaged as the senior consultant for the project, to directly supervise the effort and coordi- nate incoming data, the field review, assignments subcontracted to Schnabel Engineering Associates (SEA), and the computer programming and processing undertaken by G. wayne Clough at Virginia Polytechnic Insti- tute and State University (VPI). As a first step, the selected project owners were requested to send in a complete set of bidding and construction documents. These docu- ments were then given to SEA, which extracted the bidding data for com- pilation onto the data form. Once the initial data compilation was accomplished, assignments were made to the consultants, members of the Schnabel staff, and members of the subcommittee to contact and interview owners, designers, and contractors in order to complete the data forms. This was the most difficult and time-consuming task. At the same time, . a special working group devised a system of selecting, recording, and collating incoming data into a form suitable for computer programming and for subsequent overall analysis. The last few meetings of the subcommittee and working groups were devoted to a writing workshop, selecting projects for detailed discus- sion as case studies, preparing a format for abstracting the case histo- ries, reviewing and interpreting the data, revising the initial draft report prepared at the workshop, and developing conclusions and recom- mendations. As the study progressed, it became apparent that although there ex- ist a large number of projects from which to choose, obtaining complete data on any project is extremely difficult. No one source had available all the data on any project, and a surprising amount of information had been lost or thrown away. Also, much of the data was found to be pro- prietary or was simply not available due to unresolved claims litiga- tion. Due to these constraints, 87 of the original 100 case histories were deemed sufficiently complete to be included in the final compila- tion of data presented herein. The conclusions drawn, therefore, are based on the predominant data obtained and do not necessarily reflect every case history examined. DATA COLLECTION AND COMPILATION The subcommittee's methods of collecting and compiling mined tunnel data are covered in considerable detail in Appendix c. This information is included in the report for two reasons: the data presented are varied, complex, and subject to more than one interpretation; and the approach and methods may be of some interest to researchers contemplating similar studies. Briefly, the collection and compilation process incorporated the following steps: v

â¢ Obtaining data packages from the owner~ these consisted of contract drawings, specifications, geotechnical reports, bid abstracts or tabulations, and other documents. â¢ Extracting information for transfer to the basic 15-page data form (compilation to approximately the 40 percent stage). â¢ Interviewing owners, contractors, and others affiliated with the project for answers to the remaining questions on the data form (compilation to approximately the 90 percent stage). â¢ Combining the information obtained from the data packages and the interviews to prepare a final version of the data form (compilation to 100 percent). â¢ Reviewing the final data form for consistency and clarifying any ambiguities through follow-up discussions with individuals who were original sources of information. â¢ Reducing the 15-page data form to a 2-page abstract of the project. It should be recognized that the brevity that is necessary i~ any printed form has the potential to produce distortion, in that a short answer may not explain the shadings or nuances of a particular situa- tion. This was generally compensated for in the 15-page data forms (see Appendix C) by adding explanations in parentheses and footnotes. This form became the basic record of all data collected for each project studied, and provided the information extracted for the data matrixes (provided separately as Plates 1 and 2), case history abstracts (see Volume 2), and computer retrieval system (Volume 2). The reader should understand that for general knowledge of the 87 projects repor~ed as case histories, a study of the data summary ma- trixes will suffice for quick correlation. For a more thorough under- standing of particular projects, it will be necessary to research the abstracts, which are themselves more general than the original data forms. vi

Acknowledgments This study was conducted with the assistance of the underground con- struction community. Many individuals--owners, designers, contractors, construction managers, engineers, geologists, geotechnical engineers-- provided documents and information, expert opinion, suggestions, and constructive criticism. Without their contributions, a study of this complexity would have been impossible. Additionally, other individuals listed in Appendix A participated with the subcommittee in a three-day writing workshop. The owners listed in Appendix B supplied contract drawings, specifications, geotechnical reports, bid abstracts or tabula- tions, and construction history reports for numerous projects. The study was supported through the Transportation Systems Center by eight agencies: Defense Nuclear Agency, Department of Energy, Nuclear Regulatory Commission, u.s. Army Corps of Engineers, u.s. Bureau of Mines, u.s. Bureau. of Reclamation, u.s. Geological Survey, and Urban Mass Transportation Administration. Their representatives provided en- couragement and suggestions throughout the study. The subcommittee was assisted by two consultants, Charles w. Daugh- erty and William Pease. Mr. Daugherty served as senior consultant and was responsible for putting into practice the methodology adopted for the study, supervising the work of the engineering and data processing subcontractors, scheduling interviews and assigning interviewers for case projects, reviewing all data forms for consistency and accuracy throughout various stages of completion, managing reduction of the data to abstract form, verifying tabulations of data prepared by the subcom- mittee, participating in the meetings and writing workshop, and attend- ing to countless details. Mr. Daugherty devoted many long, and often tedious, hours of effort to these responsibilities; his dedication, vigilance, and intense personal interest in every aspect of the study were vital to successful completion. Mr. Pease played an important role in the early stages of the project; during approximately the first year, he assisted the subcommittee in refining the study concept, developing procedures and plans, and initiating contacts with owners and con- tractors. Schnabel Engineering Associates (SEA), Bethesda, Maryland, served as the engineering subcontractor for data extraction. Brian w. Beard led the SEA effort with great competence; he was assisted by Thaddeus R. Bergling. Virginia Polytechnic Institute and State University (VPI), at Blacksburg, was the computer programming and processing subcontractor. vii

G. Wayne Clough directed the work at VPI and designed the computer format for managing the case history data. His combined knowledge of under- ground construction and computers was a substantial benefit throughout the lengthy process of data collection and compilation. Several individuals provided special assistance during the course of the Â· study. James s. Redpath and Charles K. Presley contributed their considerable expertise& on shafts, each graciously donating time and effort to participate actively in writing sessions conducted by the subconunittee. Ronald E. Smith, of Woodward-Clyde Consultants in Rock- ville, Maryland, attended to innumerable details and arranged for staff members Douglas T. Detman and Frederick w. Meyer to assist in reviewing and checking the information presented in the data summary matrix. Subconunittee members Don c. Rose and Howard J. Handewith undertook the arduous tasks of designing and compiling the data summary matrix and preparing charts and graphs illustrating various aspects of each proj- ect. Another subcommittee member, Edward L. Waddell, was instrumental in obtaining detailed information on the several projects needed to test the suitability of the data form. The subconunittee expresses its sincere appreciation to all of the contributors, participants and sponsors for their interest in and sup- port of the study project. viii

Next: 1. Introduction and Executive Summary »
Geotechnical Site Investigations for Underground Projects: Volume 1 Get This Book
× 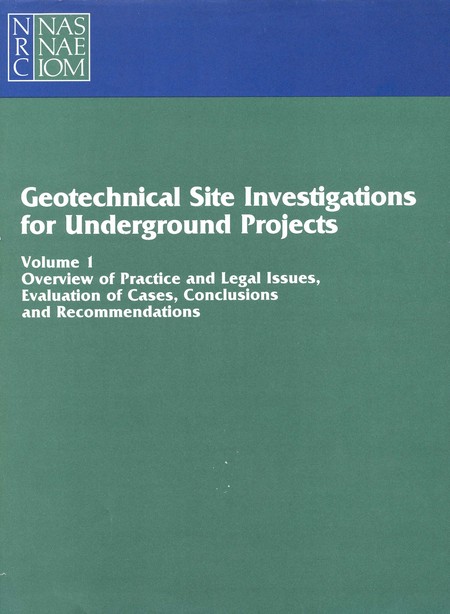