Get This Book
Visit NAP.edu/10766 to get more information about this book, to buy it in print, or to download it as a free PDF.
« Previous: EXECUTIVE SUMMARY
Page 7 Share Cite
Suggested Citation:"INTRODUCTION." National Research Council. 1995. Arctic Ocean Research and Supporting Facilities: National Needs and Goals. Washington, DC: The National Academies Press. doi: 10.17226/9215.
×

The Arctic Ocean is the world's smallest, with an areal extent of 13,900,000 km2, yet it contains the widest of all continental shelves, extending 1,210 km from the coastline at some sites off Siberia. The central basin has a mean depth of 3,700 m and is divided by three submarine ridges. The Arctic Ocean is nearly landlocked by Greenland, Canada, Norway, Alaska, and Russia, and the central portion is ice-covered throughout the year. Its primary inflow occurs through the Fram Strait between Greenland and Spitzbergen (Svalbard), with important inflow also occurring through the Bering Strait between Alaska and Siberia and across the Barents Sea shelf. The Bering Sea receives water from the Gulf of Alaska through the Aleutian Island chain, and the Chukchi Sea receives water through the Bering Strait. Outflow from the Arctic Ocean occurs primarily through the Greenland Sea into the Atlantic Ocean and forms the East 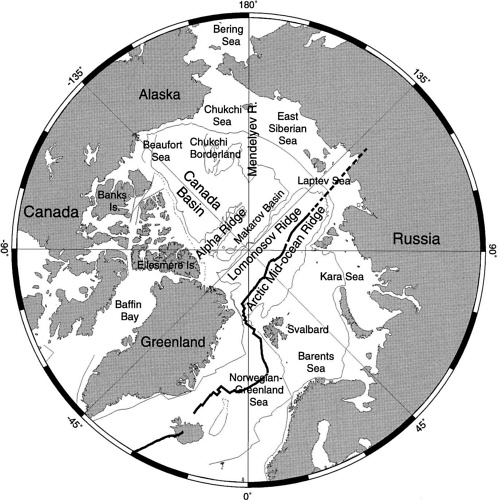 Surface water in the Arctic Ocean is cold and relatively fresh. Mean surface temperatures are close to the freezing point of seawater, except for the ice-free shelf waters, which are a few degrees Celsius warmer during summer. Bottom water temperatures are among the lowest observed in the world's oceans, and average about −0.53 to −0.96°C in the Canadian and Eurasian basins, respectively. Salinity is reduced by freshwater inflow from several rivers, and means range from about 28‰ to about 34‰ around the Arctic. Precipitation in the Arctic is relatively low, averaging 51 cm yr-1.

Ice cover of the Arctic Ocean and marginal seas varies seasonally, but approximately 70 percent of the Arctic is covered by sea ice at an average thickness of up to 4 m. In some areas, ice builds from year to year. The ice deforms continuously in response to stresses applied by the winds and currents, forming open leads and ice ridges up to 10 m high. Around the edges of the permanent ice pack, summer melting occurs, opening up the marginal seas. Areas of open water called polynyas form in localized regions within the ice pack during the ice growth season.

U.S. Interests in the Arctic

The following features of the arctic region are significant to U.S. interests:

For both global and domestic reasons, it is important that the United States acquire a knowledge base sufficient to understand arctic processes relevant to the specific interests listed above. The United States needs both year-round access and a long-term presence in the Arctic. It is not enough to sample in the north-

ern hemisphere spring and summertime, as is being done at present. Many of the important questions in the Arctic (e.g., fish abundances and recruitment, pollutant transport) require data from all seasons.

In past years, the U.S.S.R. had a major scientific presence in the Arctic. After the breakup of the Soviet Union, and associated economic difficulties in Russia, it is likely that the United States will need to play an expanded role in arctic science. In addition, areas that were previously inaccessible because of Soviet policies may be open to U.S. researchers. Coordination on national and international levels will be necessary to use resources efficiently to achieve science goals. There is a lack of strong, coherent, coordinated U.S. policy in the Arctic, despite the many national interests in this region.

Background of the Study

Discussion of the need for a dedicated research vessel for the Arctic began in the mid-1970s. The National Science Foundation (NSF) has supported conceptual and preliminary designs (Alexander et al., 1988; Royer et al., 1989; UNOLS Fleet Improvement Committee, 1990 and 1994) for an Arctic Research Vessel (ARV).† The estimated costs of construction for the proposed ARV are between $113 million and $130 million, which will be funded from the NSF capital equipment account and will not affect direct science support. NSF uses a value of $120 million for its financial planning. Operating costs of the ARV are expected to be $9.1 million annually, according to Donald Heinrichs of the NSF Oceanographic Centers and Facilities Section, not including costs of escort icebreakers. Concurrently with NSF's planning, the U.S. Coast Guard (USCG) has the icebreaker Michael A. Healy under construction, with science support identified as its primary mission.

The NSF Oceanographic Centers and Facilities Section (in NSF's Division of Ocean Sciences) requested that the National Research Council (NRC) assess arctic marine science objectives, as well as the required resources to meet these objectives before its ARV planning continues (Appendix A). In response to this request, the NRC's Ocean Studies Board and Polar Research Board established

the Committee on the Arctic Research Vessel. The charge for the study included a review and analysis of the scientific requirements for an arctic research vessel and evaluation of the NSF-proposed ARV in light of other research facilities available.

The committee was selected to provide a breadth of expertise in the principal marine science disciplines; marine engineering; and research vessel design, scheduling, and use. The goal was to include broad representation from the scientific community as well as specific arctic science experience (see Appendix B for biographies of the committee members). The committee met three times between February and May 1995. One meeting included a symposium focused on arctic science goals and needs.

The committee considered many research platforms that are either in use or likely to be available for arctic programs. However, once it became clear that both stationary and underway at-sea access are required to meet scientific objectives, and that the nation already possesses facilities relevant to other platforms (e.g., satellites, ice stations, and aircraft), the committee concentrated its efforts on the icebreaker Healy, the NSF-proposed ARV, and nuclear-powered submarines.

The committee benefited from the significant work that had been performed by the scientific community in developing and articulating arctic science goals. A number of reports, listed in the reference section, were available to the committee to aid in its deliberations. Many of these reports concluded that a surface icebreaker dedicated to research was needed in the Arctic. NRC reports published in 1988 and 1991 documented the need for a dedicated arctic research vessel. For example: “Thus, the scientific interests of the United States in the Arctic Ocean demand that a much more ice-capable vessel be added to the U.S. icebreaker fleet. Previous Polar Research Board reports have recommended procurement of such a vessel based on the requirements of the arctic marine science community (NRC, 1988). The arctic geoscience community reaffirms this need (NRC, 1991, p. 52).”

from the engineering firm Glosten Associates. All of these reports provided valuable background information to the committee regarding the detailed logistic requirements for arctic research platforms. In addition, the 1994 preliminary design prepared by Glosten Associates and the video of icebreaking model tests provided useful insight into the icebreaking capabilities and the planning already completed for an arctic research vessel.

This report focuses on the scientific challenges in the Arctic and the facilities needed to address these challenges. Chapter 2 summarizes the principal objectives of arctic research in the near future, as expressed at the workshop held in March 1995, and briefly describes the facilities needed. Chapter 3 describes the role and availability of arctic surface ships, submarines, and other platforms, as well as experiences of recent users of these platforms. Chapter 4 sets forth the committee's review of logistic and financial planning for a new arctic research vessel and develops bipolar facilities strategies and icebreaker fleet configurations that will meet future arctic research needs. Chapter 5 summarizes the committee's findings and recommendations.

Next: SCIENTIFIC OBJECTIVES FOR ARCTIC RESEARCH »
Arctic Ocean Research and Supporting Facilities: National Needs and Goals Get This Book
× 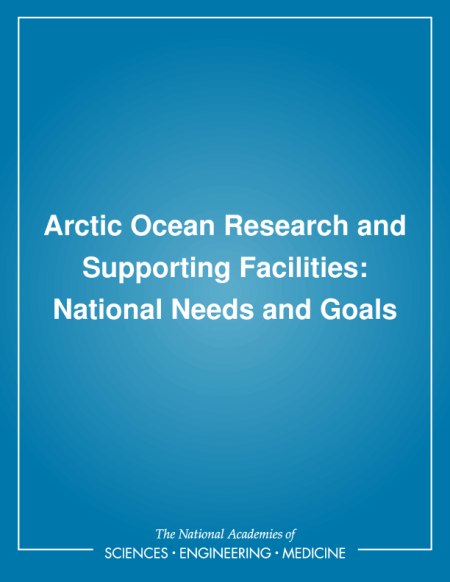