Get This Book
Visit NAP.edu/10766 to get more information about this book, to buy it in print, or to download it as a free PDF.
Page i Share Cite
Suggested Citation:"Front Matter." National Research Council. 1996. Vessel Navigation and Traffic Services for Safe and Efficient Ports and Waterways: Interim Report. Washington, DC: The National Academies Press. doi: 10.17226/9262.
×

The National Academy of Sciences is a private, nonprofit, self-perpetuating society of distinguished scholars engaged in scientific and engineering research, dedicated to the furtherance of science and technology and to their use for the general welfare. Upon the authority of the charter granted to it by the Congress in 1863, the academy has a mandate that requires it to advise the federal government on scientific and technical matters. Dr. Bruce M. Alberts is president of the National Academy of Sciences.

The Institute of Medicine was established in 1970 by the National Academy of Sciences to secure the services of eminent members of appropriate professions in the examination of policy matters pertaining to the health of the public. The institute acts under the responsibility given to the National Academy of Sciences by its congressional charter to be an adviser to the federal government and, upon its own initiative, to identify issues of medical care, research, and education. Dr. Kenneth I. Shine is president of the Institute of Medicine.

Limited copies are available from:

Copyright 1996 by the National Academy of Sciences . All rights reserved.

The nation's ports are economic engines. Most U.S. overseas trade (by weight) moves by water. Waterborne trade directly shapes local and regional economies and contributes substantially to the national economy. The movement of goods depends in large part on safe and efficient vessel transits through the nation's ports and navigation channels. Safety and efficiency, in turn, depend on the availability of timely and accurate information about vessel traffic and navigation conditions.

Improvements in the safety and efficiency of U.S. ports and waterways are necessary for a variety of reasons, including the demands of growing international trade, the trend toward larger ships and faster loading and off-loading operations, the presence of oil and hazardous cargo in congested and heavily populated areas, and public concerns about maritime accidents that can cause environmental damage.

One way improvements in navigation safety and efficiency can be realized is through investments in advanced maritime information systems. Examples include systems that provide real-time information on weather, water levels, currents, and wind; electronic charts; satellite-based precision navigation systems; and vessel traffic services (VTS). Some of these systems are already available in U.S. ports and waterways, but there are gaps in deployment that need to be addressed.

A number of federal agencies share responsibilities for maintaining safe and efficient ports and waterways. To help them make decisions about implementing advanced maritime information systems, the U.S. Coast Guard, the U.S. Department of Transportation (DOT), the National Oceanic and Atmospheric Administration (NOAA), and the Maritime Administration (MARAD) asked the National Research Council (NRC) to conduct a study. A committee was convened under the auspices of the Marine Board to examine the implementation of advanced information systems to improve the safety and efficiency of waterways, transits, and maritime commerce.

The tasks assigned to the Committee on Maritime Advanced Information Systems include:

SCOPE OF THE INTERIM REPORT

Although the overall study will address the role of advanced information systems in promoting safe and efficient maritime commerce, the present interim report evaluates the implementation of navigation information systems, principally VTS and privately operated VTS-like systems. One reason for the present report is the imminent implementation of Coast Guard plans for a major new acquisition program, VTS-2000, under which VTS systems would be installed in as many as 17 ports.

This report focuses on the following topics related to the next generation of VTS systems:

Needs and conditions at U.S. ports and waterways vary greatly, making it difficult to generalize about them. This report identifies the common characteristics of ports, in terms of the need for navigation services, but also emphasizes the importance of maintaining flexibility for meeting local requirements.

HOW THE STUDY WAS CONDUCTED

A 14-member committee was convened. Members were selected for their scientific, technical, economic, policy, and practical expertise for evaluating the needs of U.S. ports and waterways and making recommendations for meeting future needs. The committee includes users of marine information systems, developers of technologies and systems, information architecture specialists, individuals with expertise in keys sectors of the maritime industry, and other stakeholders in port operations. Biographies of committee members are provided in Appendix A . The committee's work was facilitated by liaisons from the sponsoring agencies, the Marine Board, and the NRC Transportation Research Board.

The full committee met four times prior to finalizing the present interim report. The study began in October 1995 with briefings from the sponsoring agencies. The committee then organized itself into five work groups to address various issues: information mapping, implementation of navigation systems, outreach, foreign ports, and state of the art. Each work group prepared a plan of action for assembling necessary information and drafting sections of the report. In addition, the committee commissioned papers on the following topics: a search of the literature on VTS, a structure for information mapping, a review of the implementation of navigation systems, and an analysis of VTS costs and user fees.

The work group studying foreign ports visited three major ports in the United Kingdom and northern Europe, investigating the VTS systems and related institutional issues. The group also developed a questionnaire, which was sent to authorities prior to the visits. The purpose of the trip was to derive lessons for the implementation or enhancement of VTS systems in the United States.

The outreach work group conducted three workshops at key locations on the east, west, and Gulf of Mexico coasts of the United States to solicit information and the views of local stakeholders. A total of approximately 120 participants from at least 10 major port areas attended these workshops. Presentations by expert panels were followed by general discussions and question-and-answer sessions. Approximately 40 participants actively contributed to these sessions, and many provided written comments to the committee.

The full committee or subgroups of the committee visited several U.S. ports, including New York, Los Angeles/Long Beach, San Francisco, New Orleans, Tampa, and Delaware Bay. Committee members inspected a variety of VTS and VTS-like systems in operation at these locations and interviewed representatives of local interested parties. The committee also solicited written comments from vessel masters concerning their experiences with VTS systems around the world.

This report presents the results of the committee's work to date. The final report will incorporate further analyses, broaden the scope to cover additional advanced maritime information systems, and address issues concerning technical aspects and implementation in greater depth.

The committee greatly appreciates the assistance of many individuals during the initial phase of this study. The liaisons, Ed Rollison and Mike Sollosi of the Coast Guard, John Pisani of MARAD, Fred Ganjon of NOAA, William Bergen of the U.S. Army Corps of Engineers, and Michael Onder of DOT, were especially helpful. Special thanks are also extended to the dozens of individuals who participated in the outreach workshops (their names are listed in Appendix B ). The committee also wishes to thank cooperating organizations at the ports visited and guests who made presentations at committee meetings held in Washington, D.C., Long Beach, California and Tampa, Florida. Lists of these groups and individuals are included in Appendix B .

Next: EXECUTIVE SUMMARY »
Vessel Navigation and Traffic Services for Safe and Efficient Ports and Waterways: Interim Report Get This Book
× 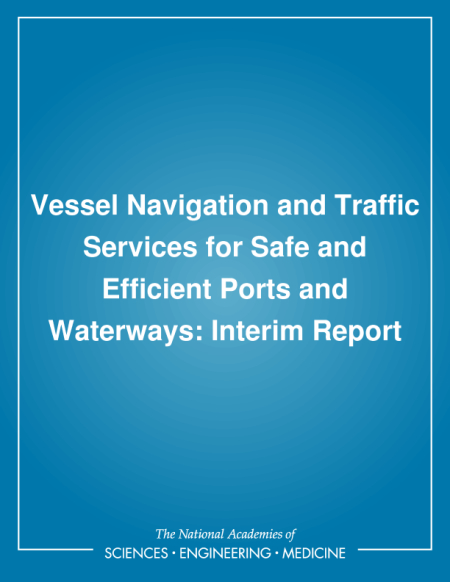