Cognitive Aspects of Survey Methodology: Building a Bridge Between Disciplines (1984)

Visit NAP.edu/10766 to get more information about this book, to buy it in print, or to download it as a free PDF.
Page i Share Cite
Suggested Citation:"Front Matter." National Research Council. 1984. Cognitive Aspects of Survey Methodology: Building a Bridge Between Disciplines. Washington, DC: The National Academies Press. doi: 10.17226/930.
×

PREFACE Cross-disciplinary collaboration is difficult. Practitioners from different disciplines could be said to live in different cultures. They see different things as important (or trivial); they use different research techniques; they have different backgrounds of understood and taken-for-granted knowledge; and they have knowledge of different specific languages in which the specialized terms of one discipline may be meaningless to another--or worse, have well-defined but differing meanings in the other discipline. Thus the comingling of disciplines can give rise to culture shock, resulting in either bewilderment and apathy or in ethnocentrism, but in either case yielding communication failure and resulting frustration. Yet Boat of us agree that collaboration between pract it loners trained in different disciplines can engender research projects that have exceptional promise, both for enriching the cultures of the parent disciplines and for creating a hybrid culture that attains its own viability and establishes its own research tradition. But how are the cultural barriers between disciplines to be overcome? The following pages report on what we consider an experiment in encouraging crosn-disciplinary collaboration. While the Advanced Research Seminar on Cognitive Aspects of Surrey Methodology--CAS`-was surely not an experiment in the statistical sense of the term, consonant with the cros-Q-disciplinary awns of the project, we shall continue to call it an experiment. The results of the experiment are not Yet in. Indeed we shall have to wait some yearn to see whether a whole new rhea arisen; only a few project ~ are carried out; or the seminar becomes merely a fond memory for the participants, little influencing their own work or that of others. But the early prospects for our results seem bright. The body of this report sketches many ideas for collaborative research that arose during the seminar and outlines some more fully formed projects that CASH participants plan to undertake. We hope that these are only the first artifacts of the comingled culture created by the seminar. Thus, while we are not yet able to state definitively whether our experiment was a success or something less, we can see already that some progress has been made in disciplinary cro~-fertilization. We present these results in the hope that readers will see the new field as one in which they might wish to carry out research and perhaps even take up some of our ideas. We have been reporting on the seminar at trar'ous professional meetings ix

and In various journals, as outlined at the end of Chapter 2. We are proselytizing. Further, we hope that readers planning other cross-disciplinary endeavors may find in our experiment some guidance for procedures. To this end, Appendix B of our report details the steps we took and the ingredients we sought in order to maximize the possibility of a favorable result of our experiment. Let me briefly sketch those steps and ingredients here. Clearly, the most important ingredient is the people who participated in the experiment. Our effort had the benefit of participation by top-flight researchers in several of the cognitive sciences, survey methodology, and applied statistics, as well as dedicated participants from the government agencies involved--the Bureau of the Census and the National Center for Health Statistics (NCHS)--and an enormously competent staff. (Note that these categories are by no means mutually exclusive; see Appendix D for biographical sketches of participants.) Second, what is needed is willingness to work hard and time in which to get the work done. Staff devoted much time before the meeting of the seminar to inviting participants, to assembling (and in some cases, preparing) background material, and to detailed and careful planning and coordination of an agenda and of social events. During the seminar, their efforts an rapporteurs kept all participants informed of everyone's progress. Participants were asked to give time beforehand to familiarize themselves with the background materials, to spend almost a week together at the seminar, to spend time after the seminar reviewing draft reports and writing up research plane, and to reassemble seven months later to review their progress. (See Appendix A for the background papers prepared for the seminar and Appendix C for a list of other background materials.) A third ingredient is what might be called the ambiance of the seminar meeting. We were together first in an attractive setting, St. Michaels, Maryland, many miles both from our offices and urban distractions or other intellectual intrusions. Our discussion~--formal and informal--often continued late into the night. Feelings of trust, intellectual respect, friendship, and tolerance for idiosyncrasies grew, and with them the excitement of shared research ideas and prospects. We had been warned that people from different disciplines would not listen to each other, but we developed a vocabulary that made cross-disciplinary communication not only possible but inviting; the image of a newly formed common culture is only slightly exaggerated. One example of the acculturation is supplied by a participant who Joined the enterprise with a research agenda that was advertised an unalterable by any outcome of the seminar. By the time the seminar reconvened in Baltimore six months later, this participant had actually carried out research to test some ideas generated at St. Michaels. Thus we feel we can write a prescription to maximize the chances of success in cron~-disciplinary collaboration. Through the support and vision of the National Science Foundation (especially from Murray Aborn) and the efforts of members and staff of the Committee on National Statistics (especially chair Stephen Fienberg and Miron Straf), together with an informal group of advisers (who came to be known as friends of the seminar and included, especially, Robert Abelson and Phillip Stone), x

we were able to assemble an excellent group of participants. Detailed planning (by all of those already listed and especially by Tom Jabine and the authors of the formal background papers--Norman Bradburn, Catalina Danis, and Roger Tourangeau) provided an appropriate and stimulating agenda for the participants. Preparatory work by the NCHS in supplying background materials and the survey instruments for the National Health Interview Survey and by the Census Bureau in interviewing participants gave us further common experiences to draw upon in our discussions. The participants themselves worked very hard in an atmosphere ideally conducive to the encouragement of cross-disciplinary collaboration. The volunteer respondents who consented to the videotaping of an interview using the NHIS questionnaire must remain anonymous and thus cannot be singled out for thanks. They should know, neverthe~ ess, that their contribution was invaluable in providing the participants with a shared resource that was used repeatedly in our discussions. All of these contributors--and others too numerous to mention but who were enormously helpful--receive heartfelt thanks from me as chair of the seminar. My fond hope is that their efforts will be so successful that they will also earn the gratitude of practitioners of the new cross-disciplinary research tradition they will have helped to start. Judith M. Tanur Montauk, New York June 14, 1984 xi

Next: CHAPTER 1 THE SEMINAR »
Cognitive Aspects of Survey Methodology: Building a Bridge Between Disciplines Get This Book
× 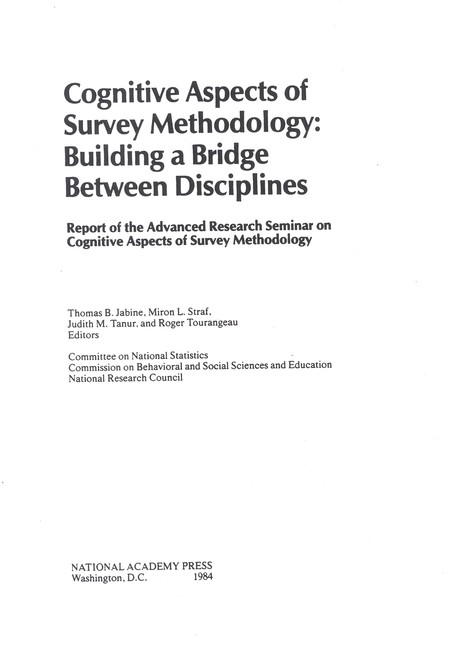