Chapter:13 Cancers Other Than Lung Cancer

Visit NAP.edu/10766 to get more information about this book, to buy it in print, or to download it as a free PDF.
« Previous: 12 Exposure to Environmental Tobacco Smoke and Lung Cancer
Page 250 Share Cite
Suggested Citation:"13 Cancers Other Than Lung Cancer ." National Research Council. 1986. Environmental Tobacco Smoke: Measuring Exposures and Assessing Health Effects. Washington, DC: The National Academies Press. doi: 10.17226/943.
×

CANCERS OTHER THAN LUNG CANCER 250 13 Cancers Other Than Lung Cancer The association of lung cancer with exposure to ETS has yielded relative risks of 2 or less for nonsmokers. As cancer of the lung is the cancer most strongly associated with active smoking, weaker effects would be expected for cancers that are less closely related to smoking. The first emphasis in this chapter is on smoking- related cancers, because these might be more plausibly associated with exposure to ETS. However, exposure to ETS occurs at earlier ages than active smoking; thus, there may be effects of ETS exposure on risk for other cancers. SMOKING-RELATED CANCERS Active tobacco smoking is an important cause not only of lung cancer, but also of bladder cancer, cancers of the pancreas and renal pelvis, and probably of the nasal sinus and kidneys. Oral, oropharyngeal, hypopharyngeal, laryngeal, and oesophageal cancers are also strongly associated with active smoking, especially in conjunction with the use of alcohol. Primary cigar and pipe smokers face a somewhat lower risk for cancer of the lung than cigarette smokers, but their risk for cancer of the larynx, pharynx, oral cavity, and esophagus is similar if not greater than that of cigarette smokers (U.S. Department of Health and Human Services, 1982). Also, lip cancer is associated with tobacco smoking, as well as pancreatic cancer and, perhaps, renal adenocarcinoma. An increased risk of cervical cancer has been observed in tobacco smokers, but

CANCERS OTHER THAN LUNG CANCER 252 not be expected to be significant for the nonsmokers analyzed separately. CANCERS NOT RELATED TO SMOKING Hirayama's (1984) study, based on a cohort of 91,450 nonsmoking Japanese women, suggested an increased mortality from brain tumors among women whose husbands smoked. The rate ratios were 3.0, 6.3, and 4.3 for exposure to husbands smoking 1â14, 15â19, or 20 or more cigarettes per day, as compared with nonsmoking wives of nonsmoking husbands as the reference group. A trend was noted for all cancer sites, but the risk elevation became insignificant when lung, nasal sinus, brain, and breast cancers were excluded. No significant associations were found for cancers of the stomach, colon, rectum, liver, peritoneum, ovary, skin, or bone, or for malignant lymphoma or leukemia. Sandler et al. (1985a,b,c), reporting on a case-control study from North Carolina, suggested an association of exposure to ETS at different periods during a lifetime with various types of cancer. People with cancer at any site, except basal cell cancer of the skin, were included in this study. The cases were drawn from a hospital-based tumor registry, irrespective of personal histories of smoking. Mailed questionnaires were used for collecting data on exposure, preceded by a telephone call for the control subjects, but not for the cases. Many of the odds ratios reported in these articles are for the combined group, as briefly reported in Table 13â1. However, some results were reported separately for nonsmoking cases (No.=231) and controls (No.=235). The results discussed below are based on the latter group and thus reflect only 31% of the total eligible patient group. The overall crude cancer risk among individuals who were ever married to smokers was 2.1 times that of those never married to smokers. Significantly elevated risks (p<0.05) were seen also for cancer of the cervix (odds ratio 2.1) and endocrine glands (odds ratio 4.4) (Sandler et al., 1985a). A nonsignificant odds ratio of 2.0 was obtained for cancer of the breast. A subset of this study involved subjects who had lived with both natural parents for most of the first 10 years of life and had information on the smoking habits of both parents and spouses.

CANCERS OTHER THAN LUNG CANCER 253 Overall cancer risks were found to increase steadily and significantly with each additional household member who smoked (Sandler et al., 1985b). The overall risk was significant only for adulthood exposure, either alone or in addition to childhood exposure (Sandler et al., 1985d). This trend appeared both for cancers traditionally associated with smoking and for other sites, with the strongest trend for the smoking-related cancers. The transplacental and childhood exposures to ETS were specifically studied in another subset of the same study; however, the data were not adjusted for prenatal exposure (Sandler et al., 1985c). There were no significantly increased risks indicated for all sites or for specific cancers. Hematopoietic-tissue-cancer risk had an odds ratio of 2.3 when maternal smoking was considered and 2.4 when paternal smoking was considered (significance not given). Cancers of hematopoietic tissues have been reported as increased in children whose mothers smoked during and after pregnancy. Neutel and Buck (1971) studied 65 cancer deaths among 89,302 children and found that the rate of leukemia among children of smokers was about twofold that of nonsmokers, but without a dose-response trend. The total number of leukemia cases in this study was 22. Manning and Carroll (1957) studied 187 cases of leukemia, 42 cases of lymphoma, and 93 other cancers among children, but found no effect of mothers' smoking habits. Neither of these studies separated the effects of in utero exposure from the exposure to ETS after birth. Two studies have evaluated all sites of cancer as a group. Miller (1984) questioned relatives of women who died between 1972 and 1976 in Erie County, Pennsylvania. He found a nonsignificant increased risk (1.40) of any cancer among women whose husbands smoked. In another study (Gillis et al., 1984), a population in Scotland was followed up 10 years after an initial screening survey for cardiovascular disease. The West of Scotland Cancer Registry was screened for subsequent incidence of cancer. Among the nonsmoking males, there were 8 cases of cancer other than lung cancer. The standardized mortality rates were actually decreased among men whose wives smoked (ratio=0.50). Among the nonsmoking women, there were 43 cases of cancer other than lung cancer, and the ratio of standardized mortality rates was nonsignificantly increased (1.26).

CANCERS OTHER THAN LUNG CANCER 254 In the study by Preston-Martin et al. (1982) of childhood brain tumors, case and control mothers were similar in use of cigarettes during pregnancy. This is in contrast to the finding that significantly more case mothers than control mothers lived in a household with a smoker. The lack of an association of risk with maternal smoking, the association of smoking behavior with other lifestyle-related exposures, and the lack of apparent adjustment for smoking status of the mother make these uncorroborated results difficult to interpret. INTERPRETATION Interpretation of these observations regarding a possible association of ETS exposure and cancers with or without previously found associations with smoking is difficult. Only a few studies have been reported, on cancer and ETS exposure other than lung cancer. The Sandler et al. (1985a,b,c) reports have been criticized for not maintaining matching (Higgins, 1985), for recruiting controls through two separate mechanisms, for conducting interviews in two different ways (telephone interviews or mailed questionnaires), and for insufficient information on other variables known to be risk factors for the various cancers that have been studied in these reports (Burch, 1985; Friedman, 1986; Mantel, 1986). The criticism of the lack of information on other known risk factors is of special concern and is also pertinent to the Hirayama study. For instance, alcohol use, reproductive and sexual histories, and occupational exposures are important risk factors for several of the cancers studied. Considering increased risks for hematological malignancies, leukemia has not been thought to be smoking- related even though there have been reports of higher leukemia risks among smokers. However, there is a possibility that inhaled lead-210, originating from the tobacco or from radon daughters attaching to ETS, could end up in the skeleton, especially in young individuals who are building up their skeletons, and would result in irradiation of the bone marrow. Such an explanation is presently highly speculative, but increased concentrations of lead-210 have been found in the skeletons of adult smokers (Holtzman and Ilcewicz, 1966; Blanchard, 1967). Adults would be less sensitive to radiation than children. Austin and Cole (1986) suggest that, in addition to the

CANCERS OTHER THAN LUNG CANCER 255 possible influence of radioactive elements, benzene, urethane, and nitrosamines may be contributing factors. All of these chemicals are found in cigarettes and ETS, and they have been shown to be leukemogenic in experimental animals, or in humans. The findings of increased brain cancer associated with ETS exposure in the Hirayama (1984) study, and possibly in the Preston-Martin et al. (1982) study, are of note. N-nitroso compounds are potent nervous system carcinogens in animals (Magee et al., 1976; Preussman, 1984, 1986). SUMMARY AND RECOMMENDATIONS These recent observations on a possible connection between ETS and various forms of cancer have created much discussion and some confusion. The lack of consistency with other data on tumors among children of smoking mothers and the appearance of tumors that are not clearly smoking-related call for further epidemiologic research. Any new studies in this area will, hopefully, have a very careful, rigorous design, so that more definitive evaluation of this possible health hazard from ETS exposure is possible. What Is Known 1. There is no consistent evidence at this time of any increased risk of ETS exposure for cancers other than lung cancer. What Scientific Information Is Missing 1. Smoking-related cancers other than lung cancer need to be studied with adequate numbers and good exposure data and with consideration of the potential confounding effects from other known risk factors for these cancers. 2. Some cancers not related to active smoking, especially lymphohematopoietic neoplasms, should be studied in relation to ETS exposure, particularly in childhood. Then the possibility of a etiologic role of inhaled decay products of radon (like bone-seeking lead-210) should be considered. REFERENCES Austin, H., and P.Cole. Cigarette smoking and leukemia. J. Chronic Dis. 39:417â421, 1986. 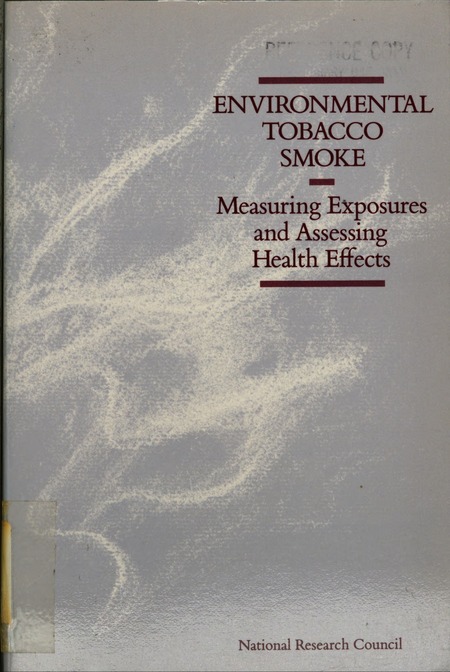 This comprehensive book examines the recent research investigating the characteristics and composition of different types of environmental tobacco smoke (ETS) and discusses possible health effects of ETS. The volume presents an overview of methods used to determine exposures to environmental smoke and reviews both chronic and acute health effects. Many recommendations are made for areas of further research, including the differences between smokers and nonsmokers in absorbing, metabolizing, and excreting the components of ETS, and the possible effects of ETS exposure during childhood and fetal life.