Get This Book
Visit NAP.edu/10766 to get more information about this book, to buy it in print, or to download it as a free PDF.
« Previous: Summary
Page 5 Share Cite
Suggested Citation:"1 Introduction." National Research Council. 1999. How People Learn: Bridging Research and Practice. Washington, DC: The National Academies Press. doi: 10.17226/9457.
×

The quest to understand human learning has, in the past four decades, undergone dramatic change. Once a matter for philosophical argument, the workings of the mind and the brain are now subject to powerful research tools. From that research, a science of learning is emerging.

In 1995, the U.S. Department of Education's Office of Educational Research and Improvement (OERI) requested that the National Research Council (NRC) synthesize research on the science of learning. The resulting report, How People Learn, reviews research literature on human learning and suggests important implications for the design of curricula, instruction, assessments, and learning environments (National Research Council, 1999a). It suggests further that many existing school practices are inconsistent with what is known about effective learning.

The purpose of this report is to ask how the insights from the research reviewed in How People Learn can be incorporated into classroom practice and to suggest a research and development agenda that would inform and stimulate the required change. The implications of the report for educational practice and its determinants are fundamental and far-reaching. Still, there are many influences on classroom practice that are unrelated to the research reviewed in How People Learn. We know, for example, that nutrition affects ability to learn. The adequacy and safety of the school can have direct influences on learning. An alternative salary structure for the teaching profession can affect the ability of schools to attract and keep qualified teachers, which in turn influences learning. We exclude these many issues here, not as a judgment regarding their significance, but because they fall outside the charge of the committee. Our focus is on the issues for which learning research gives guidance.

As a first step in framing a research and development agenda, the committee considered what would be required for insights from research to be integrated into classroom practice. The influence of research on educational practice has been weak for a variety of reasons. Educators generally do not look to research for guidance. The concern of researchers for the validity and robustness of their work, as well as their focus on underlying constructs that explain learning, often differ from the focus of educators on the applicability of those constructs in real classroom settings with many students, restricted time, and a variety of demands. Even the language used by researchers is very different from that familiar to teachers. And the full schedules of many teachers leaves them with little time to identify and read relevant research. These factors contribute to the feeling voiced by many teachers that research has largely been irrelevant to their work (Fleming, 1988).

Despite these formidable barriers, past research has at times managed to influence practice, albeit slowly and for the most part indirectly. The paths of influence, as the committee sees them, are illustrated in Figure 1.1. To a limited extent, research directly influences classroom practice when teachers and researchers collaborate in design experiments, or when interested teachers incorporate ideas from research into their classroom practice. This appears as the only line directly linking research and practice in Figure 1.1. More typically, ideas from research are filtered through the development of education materials, through pre-service and in-service teacher and administrator education programs, through public policies at the national, state, and school district level, and through the public's beliefs about learning and teaching, often gleaned from the popular media and from their own experiences in school. These are the four arenas that mediate the link between research and practice in Figure 1.1. The public includes teachers, whose beliefs may be influenced by popular presentations of research, and parents, whose beliefs about learning and teaching affect classroom practice as well.

Teachers are the key to change in this model; they are the classroom practitioners. Many excellent teachers already incorporate the principles in How People Learn into their practice, either by design or by intuition. But for those principles to be used systematically, all teachers will need opportunities to understand the principles, be persuaded of their usefulness, and be able to enact them in their classrooms. The principals who evaluate the teachers and who provide leadership in defining the schools' goals will need to be persuaded of their value as well. To achieve that goal, teacher educa-

Paths through which research influences practice.

tion and professional development programs for both teachers and administrators will need to incorporate the principles of learning.

Teachers work with teaching tools. They are unlikely to change their practice significantly in the absence of supporting curricular materials. Those who develop curricula and companion guides, software, instructional techniques, and assessments will therefore need to understand and incorporate the principles of learning into their products if teachers are to successfully change their practice.

But change at the classroom level can be supported or thwarted by public policy. For the principles in How People Learn to affect practice, district-level school boards and administrators must be persuaded of the value of that change, and must lend it legitimacy and support. Policy makers at the national and state levels will also need to understand those principles and to set policies that are consistent with them. Otherwise, teacher efforts can be undermined by standards, assessments, and teaching and textbook requirements. Moreover, the level of funding allocated to activities required for change can facilitate or debilitate the effort.

Finally, teachers, administrators, and policy makers are ultimately accountable to parents and to other stakeholders in the business community and the public. Their understanding of and support for change can be a force for advancement or resistance.

In Figure 1.1, broken rather than solid lines are used to connect research on learning to the four mediating arenas; they illustrate weak lines of influence. Because they are weak, there is often a lack of alignment among them. Consequently, teachers frequently struggle to adapt to competing demands. Strategies for change are often short-lived and responsive to fads rather than to sound research and theory.

In synthesizing a broad body of research, How People Learn provides an opportunity to strengthen the messages of research for the communities who contribute to education practice. It identifies key principles of learning that do have a firm scientific basis. It represents a beginning attempt to provide foundational knowledge that could be used to strengthen the links between research and the mediating arenas, providing a common set of assumptions about learning that could promote greater alignment among those arenas. Although the principles of learning will continue to be tested and elaborated, they will not be tomorrow's castaway fads.

How People Learn is most usefully viewed, not as a set of answers, but as the basis for a conversation among researchers and practitioners about the kinds of knowledge, tools, and resources that would promote student learning and achievement. That is how the committee has used the report. It has been the basis for conversations between committee members and those involved in education practice and policy.

Those conversations were held at two events. The first was a conference at which the findings of How People Learn were presented to an audience of over 150 researchers, educators, administrators, curriculum developers, and policy makers. Researchers and teachers who work on the development of curricula and instructional techniques presented teaching demonstrations that incorporate the principles in How People Learn. Panels of educators and policy makers provided comments on the report's findings, the potential of those findings to influence practice, and perceived barriers to change. They also offered ideas for addressing those barriers.

At a subsequent workshop, a smaller group of 25 convened to consider more specifically the research and development that might bring the insights from How People Learn into classrooms. Groups of teachers, teacher educators, researchers, and policy makers made specific suggestions to the committee. Those suggestions influenced the committee's work significantly.

The contributions of participants at both the workshop and the conference are incorporated throughout this report.

Plan of the Report

Following this introduction, Chapter 2 summarizes some of the key findings from How People Learn and outlines implications of those findings for teaching and for designing classroom environments. How People Learn is a lengthy report that covers a large field of research. Our effort here is not to summarize the entire document, but to focus on those findings and messages that are most directly relevant to classroom practice and to the mediating arenas that influence it.

Chapter 3 summarizes responses from educators and policy makers that were offered at the conference and at the workshop. More specific suggestions made by workshop participant regarding research and development are incorporated into Chapter 4, in which the committee presents its recommendations for a research and development agenda. The agenda is organized around each of the mediating arenas outlined above: educational materials, pre-service and in-service education, public policy, and public opinion and the media. In it the committee considers the research and development that would link each arena with the findings in How People Learn. The committee further recommends research that would extend the knowledge base reviewed in How People Learn in ways that directly support the goal of effective education.

Next: 2 Key Findings »
How People Learn: Bridging Research and Practice Get This Book
× 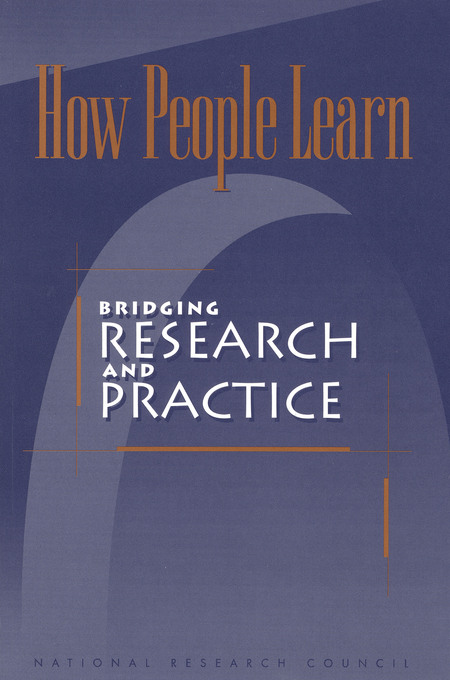 The committee identifies teachers, or classroom practitioners, as the key to change, while acknowledging that change at the classroom level is significantly impacted by overarching public policies. How People Learn: Bridging Research and Practice highlights three key findings about how students gain and retain knowledge and discusses the implications of these findings for teaching and teacher preparation. The highlighted principles of learning are applicable to teacher education and professional development programs as well as to K-12 education. The research-based messages found in this book are clear and directly relevant to classroom practice. It is a useful guide for teachers, administrators, researchers, curriculum specialists, and educational policy makers.