Get This Book
Visit NAP.edu/10766 to get more information about this book, to buy it in print, or to download it as a free PDF.
« Previous: Front Matter
Page 1 Share Cite
Suggested Citation:"Presentations: William A. Wulf." National Research Council. 1999. Collaboratories: Improving Research Capabilities in Chemical and Biomedical Sciences: Proceedings of a Multi-site Electronic Workshop. Washington, DC: The National Academies Press. doi: 10.17226/9465.
×

When I was asked to become Assistant Director of the National Science Foundation (NSF) in 1988, I had a few months before I began my new job in which to ponder what I could do that would really make a difference. It soon became perfectly clear that I could leverage the productivity of engineers and scientists, encourage interdisciplinary work, and expand the pool of researchers with information technology. The concept became known as "collaboratory"—a contraction of the words "collaboration" and "laboratory"—and consists of a computing environment that supports research among scientists and engineers that are not collocated.

For example, we talk a lot about interdisciplinary research, but the probability that the right people to attack a particular problem will be physically collocated is actually low. This is especially true in smaller institutions. Moreover, a large number of bright young Ph.D.s go to teach at four-year colleges and find a shortage of colleagues to work with either in their area or in related ones. Exacerbating this problem is the fact that instrumentation is becoming more and more crucial to research but also getting more and more expensive; we can't replicate it everywhere. There is a huge talent pool we are not tapping into because many young researchers do not have access to the best equipment.

It seemed to me that a seamless interface between a computational environment and a physical experimental environment, and possibly even a theoretical one, would help address these problems and also advance science. It also seemed obvious that we could accomplish this with the technology then available. In 1988 the Internet was reasonably fast, and we had T-1 lines1 across the country. We had what we thought were powerful workstations as well as supercomputer centers. More and more instruments were collecting data in digital form. Work on visualization had become quite advanced, and virtual reality was demonstrable. So a physical environment existed for creating collaboratories. Moreover, a community composed primarily of psychologists was beginning to study the sociology entailed in computer-supported cooperative science and engineering research. But

I had no concept of how hard it would be to move from my first insights to where we are today.

There are at least three reasons why electronically based collaboration hasn't advanced faster and further. One concerns funding. The federal bureaucracy doesn't help much in this kind of cutting-edge situation. While at NSF, I had to carve money out of my budget that was supposed to be spent on computer science—a heretical move—to support collaborative work with physicists and chemists. Moreover, information on the sociology of cooperation, although becoming available, was still sparse. I realized that the community studying that sociology had some distance to go when I found that the papers for their conference were produced on typewriters.

But the predominant reason for the slow pace in moving toward collaboratories was the relatively low demand from the research community: practicing scientists did not fully understand or appreciate the potential. And since the benefits were not obvious, they were not willing to allocate scarce research dollars for developing the needed but not well-defined tools. In an environment where everyone believes that science and engineering research is underfunded, the notion of giving up dollars that could be used to produce useful results doesn't make much sense to the bench scientist or engineer.

I have therefore spent a significant part of my time over the intervening 10 years trying to convince people of the technology's potential. Most everyone understands Moore's Law, which postulates that the density of computer chips doubles about every 18 months. But the impact of Moore's Law—and thus the potential for changing science—is sometimes hard to appreciate. One example, perhaps, can bring home this potential.

Two and one half years ago, the ENIAC, arguably the first electronic digital computer in the United States, celebrated its fiftieth anniversary. The ENIAC was built at the University of Pennsylvania, primarily to calculate ballistics tables. It weighed 30 tons, had 18,000 vacuum tubes, and filled a space roughly the size of a squash court. Today I carry a computer in my briefcase that is a hundred times faster. When I tell people that, they think I mean my laptop, but I'm referring to a Valentine's Day card that plays a tune when I open it. The computer in that card is a hundred times faster than the ENIAC. It is not a hundred times more powerful—that's a little different. But the point is that the card cost $3 and that it represents a use of technology that would have been absolutely inconceivable to anyone who built the ENIAC. Even if we had known Moore's Law, we would not have guessed this particular outcome.

Most everyone knows about IBM's marketing study that predicted a market for only half a dozen computing machines. The company was thinking in terms of computing ballistics tables. Ken Olsen, past president of Digital Equipment Corporation and probably the fastest-rising star in the 1970s, said at an annual meeting in 1978 that he could see no reason why anyone would want a computer in their home. This was two years before the introduction of the personal com-

puter. Bill Gates wondered why anyone would want more than 640 kilobytes of memory. I carry 32 megabytes now, and I wish it were 64. In each case, people made assumptions about what the technology could be used for. Bench scientists have the same problem—one we somehow have to surmount.

I must admit that I, too, made a lot of assumptions in 1988 when I began talking about collaboratories. For example, I didn't think about technology's implications for communications: 1988 was five years before the advent of the World Wide Web. I thought of electronic documents as e-mail or text files for word processing, not as hyperlinked documents with motion and sound.

I have now come to believe that the paper document is dead; we are just not aware of it yet. A user is much more likely to follow a hyperlink than to look up a reference; the effort involved is just incommensurate. Hyperlinks will change the way we write. And a few years from now we will not be able to put a research report on paper even if we want to, partly because it will contain motion and sound. We have learned about the importance of visualization and animation to the understanding of physical phenomena. That possibility is cut off when we put something on paper. Why do we hinder the communication of the understanding we ourselves gained from our animated visualizations when we try to convey that understanding to others? It doesn't make sense, and the technology that prohibits that communication—paper—is doomed as a result.

But the possibilities go much further. One of the principles of the scientific method is that scientists should be able to reproduce an experiment. In practice that doesn't happen as often as it should because the effort involved is so large. If computers further automate laboratory equipment, we may be able to embed in a research article the program that controlled the experiment. In a very real sense the article would include the experiment. I would then be able to click on a graph and not simply see the data but also feed them into my model—and feed my data into the other researcher's model. Such abilities will enable participants to reproduce and build on experiments much more easily. All of these developments will change the sociology of research. We are talking not simply about using a technology but about changing the types of questions we can ask and improving research capabilities. That is the goal.

One of my favorite prototypes for illustrating how collaboratories can change the nature and quality of science is the Space Physics and Aeronomy Research Collaboratory.2 This facility is a multidisciplinary research collaboration that allows scientists from globally dispersed sites to participate in team science and education projects. In 1993 we prepared a report entitled National Collaboratories: Applying Information Technology for Scientific Research. One of the scientists from that activity was a solar physicist, and it was from his experience and the National

What are the next steps down this road? Cooperative research projects that rely on electronic tools, whether called collaboratories or not, will occur as the natural evolution of today's research. The only question is whether we will build collaboratories more or less quickly, whether we will build them to interoperate, and whether we will develop standards that help leverage the results. This report, and the electronic town meeting on which it is based, were designed to help ensure that such leveraging would occur.

Next: James D. Myers »
Collaboratories: Improving Research Capabilities in Chemical and Biomedical Sciences: Proceedings of a Multi-site Electronic Workshop Get This Book
× 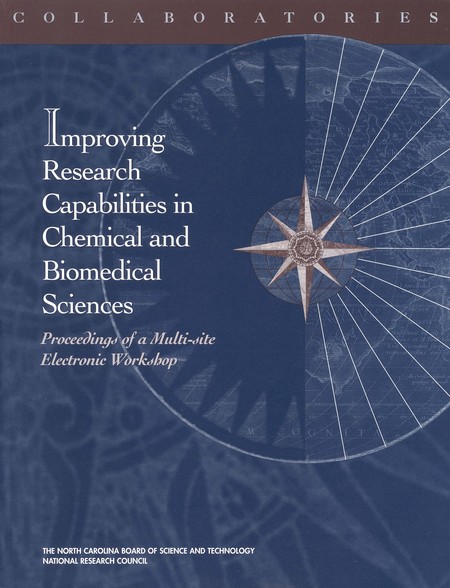