Visit NAP.edu/10766 to get more information about this book, to buy it in print, or to download it as a free PDF.
Page i Share Cite
Suggested Citation:"Front Matter." National Research Council. 1987. Vitamin Tolerance of Animals. Washington, DC: The National Academies Press. doi: 10.17226/949.
×

Preface Optimal animal health and productivity are achieved by providing an animal with the correct amount and form of each essential nutrient. Good nutritional prac- tice requires supplementing practical diets with vitamin levels that exceed the bare minimum needed to prevent deficiency diseases. Yet, vitamins added to supplement feeds, which may have lost vitamins during processing and storage, or to protect the animal from stress or stim- ulate its immune system may necessitate the use of much higher levels. The goal in animal feeding is to supplement diets with vitamin levels that are adequate for nutritional needs and accommodate the practical conditions of feed manufacture and storage. To address these concerns, the Board on Agricul- ture's Committee on Animal Nutrition appointed the Subcommittee on Vitamin Tolerance in 1983. The sub- committee's report is the most comprehensive sum- mary of current data about the vitamin tolerances of animals. It will be helpful to livestock producers, live- stock extension specialists, animal nutritionists, animal nutrition students, and others interested in the subject. The presumed upper safe levels of vitamins in this book are meant to be used as guidelines to ensure that vitamin supplementation does not adversely affect ani- mal health. The subcommittee's objectives were to fo- cus on: (1) vitamin tolerance of domestic and laboratory animals under different nutritional and physiological states, (2) biological measures that can be used as crite- ria to establish tolerance, and (3) areas of incomplete knowledge. The first two objectives were, unfortunately, impos- sible to fulfill completely. For most of the vitamins, in- formation in the scientific literature on vitamin toxicities was incomplete with respect to the range of species studied and the quantitative aspects, such as dose-response definitions. In some cases, the literature indicated rather clearly the ranges of intake that would produce certain adverse responses in certain species; in others, it indicated little evidence of toxicity. The third objective is significant. The subcommit- tee's indicated values for the presumed safe levels are limited in scope by gaps in current information. Areas lacking adequate information are identified. It is the subcommittee's hope that this report points to the limits of current knowledge and important areas of research that can contribute to improvements in animal nutrition. The following individuals were responsible for re- spective sections of the report: Robert Blair, riboflavin, vitamin B6 (pyridoxine), biotin, vitamin Bit, and choline; Gerald F. Combs, fr., vitamin E and niacin; John W. Hilton, ascorbic acid and thiamin; Ronald L. Horst, vita- min D; George E. Mitchell, Tr., vitamin A; and John W. Suttie, vitamin K, pantothenic acid, and folic acid. The report was reviewed by the Committee on Ani- mal Nutrition, the Board on Agriculture, and outside reviewers. The subcommittee is grateful for the efforts of these individuals. We also thank Annette Bates, Es- ther Collins, Karen Davis, Andra Hinds, Frances New- some, and Pamela Senter, at our respective institutions, for their administrative assistance. The subcommittee especially acknowledges the contributions of Selma Baron, who served as staff officer during the early prep-  aration of this report, and assistant editor Grace Jones Robbins, who helped us complete our task. GERALD F. COMBSS JR Chairman Subcommittee on Vitamin Tolerance · · -

Next: Introduction »
Vitamin Tolerance of Animals Get This Book
× 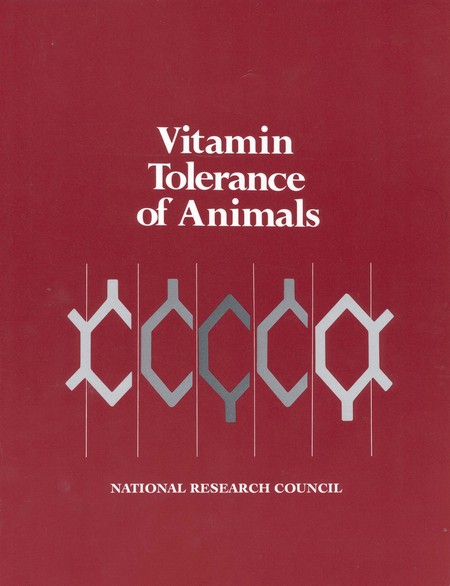 Many feedstuffs and forages do not provide the dietary vitamins necessary for optimum growth and development, making supplementation necessary. This volume offers a practical, well-organized guide to safe levels of vitamin supplementation in all major domestic species, including poultry, cattle, sheep, and fishes. Fourteen essential vitamins are discussed with information on requirements in various species, deficiency symptoms, metabolism, indications of hypervitaminosis, and safe dosages.