Testing, Teaching, and Learning: A Guide for States and School Districts (1999)

Get This Book
Visit NAP.edu/10766 to get more information about this book, to buy it in print, or to download it as a free PDF.
« Previous: References
Page 111 Share Cite
Suggested Citation:"Biographical Sketches." National Research Council. 1999. Testing, Teaching, and Learning: A Guide for States and School Districts. Washington, DC: The National Academies Press. doi: 10.17226/9609.
×

Richard F. Elmore (Chair) is professor of education and the chairman of the Department of Administration, Planning and Social Policy at the Graduate School of Education at Harvard University. He is also a senior research fellow of the Consortium for Policy Research in Education. His research focuses on state-local relations in educational policy, school organization, and educational choice. He was a member of the NRC's Commission on Behavioral and Social Sciences and Education, and was a member of the NRC's Board on Testing and Assessment from 1993 to 1997. He has a Ph.D. in educational policy from Harvard University (1976).

Eva L. Baker is professor in the Divisions of Psychological Studies in Education and Social Research Methodologies and the acting dean of the Graduate School of Education and Information Studies at the University of California, Los Angeles. She also is the co-director of the Center for Research on Evaluation, Standards and Student Testing. Her research focuses on the integration of teaching and measurement, including the design of instructional systems and new measures of complex human performances. She served on the NRC Panel on Data Confidentiality and the NAS Panel on Education Reform. She has an Ed.D. from the University of California, Los Angeles (1967).

Ruben A. Carriedo directs the planning, assessment, and accountability activities in the San Diego Unified School District. He also has served on advisory panels and as a consultant for numerous school-reform initiatives. He has an Ed.D. from the Harvard University Graduate School of Education.

Ursula Casanova is associate professor of educational leadership and policy studies in the College of Education at Arizona State University. Her research

focuses on the interface between education and culture, particularly with respect to Hispanic populations, and she is the author of numerous books and articles on putting research into practice. She has a Ph.D. in social and philosophical foundations of education from Arizona State University (1985).

Ellen C. Guiney is the executive director of the Boston Plan for Excellence in the Public Schools, a local fund that supports education reform in the Boston Public Schools. Previously, she served as the staff director of the education office of the U.S. Senate Committee on Labor and Human Resources, at the time of the passage of the Improving America's Schools Act. She has an M.A. in English from Boston College.

Kati P. Haycock is the director of The Education Trust in Washington, D.C., a national organization that works with states and districts to improve education in schools and colleges, particularly those serving low-income and minority students. She has worked as an advocate for children and youth and has written widely on raising the achievement of minority and low-income students. She has an M.A. in education policy from the University of California, Berkeley (1983).

Joseph F. Johnson, Jr., is the director of the Collaborative for School Improvement at the Charles A. Dana Center at the University of Texas at Austin. He provides technical assistance to the state education agency and local districts on the use of federal resources for excellence and equity. Previously, he served as the senior director of the Division of Accelerated Instruction at the Texas Education Agency, which administers Title I and other programs. He has a Ph.D. in education administration from the University of Texas at Austin (1992).

Sharon Lynn Kagan is a senior associate at the Bush Center in Child Development and Social Policy at Yale University and a senior research scientist at the Yale Child Study Center. She also is the president of the National Association for the Education of Young Children. Her research interests include the application of child-and parent-development research on public policy. She has an Ed.D. in curriculum and teaching from Columbia University, Teachers College (1979).

Fayneese Miller is associate professor of education and the director of the Center for the Study of Race and Ethnicity in America at Brown University. Her area of research is in social adaptation and social reasoning skills of minority adolescents. She has a Ph.D. in experimental social psychology from Texas Christian University (1981).

Jessie Montano is the director of the Division of Learner Options for the Minnesota Department of Children, Families and Learning. She is responsible for overseeing federal and state grant programs, including Title I, that support student learning and choice. She also serves as a member of the independent review panel for Title I evaluation. She has an M.A. in educational administration from Arizona State University.

P. David Pearson is the John A. Hannah distinguished professor of education in the College of Education at Michigan State University. He is the co-director of the Center for the Improvement of Early Reading Achievement, and in that role he carries out a program of research on reading instruction and assessment. He has served as a member of three NRC committees. He has a Ph.D. in education from the University of Minnesota (1969).

Stephen W. Raudenbush is professor of research design and statistics at the School of Education and senior research scientist at the Institute for Social Research, University of Michigan. His research interests include design and analysis in longitudinal and multilevel research in education. He has an Ed.D. in policy analysis and evaluation research from Harvard University (1984).

Lauren B. Resnick is a professor of psychology and the director of the Learning Research and Development Center at the University of Pittsburgh. She also is the co-director of New Standards, a national organization that has developed student-performance standards and a related system of performance assessments. Her research focuses on cognition and instruction and the design of policies and practices in school systems that reflect best learning principles. She served on the NRC Commission on Behavioral and Social Sciences and Education from 1983 to 1989, and on the NRC Mathematical Sciences Education Board from 1987 to 1990, as well as on numerous committees on testing and instruction. She has an Ed.D. in research in instruction from Harvard University (1962).

Robert Rothman (Study Director) is a program officer with the Board on Testing and Assessment at the National Research Council. Previously, he was director of special projects for the National Center on Education and the Economy and associate editor of Education Week. He is the author of Measuring Up: Standards, Assessment, and School Reform. He has a B.A. from Yale University in political science (1980).

Warren Simmons is the director of the Annenberg Institute for School Reform, a national educational research and support organization based at Brown University. Previously, he was executive director of the Philadelphia Education Fund, a nonprofit organization that collaborates with the School District of Philadelphia and local organizations to provide technical assistance and support for school reform. He has worked on numerous national and local school reform initiatives, with a particular focus on improving the education of disadvantaged students. He has a Ph.D. in psychology from Cornell University (1979).

Charlene G. Tucker is the coordinator of the high school student assessment unit for the Connecticut State Department of Education. Previously, she served in the program evaluation unit, where she conducted the evaluations for Title I. She has an Ed.D. from the University of Massachusetts at Amherst (1991).

Next: Index »
Testing, Teaching, and Learning: A Guide for States and School Districts Get This Book
× 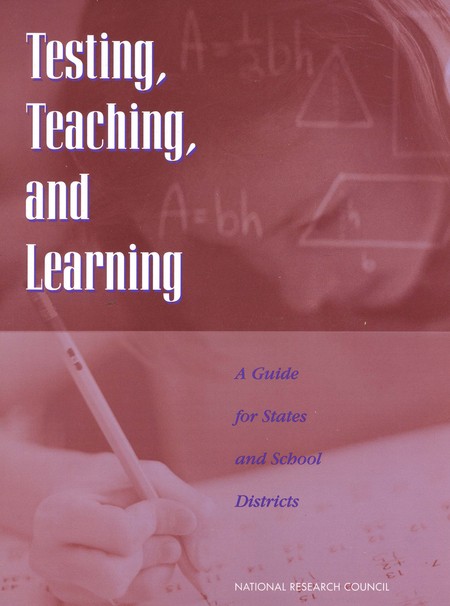 State education departments and school districts face an important challenge in implementing a new law that requires disadvantaged students to be held to the same standards as other students. The new requirements come from provisions of the 1994 reauthorization of Title I, the largest federal effort in precollegiate education, which provides aid to "level the field" for disadvantaged students.

Testing, Teaching, and Learning is written to help states and school districts comply with the new law, offering guidance for designing and implementing assessment and accountability systems. This book examines standards-based education reform and reviews the research on student assessment, focusing on the needs of disadvantaged students covered by Title I. With examples of states and districts that have track records in new systems, the committee develops a practical "decision framework" for education officials.

The book explores how best to design assessment and accountability systems that support high levels of student learning and to work toward continuous improvement. Testing, Teaching, and Learning will be an important tool for all involved in educating disadvantaged students—state and local administrators and classroom teachers.