Chapter:Appendix A: Theoretical Considerations Relevant to the Influence of Ventilation and Air Cleaning on Exposures to Indoor-Generated Pollutants

Visit NAP.edu/10766 to get more information about this book, to buy it in print, or to download it as a free PDF.
« Previous: 11 Summary of Research Recommendations and Overall Conclusions
Page 409 Share Cite
Suggested Citation:"Appendix A: Theoretical Considerations Relevant to the Influence of Ventilation and Air Cleaning on Exposures to Indoor-Generated Pollutants." Institute of Medicine. 2000. Clearing the Air: Asthma and Indoor Air Exposures. Washington, DC: The National Academies Press. doi: 10.17226/9610.
×

APPENDIX A THEORETICAL CONSIDERATIONS RELEVANT TO THE INFLUENCE OF VENTILATION AND AIR CLEANING ON EXPOSURES TO INDOOR-GENERATED POLLUTANTS Because limited empirical data are available for quantifying the effects of ventilation and air-cleaning rates on concentrations of indoor-generated pollutants (particularly particles), a steady- state mass balance model for an indoor space with perfectly mixed air has been used to generate the estimates (predictions) of these effects that are provided in Chapter 10. This appendix pre- sents the mass balance equation and provides a brief review of the behavior of indoor particles. Since only indoor-generated pollutants are being considered, the only source is the indoor pollutant generation. At equilibrium, the indoor pollutant generation rate equals the total rate of pol- lutant removal by ventilation, natural deposition on surfaces, and . , . alr cleaning. For particles of size i, the mass balance equation is G = iventC + VdepA / VC + (Qac / V)£acC, (A1) where Gi is the indoor particle generation rate per unit volume, lo is the air exchange rate equal to the rate of outside air entry Q divided by the indoor air volume V, ci is the indoor particle con- centration, Step is the particle deposition velocity, A is the indoor surface area, Qac is the rate of airflow through the air cleaner, and 409

410 CLEARING THE AIR £i is the efficiency of the air cleaner in removing particles of size i. Equation A may be solved for C i and the dependence of C i on air exchange rate, rate of airflow through the air cleaner, and particle removal efficiency examined for a range of particle sizes. The air cleaner's particle removal efficiency £i is defined by the equation £ = 1-(Cou~'e~ / C ~ (A2) with COu~'e~ equal to the concentration exiting the air cleaner. For many gaseous pollutants, an identical mass balance equation ap- plies, except that there is no size variation and the deposition ve- locity is zero for some nonreactive gases. However, Equation A1 does not apply when the steady-state indoor pollutant emission varies with the indoor air pollutant concentration the case for some volatile organic compounds (VOCs). Many VOCs may also adsorb on indoor surfaces and later desorb when the indoor VOC concentrations are lower; thus, equilibrium conditions may rarely be achieved. INDOOR AEROSOL BEHAVIOR An important source of uncertainty in the application of Equa- tion A1 is the limited current knowledge about the rate at which particles are removed from indoor air by deposition on the sur- faces inside buildings. For the largest particles, greater than a few micrometers in diameter, depositional losses are dominated by rates of gravitational settling which can be calculated with rea- sonable accuracy if the particle characteristics are known. For unit-density (1 g/cm3) particles of various sizes, Table A-1 lists gravitational settling velocities from Hinds (1982) and the time for particles to fall 1 m, approximately one-half the distance be- tween floor and ceiling in a typical room. Gravitational settling can become the dominant particle removal process for large par- ticles, such that practical changes in ventilation and air-cleaning rates change indoor particle concentrations only marginally. For submicron particles (i.e., particles smaller than 1 rim), gravita- tional settling is unimportant. Typical indoor air velocities are 0.05 to 0.3 m sol; thus, indoor particles may be transported a consider- able distance before settling on surfaces.

APPENDIX A 411 TABLE A-1 Theoretically Preclictecl Rates of Gravitation Settling of Unit Density Spheres in Still Air Aerodynamic Diameter (firm) Terminal Settling Velocity (m/s) Time to Fall 1 m 0.2 2.2 x 1 o-6 5.3 day 0.5 l.Ox10-5 28h 1.0 3.5 x 10-5 7.9 h 5.0 7.8x10 - 21min 10 0.003 330 s 20 0.012 83 s 30 0.027 37 s 50 0.075 13 s Particles also collide with and deposit on indoor surfaces due to mechanisms other than gravitational settling, and the deposi- tion rates may vary with indoor air velocities, turbulence inten- sity, and surface roughness. As larger particles are transported by indoor air motion, their momentum causes collisions with sur- faces. The random Brownian motion of the smallest particles, pro- duced by collisions with gas molecules, increases the rate of par- ticle collisions with surfaces. Electrostatic forces and other phenomena also affect particle deposition rates. Particles in an intermediate size range, about 0.2 or 0.3 ,um, have the lowest deposition rates because they have neither sufficient momentum nor Brownian motion for high deposition rates. As illustrated in Equation A1, the particle deposition velocity is used to characterize the rate of loss of particles to surfaces. The deposition velocity is the net flux of particles to indoor surfaces divided by the indoor particle concentration. For predictions, av- erage particle deposition velocities from the available experi- ments in room-size enclosures (Lad and Nazaroff, 1999) and from the settling rate of large particles have been used. These numbers are considered the best presently available; however, the uncer- tainties about typical values of deposition velocity for particles smaller than a few micrometers are large for some particle sizes. A ratio of surface area to volume, A/V, of 2.7 was used for the predictions based on information in the literature and calcula

412 CLEARING THE AIR TABLE A-2 Deposition Velocities and Corresponcling Deposition Coefficients Usecl in Calculations Aerodynamic Deposition Deposition Coefficient Diameter (firm) Velocity (m/s) with A/Vof 2.7 m-4 (hay 0.05 3x10-5 0.3 0.1 1 x 10-5 0.1 0.2 6x104 0.05 0.5 1 x10-5 0.1 1.0 2 x 10-5 0.2 2.0 5 x 10-5 0.5 5.0 1.3 x 10 - 1.3 10* 3.7 x 10 - 3.6 20* 1.5 x 10-3 15 30* 3.3x10-3 32 NOTE: All deposition velocities are based on the total indoor surface area. *For 1 0-,um and larger particles, deposition velocities were calculated from the settling rates of spherical particles with a density of 1 g/cm-3. lions. The deposition velocities and the products of the deposi- tion velocities and A/V, called the deposition coefficients, are listed in Table A-2. When particles collide with a surface, they usually adhere as a consequence of van der Waals forces, electrostatic forces, and surface tension of liquid aerosols. Adhesive forces increase in pro- portion to the first power of particle diameter (Hinds, 1982~. De- posited particles may be resuspended from indoor surfaces when the surfaces are disturbed by human activities (e.g., walking, vacuuming) or by high air velocities (e.g., the air exiting a fan). Based on theory (Hinds, 1982) and limited empirical data (Thatcher and Layton, 1995), resuspension occurs predominantly for particles larger than approximately 2 ,um. Equation A1 does not contain an explicit term for particle resuspension, but resuspension can be considered a component of the term for par- ticle generation. However, Equation A1 would not apply if a sub- stantial proportion of the deposited particles are subsequently re- suspended. At present, the resuspension of deposited particles is

APPENDIX A 413 not well understood; hence further research is needed to advance our understanding of the behavior of large particles. The forces that govern particle deposition in rooms also largely govern the removal of particles by air filters; therefore, filters tend to have minimum particle removal efficiencies for 0.2- or 0.3-,um-diameter particles. Filters have an additional removal mechanism called straining, which occurs when particles are too large to pass through openings in the filter. Equation A1 does not account for the collision and resultant coagulation of airborne particles. The coagulation rate increases with the square of the particle number concentration (Hinds, 1982~. When particle number concentrations are less than approxi- mately 104 to 105 per cubic centimeter, coagulation rates are too low relative to pollutant removal rates to have a substantial influ- ence on indoor particles. In many indoor settings, particle con- centrations are less than 104 per cubic centimeters, and the rate of coagulation is of secondary importance. An exception is a room with heavy tobacco smoking. The assumption of perfect mixing is another limitation of Equation A1. With imperfect mixing and a localized indoor par- ticle source, the benefits of ventilation or air cleaning may be en- hanced if the ventilation exhaust inlet or the inlet to the air cleaner is near the pollutant source (e.g., a kitchen range hood). Expo- sures to pollutants can also be reduced as a consequence of im- perfect mixing for example, when air with a low pollutant con- centration is supplied preferentially to the breathing zone or room containing the susceptible individual (e.g., the bedroom). The ex- posure reduction from ventilation and air cleaning can also di- minish as a consequence of imperfect mixing. As an example, large particles resuspended from surfaces may not mix through- out the indoor air because substantial particle redeposition oc- curs in less time than necessary to achieve mixing. In this case, many of the particles may not reach the inlet of the air cleaner or ventilation system, and Equation A1 will overestimate the ben- efits of increased ventilation or air cleaning. Imperfect mixing causes personal indoor particle exposures to be higher than implied by measurements of indoor particle con- centrations. In a large survey involving subjects of 150 residences (Ozkaynak et al., 1996), the average concentration of particles

Next: Appendix B: Workshop Summaries »
Clearing the Air: Asthma and Indoor Air Exposures Get This Book
× 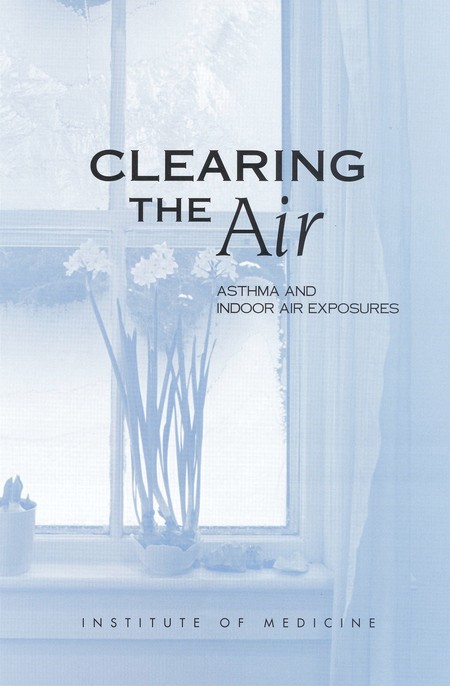 Since about 1980, asthma prevalence and asthma-related hospitalizations and deaths have increased substantially, especially among children. Of particular concern is the high mortality rate among African Americans with asthma.

Recent studies have suggested that indoor exposures—to dust mites, cockroaches, mold, pet dander, tobacco smoke, and other biological and chemical pollutants—may influence the disease course of asthma. To ensure an appropriate response, public health and education officials have sought a science-based assessment of asthma and its relationship to indoor air exposures.

Clearing the Air meets this need. This book examines how indoor pollutants contribute to asthma—its causation, prevalence, triggering, and severity. The committee discusses asthma among the general population and in sensitive subpopulations including children, low-income individuals, and urban residents. Based on the most current findings, the book also evaluates the scientific basis for mitigating the effects of indoor air pollutants implicated in asthma. The committee identifies priorities for public health policy, public education outreach, preventive intervention, and further research.