Get This Book
Visit NAP.edu/10766 to get more information about this book, to buy it in print, or to download it as a free PDF.
« Previous: Mammograms and Other Breast Imaging in Women with Implants
Page 24 Share Cite
Suggested Citation:"Recommendations." Institute of Medicine. 2000. Information for Women About the Safety of Silicone Breast Implants. Washington, DC: The National Academies Press. doi: 10.17226/9618.
×

The committee made recommendations in three general areas:

The Need for Standards

Women often cannot identify the type of implants they have and frequently have received insufficient information before making a choice about them. In the case of some older implants, there may be no surviving information about the model in question. In the early days of silicone implants, some models were custom-made for individual plastic surgeons (who patented their devices). Such implants were sometimes used without any testing. In addition, some companies produced small quantities of unusual implants.

Competition was keen in the implant business and, without any regulation, sometimes both testing and medical and/or company records fell by the wayside. Because of the lack of historical data available, some case reports describing local and systemic complications do not have information on the implant make and models involved.

U.S. implant manufacturers have changed names, been bought out, merged, become part of national and international conglomerates, or gone into bankruptcy. Many foreign implants were also introduced in the United States. Today, however, there are only two companies–Mentor and McGhan Medical–making and selling implants in the United States.

Little wonder that many women–and the committee–believe it is time for the physical and chemical characteristics of implants to be spelled out, with clear-cut information made available on existing implants and standards imposed to ensure that future changes are made only when a thorough investigation shows no possible complications or other harmful effects on safety and health. Specifically,

The IOM committee also assessed areas in which more research is needed before the safety of silicone breast implants can be fully understood. These include the following:

Next: A History of Implants »
Information for Women About the Safety of Silicone Breast Implants Get This Book
× 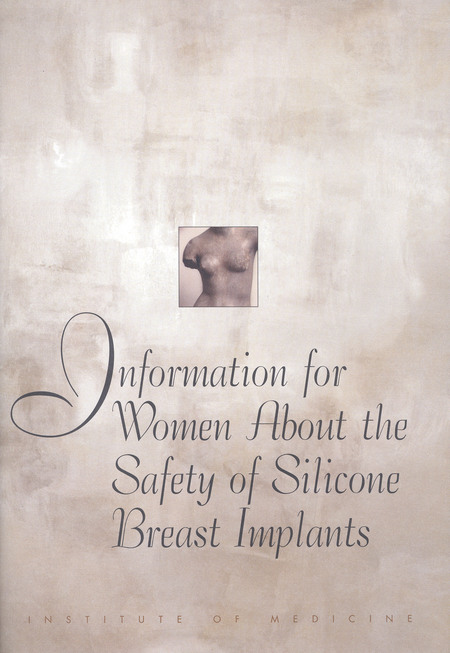