Myths and Tradeoffs: The Role of Tests in Undergraduate Admissions (1999)

Get This Book
Visit NAP.edu/10766 to get more information about this book, to buy it in print, or to download it as a free PDF.
« Previous: Tradeoffs
Page 32 Share Cite
Suggested Citation:"Topics for Further Study." National Research Council. 1999. Myths and Tradeoffs: The Role of Tests in Undergraduate Admissions. Washington, DC: The National Academies Press. doi: 10.17226/9632.
×

The charge to the steering committee was a narrow one within a complicated set of issues, and in the course of the workshop and the deliberations that led to this report a number of related topics that merit further attention emerged. This is by no means a comprehensive list of the topics that deserve further work, and the committee is well aware that these and other issues are already being explored in many contexts around the country. However, this report is intended in part as a spur to further discussion of unresolved issues surrounding admissions testing, and the committee notes a few of the questions about which further data and research would be particularly useful.

Next: References »
Myths and Tradeoffs: The Role of Tests in Undergraduate Admissions Get This Book
× 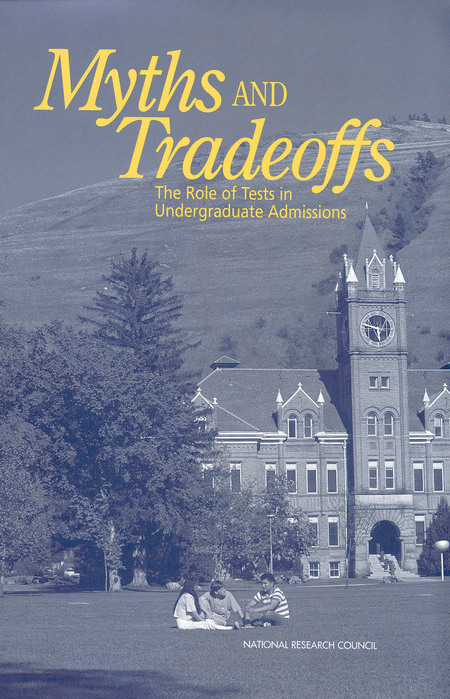 More than 8 million students enrolled in 4-year, degree-granting postsecondary institutions in the United States in 1996. The multifaceted system through which these students applied to and were selected by the approximately 2,240 institutions in which they enrolled is complex, to say the least; for students, parents, and advisers, it is often stressful and sometimes bewildering. This process raises important questions about the social goals that underlie the sorting of students, and it has been the subject of considerable controversy.

The role of standardized tests in this sorting process has been one of the principal flashpoints in discussions of its fairness. Tests have been cited as the chief evidence of unfairness in lawsuits over admissions decisions, criticized as biased against minorities and women, and blamed for the fierce competitiveness of the process. Yet tests have also been praised for their value in providing a common yardstick for comparing students from diverse schools with different grading standards.

Myths and Tradeoffs identifies and corrects some persistent myths about standardized admissions tests and highlight some of the specific tradeoffs that decisions about the uses of tests entail; presents conclusions and recommendations about the role of tests in college admissions; and lays out several issues about which information would clearly help decision makers, but about which the existing data are either insufficient or need synthesis and interpretation. This report will benefit a broad audience of college and university officials, state and other officials and lawmakers, and others who are wrestling with decisions about admissions policies, definitions of merit, legal actions, and other issues.