Get This Book
Visit NAP.edu/10766 to get more information about this book, to buy it in print, or to download it as a free PDF.
« Previous: Front Matter
Page 1 Share Cite
Suggested Citation:"Emerging Global Water and Energy Initiatives: An Integrated Perspective." National Research Council. 1999. Emerging Global Water and Energy Initiatives--An Integrated Perspective. Washington, DC: The National Academies Press. doi: 10.17226/9648.
×

The Global Energy and Water Cycle Experiment (GEWEX) Panel of the National Research Council (NRC) was tasked by the U.S. Global Change Research Program (USGCRP) to provide a rapid and succinct assessment to relevant agencies on the general merit of the GEWEX America Prediction Project (GAPP), as well as the Coordinated Enhanced Observing Period (CEOP). In addition, the panel was asked to provide guidance to the agencies on the relationships between the agencies' newly proposed hydrologic research activities (see below), GAPP, and CEOP (see Appendix A). Providing this guidance is critical, in part, because the federal agencies tend to have somewhat differing priorities across the wide span of GEWEX activities.

In recent years, awareness of the importance of water and energy cycling and water resources has grown substantially. This is manifested in a number of different types of incipient and evolving activities, recommendations, and research plans within the United States, including:

Internationally, there is also strong and growing interest manifested, for example, in the proposed GEWEX CEOP.7

The objectives of these various activities are consistent with several recent NRC reports that highlight the need for strengthened efforts in hydrologic research and applications. The 21st Century Report8 identifies ''Improved understanding of the hydrological cycle and much better measurements of atmospheric water (in all phases). . .'' as one of the emerging ". . .developments that, on the basis of [its] intrinsic value and potential economic and societal payoff, should be given high priority in the coming decades." Similarly, because "water is at the heart of both the causes and effects of climate change," the Pathways Report9 rates the water cycle as one of the highest priorities for research and observations. This sentiment is also echoed in the NRC GEWEX Panel's GEWEX Continental-Scale International Project (GCIP) Report.10

An impressive foundation for water and energy cycle research has been built in the United States by GCIP in the last nine years.10 GCIP was the first regional GEWEX project to bring together the hydrologic and meteorological science communities for a common research goal focused on water and energy cycling in the coupled land-atmosphere system. This interdisciplinary concept was adopted soon thereafter by several other international hydrometeorological projects (Mackenzie GEWEX Study (MAGS), Large-Scale Biosphere-Atmosphere Study in Amazonia (LBA), Baltic Sea Experiment (BALTEX), and GEWEX Asian Monsoon Experiment (GAME)). In addition, GCIP interacts and coordinates planning with the other international GEWEX experiments through its participation in activities under the purview of the GEWEX Hydrometeorology Panel. Building on GCIP advances, the NRC's GCIP Report made several recommendations that, to the extent possible, have been implemented in the final phases of GCIP.

Nevertheless, much work remains to be done to approach the ultimate objectives of GEWEX.11 It has been proposed, therefore, that as GCIP is phased out in 2001–2002, GAPP continue the advancement of U.S. hydrometeorological research applications. The tentative plans for GAPP draw upon the recommendations of the NRC GCIP Report to expand GCIP to the U.S. Southwest, and to develop strong linkages with the water resources management community, while continuing to pursue the core research and observational objectives of GCIP.12 In addition, GAPP proposes to continue to transfer the new regional modeling techniques, developed within GCIP and other international hydrometeorological research efforts, to global research and

operational models. While still in a draft phase, the initial plans for GAPP appear to be soundly constructed. The emphases of this program address several critical needs that have been articulated previously by the NRC. We strongly recommend that this initiative continue to be pursued.

The GEWEX CEOP (proposed for the first few years of the next century) is an ambitious international effort to capitalize on an opportunity in which a set of new generation satellites will augment the existing array of meteorological satellites in a common time period. An essential objective of CEOP is to produce a coordinated and enhanced set of globally-distributed, regional, high-resolution observations of energy and water processes linking the land surface and atmosphere. These include observations of land surface hydrology, clouds and precipitation, aerosols, and radiation under geographically diverse climate conditions. The goal is to improve modeling and predictive capabilities pertaining to the land surface and atmosphere hydrologic cycle on time scales from hourly to seasonal—an overarching GEWEX objective. It is important, however, that, as planning for CEOP progresses, its specific scientific and predictive objectives and benchmarks are clearly defined.

The simultaneity of the observational and research projects—which were designed on their own merits prior to the proposal for CEOP—constitutes an unprecedented opportunity to expand understanding of the climate system and its predictability at a broad range of time and space scales. With its objective of producing high resolution data sets particularly concentrated on the heat source and sink regions that drive and modify climate, CEOP addresses one of the critical climate monitoring needs outlined in the NRC's Climate Observing Systems report.13 For these reasons, and because it has the potential to be a powerful integrating focus of the diverse hydrometeorological research and observational programs planned for 2001–2002, the panel recommends U.S. participation in CEOP, particularly through GAPP. It will be important for U.S. involvement in CEOP to also include collaboration with Climate Variability and Predictability (CLIVAR)/Global Ocean-Atmosphere-Land System (GOALS) investigations. Of particular relevance are those that prominently involve water and energy exchanges among the land, ocean, and atmosphere (e.g., monsoon regimes), such as the CLIVAR programs studying the El Niño-Southern Oscillation, the Austral-Asian monsoon, and the

monsoon and climate of the Americas (Variability of the American Monsoon System (VAMOS) and Pan-American Climate Studies (PACS)). U.S. agencies participating in CEOP (and other international programs) should stress the importance of the free and open exchange of scientific data.14 It is expected that U.S. involvement in CEOP will be led by the agencies participating in the USGCRP and coordinated by a U.S. GEWEX Program Office and Scientific Steering Committee (SSC) (discussed below).

To maximize the returns from all relevant, ongoing, and proposed initiatives in the hydrosciences, it is vital that each initiative build upon the advances proposed by others and, at the same time, consider its potential value in meeting the needs of others. Although the United States provides major support for a U.S. GEWEX Hydrometeorology Project (GCIP/GAPP) and several GEWEX Radiation and Modeling and Prediction Projects15 that are central to accomplishing GEWEX's scientific objectives,11 the interaction between these has not been wholly effective. This is, in part, because proposals seeking funding for U.S. participation in global satellite projects must compete with each other and with GCIP/GAPP, with little coordination. Developing this coordination is especially critical if new observational systems are to feed effectively into an increased understanding of atmosphere-land-ocean-biosphere processes, fluxes, reservoirs, and improved model parameterizations, to ultimately serve diverse climate user and water resource communities (e.g., U.S. Geological Survey, Army Corps of Engineers, Bureau of Land Management, and Department of Agriculture, as well as several international activities). The fact that so many different agencies are responsible for water resource issues, in addition to those responsible for fundamental water and energy cycle research (e.g., NASA, NSF, National Oceanic and Atmospheric Administration (NOAA), and Department of Energy (DOE)), makes it very difficult to coordinate GEWEX-related projects.

Coordination of the aforementioned activities, both within the GEWEX program and with other programs, appears unlikely unless an organizing body is given the mandate to advocate and harmonize such interagency actions in real time. In a previous report,5 the NRC GEWEX Panel stated that there are sound reasons why a U.S. GEWEX Program Office should be established collaterally with the U.S. CLIVAR Program Office. In response to a USGCRP request for further input on this matter (see Appendix B for the USGCRP request), the

panel considered the pros and cons of co-locating these offices. The panel finds that its original recommendation for common infrastructures is still valid and that co-located offices would be beneficial.16

The NRC GEWEX Panel recommends that, in conjunction with the establishment of a U.S. GEWEX program office, a U.S. GEWEX SSC be established, constituted by leaders of the hydrometeorological research and water resource communities. A U.S. GEWEX SSC should advise the U.S. GEWEX Program Office and federal agencies, thereby advocating and better organizing U.S. GEWEX research. Also, a U.S. GEWEX SSC should facilitate more effective interaction with the international GEWEX programs and the developing international and U.S. CLIVAR programs. A particular goal should be to foster greater involvement of the water resources community in GEWEX-related research. In addition, an SSC should help define the national priorities in water and energy cycle research and observations and thereby avoid problems that have befallen other major U.S. climate efforts.17 The U.S. CLIVAR SSC provides a practical example by which near real-time guidance can be provided to integrate a diverse group of observational and research activities toward a common set of goals.18 Because so many of the regional and global objectives of these two major programs overlap, a coherent and coordinated approach to U.S. climate research that encompasses both viewpoints needs to be articulated.

Next: Appendix A »
Emerging Global Water and Energy Initiatives--An Integrated Perspective Get This Book
× 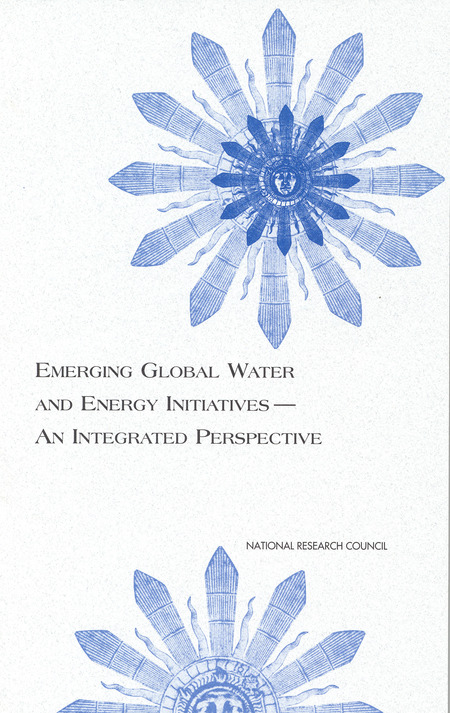 The Global Energy and Water Cycle Experiment (GEWEX) Panel of the National Research Council (NRC) was tasked by the U.S. Global Change Research Program (USGCRP) to provide a rapid and succinct assessment to relevant agencies on the general merit of the GEWEX America Prediction Project (GAPP), as well as the Coordinated Enhanced Observing Period (CEOP). In addition, the panel was asked to provide guidance to the agencies on the relationships between the agencies' newly proposed hydrologic research activities, GAPP, and CEOP. Providing this guidance is critical, in part, because the federal agencies tend to have somewhat differing priorities across the wide span of GEWEX activities.