Get This Book
Visit NAP.edu/10766 to get more information about this book, to buy it in print, or to download it as a free PDF.
« Previous: CARSON DUNNING JEFFRIES
Page 276 Share Cite
Suggested Citation:"FREDERICK GEORGE KEYES." National Academy of Sciences. 1998. Biographical Memoirs: Volume 73. Washington, DC: The National Academies Press. doi: 10.17226/9650.
× 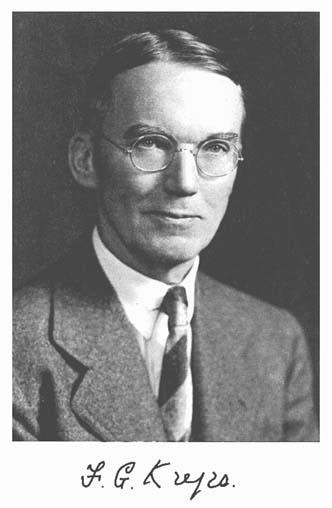 Courtesy of the Massachusetts Institute of Technology Museum

FREDERICK GEORGE KEYES was an outstanding physical chemist who made notable theoretical and experimental advances in thermodynamics, equations of state of gases, and thermodynamic properties, in particular liquid water and steam. His early professional years coincided with the establishment of physical chemistry as an important division of science. He established bridges from science to engineering, from both of these fields to industrial research, and from all of these to the creation of an American industry of scientific instruments. Further, he established early a center for low-temperature research in the United States. The treatise ''Thermodynamic Properties of Steam," known as the "Steam Tables," coauthored with J. H. Keenan of the Department of Mechanical Engineering at MIT, has been used in the design and operation of steam generating power plants worldwide.

Keyes was born in Kingston, Ontario, Canada, on June 24, 1885. In his early childhood he received private instruction from his parents, and he rejected entering high school; he preferred spending his pre-college years in experimentation in his home. His formal education was begun in college where he received a B.S. degree from Rhode Island State College in 1907 and from Brown University

an M.S. degree in 1907 and a Ph.D. degree in 1909. Keyes's doctoral thesis was in organic chemistry, but he also studied physical chemical research on bacterial metabolism. After leaving Brown University he went to the Massachusetts Institute of Technology on a postdoctoral research appointment with Professor L. J. Gillespie and then, after one year, with Professor A. A. Noyes, who was then the dean of American physical chemists. Noyes and Charles A. Kraus developed quartz-glass electric seals for mercury vapor lamps, and Keyes was employed as chief engineer for the Cooper-Yewett Electric Company during the years 1913–16.

In 1916 Keyes returned to MIT, now located at its new campus in Cambridge, Massachusetts. Keyes began research on the measurements for equations of state of gases and liquids, that is, pressure-volume-temperature relations. In 1917 this research was interrupted by the entry of the United States into World War I. Keyes joined what was later to be known as the Chemical Warfare Service. By February 1918 he had organized a complete laboratory for research and testing in chemistry, physics, and bacteriology and oversaw the shipping of that laboratory to France. In France the laboratory was located at Puteaux and was the only resource of its kind available to the American expeditionary forces in France. Keyes was cited by General Pershing for outstanding service, and he also received the Purple Heart.

After World War I Keyes returned to MIT's research laboratory for physical chemistry, then still headed by Noyes. In 1922 Noyes left MIT and joined the faculty of the Throop Institute of Technology, which later became the California Institute of Technology. In that same year Keyes became the director of the Physical Chemistry Laboratory and soon thereafter also took on the responsibility of the head of

Keyes's scientific investigations focused strongly, but far from entirely, on the thermodynamic properties of matter, predominately gases and liquid water. For example, in 1922 he coauthored a manuscript on the equation of state for methane. The work had scientific interest in that measurements of pressure-volume-temperature relations lead to information about intermolecular forces, a connection early recognized by Keyes. As typical of so much of Keyes's work, this study of methane had an important practical purpose, that of extracting helium from natural gas.

Keyes formed early a laboratory in the United States devoted to low-temperature research. He and Collins described instrumentation for such research, including the famous Collins helium cryostat.

In an extensive series of studies Keyes and his coworkers, among them Leighton B. Smith, Samuel C. Collins, and Harold T. Gerry, made highly precise measurements on pressure-volume-temperature relations for a unit mass of liquid and gaseous water. In addition, with Collins and Howard McMahon, he concentrated on the measurements of heat capacity and in particular the pressure variation of the enthalpy of steam, which is directly related to the Joule-Thomson coefficient and that in turn to molecular forces. From these and related researches Keyes and J. H. Keenan published in 1936 "The Thermodynamic Properties of Steam," known as the "Steam Tables." This authoritative and incisive work, brought up to date from time to time,

has had extraordinary influence on the design and construction of steam engines and steam turbines in the entire world. The increased economies in steam generation due to the design of steam turbines based on accurate steam data have brought savings of millions of tons of coal per year.

During World War II Keyes investigated the thermodynamic properties of hydrogen peroxide as a source of oxygen for submarines, and the scientific aspects of that work were published after the war.

In addition to equilibrium thermodynamic properties, such as the equation of state, Keyes had a longtime interest in transport processes of a variety of gases, including steam, nitrogen, the rare gases, oxygen, carbon monoxide, water, and others. He contributed here by making high precision measurements, correlation studies of the experiments from different laboratories and the connection of these properties to intermolecular forces.

Keyes published extensively from the first to the sixth decade of this century. He was deeply devoted to science as an intellectual discipline as well as an important aspect and contributor to our culture. He had the highest standards of scholarship and appreciated excellence.

During his tenure as chairman of the chemistry department at MIT, Keyes attracted several outstanding scientists, including I. Amdur, who pioneered in molecular beam research and transport processes; Walter H. Stockmayer,

renowned for his work in statistical mechanics and polymers; George Scatchard, pioneer in electrolyte chemistry and biophysical chemistry; J. Willard Stout, later the longtime editor of the Journal of Chemical Physics, and James A. Beattie, who made lasting contributions to gas thermometry and equilibrium thermodynamic measurements of gases.

Keyes was active in founding several companies devoted to producing and marketing chemical laboratory equipment in the United States. He was a holder of many patents, and remained active until near his death in Keyes Scientific Co., Inc., an industrial consulting firm in Cambridge.

In 1923 Professor Keyes married Gabriel Alice Bowers of Paris, France. Mrs. Keyes was related to the impressionist painter Pierre Bonard. The family, at least until relatively recently, had large holdings of Bonard's paintings and at one time sponsored a Bonard exhibit at the Tate Gallery in London.

By present day standards of scientists, Keyes was extraordinarily wealthy. First, he inherited wealth. He said to me once with some wistfulness that in fact he had never looked at some of the bank deposit books left to him by his father. Second, he made considerable money on his own with his founding of scientific equipment manufacturing and sales companies, with his patents, and with his investments. Third, he married into great wealth. The Keyeses, in spite of their wealth, lived a relatively simple life, with a few exceptions. Keyes loved fine cars and he owned, in the latter part of his life, three cars. One was a quite ordinary Rolls-Royce, a city car, which he maintained in Cambridge. The second car was an extraordinary Rolls-Royce Roadster, a huge car that required a sixty-gallon gasoline tank to be sure to make the trip from Cambridge to Cape Cod, where the Keyeses had extensive land holdings.

The third car was an Hispania Suissa, which was built essentially only for royalty and heads of state. This car was maintained, as all of the others, in immaculate condition, but was stationed in Paris. After knowing Keyes for many years I once asked him why he maintained this car in Paris since he very seldom, if ever, got there anymore. He replied simply, "Yes, I know John, but it is so nice to have a car when you get there."

The Keyeses and a friend of theirs purchased about 2,000 acres on Cape Cod near Truro in the early 1920s. The Keyeses' share of this land was given as a gift to MIT and ultimately MIT had to sell the land to what is now a national seashore on Cape Cod.

I first met Fred Keyes when I was a graduate student at MIT in 1948. Since I worked for I. Amdur for my Ph.D. thesis, and Keyes had his laboratories just across the hall, somehow Keyes also considered me his graduate student. I left MIT in 1952 and returned in 1966 to be chairman of the Department of Chemistry. Keyes insisted that I inherit his office, which was one of the small extravagances that he permitted himself. The office was constructed at his expense in about 1932 of Canadian white oak paneling. It had a ceiling painted blue with silver fleurs-de-lis and a fireplace. Above the fireplace was an inscription from the works of Virgil: "Felix qui potuit rerum cognoscere causas" ("Happy he who knows the causes of things"). Many years later this inscription was to become the motto of Churchill College at Cambridge. Incidentally, the fireplace had next to it a wood bin, which could be restocked from the hallway. One of the panels in this great office, when lightly touched, opened up and revealed a discreet locker for sherry (or single malt whiskeys, depending on the occupant).

Keyes was gentlemanly, soft-spoken, always impeccably dressed, and had, if not an aristocratic, then at least a

conservative authoritative demeanor. Politically he was also conservative; he stated to me on several occasions that the demise of Western Civilization could indeed be traced to the imposition of the income tax in the United States in 1913.

On December 11, 1970, MIT established the Frederick George Keyes Professorship of Chemistry and the announcement was made by James R. Killian, Jr., then chairman of the MIT Corporation. The announcement also came on the sixtieth anniversary of Keyes's association with the institute. Killian stated, "We wish to mark this anniversary in a proper way as an expression of our esteem for his distinguished career, and of our appreciation of his many different kinds of contributions to MIT." I had the privilege of being the first Frederick George Keyes professor.

1933 Methods and procedures used in the Massachusetts Institute of Technology program of investigation of the pressures and volumes of water to 460°C. Proc. Am. Acad. Arts Sci 68:505–64.

With L. B. Smith. The volumes of unit mass of liquid water and their correlation as a function of pressure and temperature. Part Ill. Steam research program. Proc. Am. Acad. Arts Sci. 69:285–314.

With L. B. Smith and H. T. Gerry. The specific volume of steam in the saturated and superheated condition together with derived values of the enthalpy, entropy, heat capacity and Joule-Thomson coefficients. Proc. Am. Acad. Arts Sci. 70:319–64.

With J. H. Keenan. Thermodynamic Properties of Steam, Including Data for the Liquid and Solid Phases. New York: J. Wiley and Sons.

1939 With S. C. Collins. Note on the year's progress in the precise measurement of the effects of intermolecular potential in gases. J. Phys. Chem. 43:5–14.

Next: HEINRICH KLUVER »
Biographical Memoirs: Volume 73 Get This Book
× 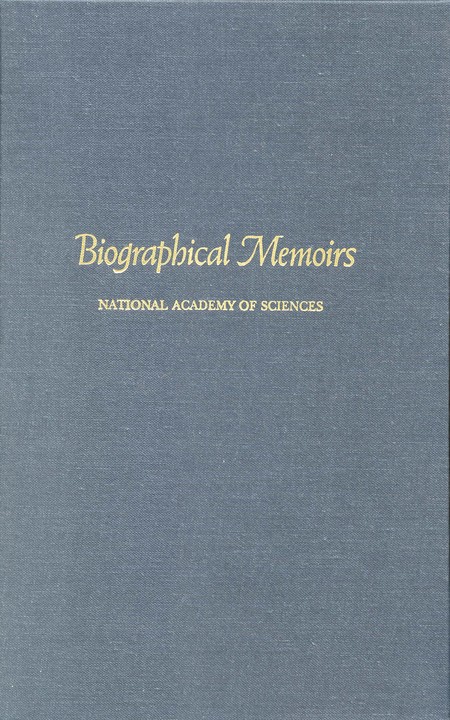 Biographic Memoirs: Volume 73 contains the biographies of deceased members of the National Academy of Sciences and bibliographies of their published works. Each biographical essay was written by a member of the Academy familiar with the professional career of the deceased. For historical and bibliographical purposes, these volumes are worth returning to time and again.