Get This Book
Visit NAP.edu/10766 to get more information about this book, to buy it in print, or to download it as a free PDF.
« Previous: Appendix D Theoretical Modeling of Adsorption
Page 80 Share Cite
Suggested Citation:"Appendix E Adsorption Separations: Alternative Modes of Operation." National Research Council. 1999. Carbon Filtration for Reducing Emissions from Chemical Agent Incineration. Washington, DC: The National Academies Press. doi: 10.17226/9651.
×

Two different methods of contacting gas with carbon adsorbent have been used in industry both of which were considered by the Chemical Stockpile Disposal Program (CSDP). These methods can result in quite different amounts of adsorbed material. The difference in adsorptive capability is explained in this appendix and the chosen methods described (the method not chosen is described in Appendix F).

In the chosen mode of operation, the gas flows through a bed (or series of beds) of solid adsorbent. Sufficient adsorbent is provided so that the operation can continue for a "long" time, from several hours to a year or more, before the bed becomes saturated. In this mode, the leading part of the bed comes to equilibrium with the inlet concentration of the compound being adsorbed. A typical concentration profile of adsorbed material is shown in Figure E-1. (The shape actually depends on the nature of the adsorption isotherm; the shape shown in Figure E-1 applies to a common type of isotherm—a "favorable" isotherm, shown in Figure E-2.)

FIGURE E-1 Typical concentration profile of a material strongly  adsorbed on a solid. 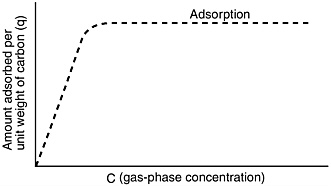 The concentration "front" shown in Figure E-1 applies to material on the solid. A similar profile applies to the gas-phase concentration; the concentration of material to be adsorbed drops almost to zero in the gas leaving the bed. The "front" will gradually move through the bed and finally break through at the end (i.e., adsorbable material will start to show in the exit gas). At that point the operation is stopped. In this type of operation, most of the solid in the bed becomes saturated (i.e., comes to equilibrium) at the inlet concentration.

The second mode of operation, which is commonly used for cleanup of flue gas, involves injecting a small amount of solid adsorbent into the flowing gas, providing sufficient contact time for the efficient use of the carbon and then separating the solid adsorbent before discharging the gas up the stack. This process has the advantage of causing less pressure drop than the "bed" operation, but the use of the adsorbent is less efficient.

This is illustrated by the following analysis based on the "favorable" isotherm shown in Figure E-2.

Let the gas flow rate be F and the solids injection rate be r. Then, as the two flow downstream together, a material balance shows: r dq: =-Fdc. Since r and F change little in the process, this equation is a straight line, as shown on Figure E-3, with slope; it goes through the initial conditions (qi assumed to be zero, and

In operation, the flow-through process may assume some of the fixed-bed properties when the solids are separated from the gas using a bag filter. The solid is allowed to build up on the filter until the pressure drop becomes excessive, when the solids are blown off. While the solids are building up on the filter bag, they act as a solid bed (i.e., the first mode of operation), enabling an increased amount to be adsorbed on the solid. An alternative means for solids separation is an electrostatic precipitator. Electrostatic precipitators do not provide the short flow time through a bed, and therefore, have lower adsorption capacity.

Both methods of implementing activated carbon pollution control systems significantly reduce the gas concentrations of adsorbed species. Data presented in Chapter 3 for the direct-injection method showed that activated carbon could reduce dioxins by 96 to 98 percent. Similar reductions have been reported for fixed-bed carbon systems (Brueggendick and Pohl, 1993; Schüller, 1994; Hartenstein, 1993, 1994). In principle, fixed-bed adsorbers can be more effective than injection systems. Prior to the time of breakthrough, the gas leaving a fixed bed comes in contact with some portion of the carbon that has little or no material adsorbed on it. 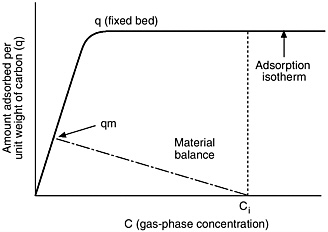 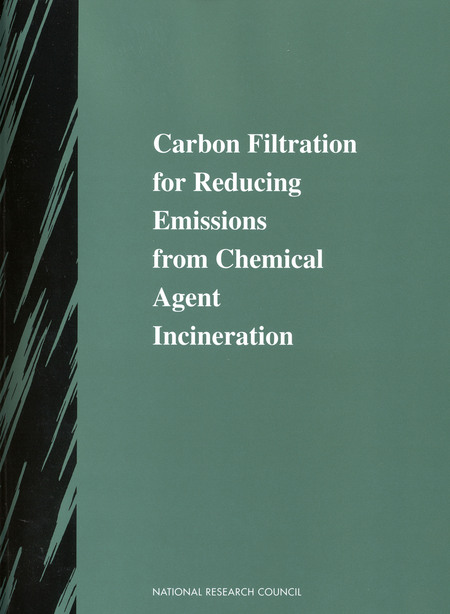 This report reviews the Army's evaluation of carbon filters for use in the baseline incineration PAS, as well as the Army's change management process (the Army's tool for evaluating major equipment and operational changes to disposal facilities). In preparing this report, members of the Stockpile Committee evaluated exhaust gas emissions testing at the two operating baseline incineration systems, JACADS and the TOCDF; evaluated the development of the dilute SOPC carbon filter simulation model; and evaluated the conceptual design of a modified PAS with an activated carbon filter. The two major risk assessments conducted for each continental disposal site that use the baseline system, namely, (1) the quantitative risk assessment, which evaluates the risks and consequences of accidental agent releases, and (2) the health risk assessment, which evaluates the potential effects of nonagent emissions on human health and the environment, were also examined.