Get This Book
Visit NAP.edu/10766 to get more information about this book, to buy it in print, or to download it as a free PDF.
Page i Share Cite
Suggested Citation:"Front Matter." National Research Council. 1999. 1999 Assessment of the Office of Naval Research's Air and Surface Weapons Technology Program. Washington, DC: The National Academies Press. doi: 10.17226/9687.
×

Committee on the Review of ONR's Air and Surface Weaponry Program

The National Research Council was organized by the National Academy of Sciences in 1916 to associate the broad community of science and technology with the Academy’s purposes of furthering knowledge and advising the federal government. Functioning in accordance with general policies determined by the Academy, the Council has become the principal operating agency of both the National Academy of Sciences and the National Academy of Engineering in providing services to the government, the public, and the scientific and engineering communities. The Council is administered jointly by both Academies and the Institute of Medicine. Dr. Bruce Alberts and Dr. William A. Wulf are chairman and vice chairman, respectively, of the National Research Council.

This work was performed under Department of the Navy Contract N00014-99-I-0502 issued by the Office of Naval Research under contract authority NR 201-124. However, the content does not necessarily reflect the position or the policy of the Department of the Navy or the government, and no official endorsement should be inferred.

The United States Government has at least a royalty-free, nonexclusive, and irrevocable license throughout the world for government purposes to publish, translate, reproduce, deliver, perform, and dispose of all or any of this work, and to authorize others so to do.

COMMITTEE ON THE REVIEW OF ONR'S AIR AND SURFACE WEAPONRY PROGRAM

USN, Office of the Chief of Naval Operations, N81

USN, Office of the Chief of Naval Operations, N91

The mission of the Office of Naval Research (ONR) is to maintain a close relationship with the research and development community to support long-range research, foster discovery, nurture future generations of researchers, produce new technologies that meet known naval requirements, and provide innovations in fields relevant to the future Navy and Marine Corps. Accordingly, ONR supports research activities across a broad range of scientific and engineering disciplines. As one means for ensuring that its investments appropriately address naval priorities and requirements and that its programs are of high scientific and technical quality, ONR requires that each of its departments undergo an annual review (with a detailed focus on about one-third of the reviewed department's programs). The Air and Surface Weapons Technology (ASWT) program resides within the Strike Technology Division of the Naval Expeditionary Warfare Science and Technology Department of ONR and accounts for approximately 25 percent of the department's budget.

At the request of ONR, the National Research Council (NRC) established a committee to review and evaluate ONR's ASWT program components in the mission areas of air superiority, precision strike, naval fire support, ship-based defense, and supporting science and technology, including uninhabited combat air vehicles, against criteria such as appropriateness of the investment strategy within the context of naval priorities and requirements, impact on and relevance to naval needs, and scientific and technical quality. In the selection of committee members, expertise was drawn heavily from the following areas: guidance and control, fire control, aeromechanics, solid and air-breathing propulsion, naval gun systems and launchers, and uninhabited combat air vehicles. The Committee on the Review of ONR's Air and Surface Weaponry Program met once, May 26–28, 1999, in Washington, D.C., to both gather information and prepare an initial draft report. The three-day meeting was divided into two parts: the first comprised presentations by and interactions with project managers (and ONR-supported principal investigators) responsible for various program components, and the second was devoted to drafting the committee's findings and recommendations and developing consensus on them.

The resulting report represents the committee's consensus views on the issues posed in the charge.

This report has been reviewed by individuals chosen for their diverse perspectives and technical expertise, in accordance with procedures approved by the National Research Council's (NRC's) Report Review Committee. The purpose of this independent review is to provide candid and critical comments that will assist the authors and the NRC in making the published report as sound as possible and to ensure that the report meets institutional standards for objectivity, evidence, and responsiveness to the study charge. The contents of the review comments and draft manuscript remain confidential to protect the integrity of the deliberative process. We wish to thank the following individuals for their participation in the review of this report:

Although the individuals listed above provided many constructive comments and suggestions, responsibility for the final content of this report rests solely with the authoring committee and the NRC.

Next: Executive Summary »
1999 Assessment of the Office of Naval Research's Air and Surface Weapons Technology Program Get This Book
× 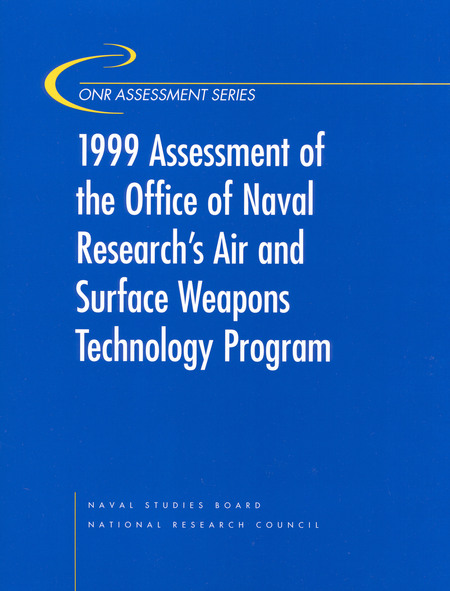