Every year more than 600 million passengers travel by U.S. air carriers. On average, each passenger checks 0.8 to 1.8 bags, depending on the characteristics of the passenger (domestic, international, business, leisure). In addition, passengers have (on average) 1.0 (leisure) and 1.5 (business) carry-on bags. One billion passenger bags per annum is not an unreasonable estimate. Assuming that the threat of an onboard explosion destroying a U.S. commercial aircraft remains relatively constant at one every 10 years, the detection of explosive devices in checked or carry-on baggage is a daunting task. Neither examining every bag physically nor screening every checked bag with deployed EDS technology is currently feasible.

One security procedure adopted for international flights is to match passengers with their checked baggage prior to the departure of the flight, commonly referred to as PPBM (positive passenger-bag matching). PPBM involves off-loading a passenger's checked baggage from the airplane if the passenger does not appear at the gate for departure. The rationale for this procedure is that a passenger will not wittingly fly on an aircraft that will be destroyed by a bomb during flight. However, this security procedure will not work for a suicide bomber or for a passenger who is unaware that he is carrying an explosive device in his baggage (a so-called "dupe").

PPBM is now used effectively for passengers on single-leg flights, but baggage matching is not maintained for multileg flights. In other words, PPBM is not repeated after the first leg of a multileg flight, either for intraairline or interairline flights. Therefore, the security afforded by PPBM is compromised for any flight that receives checked baggage from another flight. Furthermore, passengers who check their luggage at the gate may not be subject to PPBM.

The report of the White House Commission on Aviation Safety and Security (1997) indicated that profiling is just one component of a comprehensive, layered security program, and, like other security measures, profiling may become less necessary as more efficient screening technologies are introduced. Based on readily available information, passengers can be separated into a very large majority of people about whom enough is known to conclude that they present little or no risk and a small minority who merit additional attention. The commission report endorsed efforts by airlines and the FAA to develop a profiling system.

For many years, law enforcement organizations in the United States and elsewhere have used profiling systems to identify individuals who might be involved in illegal activities. The U.S. Customs Service, for example, uses a profiling system to separate known narcotics traffickers (high-risk individuals) from low-risk individuals who enter the United States via airlines, ships, or other modes of entry. U.S. Customs agents only search the bags of passengers arriving from foreign destinations who fit a known profile, thus focusing available manpower on the individuals most likely to be carrying drugs or other illegal items into the United States. The objectives of profiling are effectiveness, efficiency, practicality, and economy of resources.

The system currently used by the FAA and the airlines, called CAPS (computer-assisted passenger screening), is an automated procedure that reviews data in airline passenger records and matches those data to criteria developed by the FAA Office of Civil Aviation Security Intelligence based on

the characteristics of terrorists who have perpetrated attacks against commercial aviation. CAPS separates airline passengers into two groups, high risk and low risk. The carry-on and checked bags of high-risk passengers (called selectees in airline security parlance) are subjected to additional security measures, including either PPBM or screening by an FAA-certified EDS.

All U.S. air carriers were required to implement and use CAPS by December 31, 1998. Airline representatives have indicated that the implementation of CAPS has not created unreasonable difficulties and that CAPS is superior to a manual passenger profiling and tracking system, although most airline officials also believe it is too soon to judge the effectiveness of CAPS. The number of CAPS selectees varies by airline, route, and location but averages from 3 to 8 percent of all passengers (Padgett, 1998). Although CAPS appears to be an effective component of aviation security and is anticipated to be an important part of a TAAS for the foreseeable future, a quantitative means of evaluating its effectiveness has not been implemented.

The issue of civil liberties was raised in the White House Commission Report, which concluded that fundamental civil liberties should not, and need not, be compromised by a profiling system. The commission established a Civil Liberties Advisory Panel to investigate the issue and recommend ways to safeguard civil liberties (White House Commission on Aviation Safety and Security, 1997). The U.S. Department of Transportation also submitted the profiling elements of CAPS to the Civil Rights Division of the U.S. Department of Justice for review, which determined that CAPS did not violate the constitutional prohibitions against unreasonable searches and seizures and did not discriminate on the basis of color, gender, religion, or ethnic origin. The Department of Justice recommended, however, that the FAA periodically review the CAPS program to ensure that it adheres to constitutional requirements and civil rights laws, that airlines seek governmental approval prior to altering the program, and that employees responsible for the operation of CAPS be trained in civil liberties.

The 1997 White House Commission on Aviation Safety and Security recommended that the FAA implement full PPBM. According to the FAA's interpretation of this recommendation, full PPBM involves matching passengers, either randomly selected or identified through CAPS with their bags (GAO, 1998). The panel concluded that 100 percent baggage matching for domestic flights is not practical and that the combination of PPBM with CAPS—when fully implemented—will improve aviation security further. However, it is not clear that PPBM is continued when a selectee changes planes at a connecting airport or disembarks during a stopover. The panel believes that selectees at originating airports should be considered selectees, and therefore subject to PPBM, on subsequent connections.

CAPS appears to be effective for identifying selectees for further security measures, such as bag matching or bag screening. The panel concluded that CAPS effectively focuses personnel and equipment on high-risk passengers and does not impede the efficiency or productivity of air travel. Nevertheless, the panel believes a means of quantitatively characterizing the effectiveness of CAPS should be developed to ensure its long-term viability.

The FAA and the airlines should extend the computer-assisted passenger screening program to include interairline coordination (sharing of data for connecting passengers) and interfaces with other components of the overall security system (e.g., explosives-detection systems, positive passenger-bag matching).

The FAA should develop a quantitative measure of the performance of computer-assisted passenger screening.

Next: Human Factors »
Assessment of Technologies Deployed to Improve Aviation Security: First Report Get This Book
× 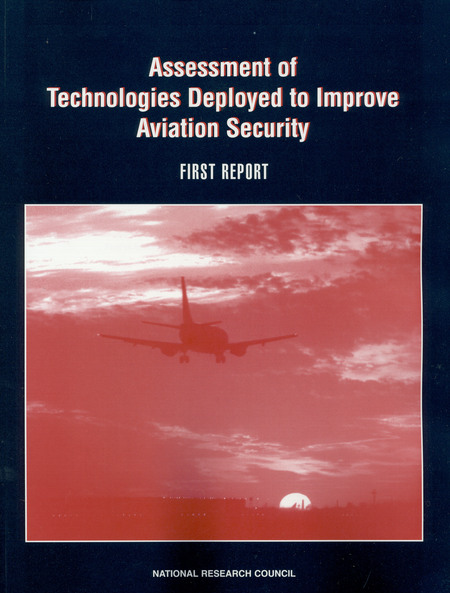