Research Teams and Partnerships: Trends in the Chemical Sciences, Report of a Workshop (1999)

Get This Book
Visit NAP.edu/10766 to get more information about this book, to buy it in print, or to download it as a free PDF.
« Previous: Appendix A: List of Workshop Participants
Page 138 Share Cite
Suggested Citation:"Appendix B: Biographical Sketches of Workshop Speakers." National Research Council. 1999. Research Teams and Partnerships: Trends in the Chemical Sciences, Report of a Workshop. Washington, DC: The National Academies Press. doi: 10.17226/9759.
×

D. Fennell Evans is the director of the Center for Interfacial Engineering and professor of chemical engineering and materials science at the University of Minnesota. He is the author of more than 180 publications on self-assembly processes in water and nonaqueous solvents, microemulsions, diffusion in liquids and micellar solutions, and characterization of surfaces using scanning probe techniques. He has published two textbooks, The Colloidal Domain and The Fundamentals of Interfacial Engineering.

Christopher T. Hill is vice provost for research and professor of public policy and technology at George Mason University in Fairfax, Virginia. He teaches courses in science and technology policy, industrial R&D, and the logic of policy inquiry. His current research is on the impacts of cooperative R&D on participating firms. Before joining George Mason University in 1994, Dr. Hill was at the RAND Critical Technologies Institute in Washington, D.C. He has also held positions at the National Academy of Engineering, the Congressional Research Service, Massachusetts Institute of Technology, Washington University in St. Louis, the Office of Technology Assessment, and the UniRoyal Corporation. He has a B.S. degree from the Illinois Institute of Technology and M.S. and Ph.D. degrees from the University of Wisconsin, all in chemical engineering. He is a registered professional engineer in the State of Missouri, and he is a consultant to the New Energy Development Organization of Japan and to the Procter & Gamble Company.

Nancy B. Jackson is a principal member of the technical staff and chair of the Catalysis Steering Committee at Sandia National Laboratories. For the past four years she has been responsible for Sandia's program development in catalysis, which has included organizing a workshop on the future of catalysis research needs for Vision 2020: The U.S. Chemical Industry, a recent symposium on Department of Energy laboratory catalysis research investigating partnerships within and among the laboratories, and she has also visited several European catalysis organizations. She is active in the American Chemical Society (ACS) as chair elect of the Catalysis Secretariat, immediate past chair of the Industrial and Engineering Chemistry Division, and a consultant to the Committee on Science.

Dr. Jackson's research interests lie primarily in the area of structure and property relationships for

heterogeneous catalytic materials, and she has investigated metal, metal oxide, and metal phosphate systems. Her work has included the study of a variety of catalytic processes including natural gas conversion to alternative fuels and commodity chemicals production. Her research often involves collaboration with universities and industrial firms.

Dr. Jackson has a B.S. degree in chemistry from George Washington University and a Ph.D. degree in chemical engineering from the University of Texas, Austin. Prior to attending graduate school she held positions at the ACS, as a U.S. Senate staff member, and the American Foreign Service Association at the U.S. State Department. She is active in issues regarding Native American education and is now chair of the ACS Committee on Minority Affairs. Jointly with her position at Sandia, she is presently an associate professor in the Department of Chemical and Nuclear Engineering at the University of New Mexico and serves on numerous advisory and editorial boards.

Henry T. (Hank) Kohlbrand is director of external technology and intellectual asset management for the Dow Chemical Company. He is one of eight directors responsible for corporate R&D at Dow. He assumed this position in 1997 and is responsible for Dow's external R&D programs, offices of science and technology in Europe and Japan, and the Intellectual Asset Management Technology Center. Previous responsibilities included corporate director of waste elimination, R&D director for engineering science and process development, and director of the Central Research Engineering Laboratory. Over his career he has worked in a number of research and manufacturing roles. In addition, he is recognized as an international expert in reactive chemicals engineering and process scale-up and has authored many publications in this area. He received a B.S. degree in chemical engineering from Illinois Institute of Technology in 1973.

Todd R. La Porte is professor of political science at the University of California, Berkeley (UCB) since 1965. Receiving his M.A. and Ph.D. degrees from Stanford University in 1962, he has taught public administration, organization theory, administrative behavior, and technology and politics at the University of Southern California and Stanford University as well as at UCB. He has published in the areas of organization theory, technology and politics, and the organizational and decision-making dynamics of large, complex, technologically intensive organizations, as well as public attitudes toward advanced technologies and the problems of governance in a technological society. He was a principle of the Berkeley High Reliability Organizations Project, a multidisciplinary team that has studied the organizational aspects of safety-critical systems such as nuclear power, air traffic control, and nuclear aircraft carriers. His current research concerns the evolution of large-scale organizations operating technologies demanding a very high level of reliable (nearly failure-free) performance and the relationship of largescale technical systems to political legitimacy, especially in the nuclear domain.

He was elected to the National Academy of Public Administration in 1985, and he was a fellow at the Woodrow Wilson International Center for Scholars, Smithsonian Institution, and a research fellow at the Wissenschaftszentrum (Sciences Center) Berlin and the Max Planck Institute for Social Research, Cologne. He has been a member of the Board on Radioactive Waste Management and panels of the Committee on Human Factors and the Transportation Research Board of the National Academy of Sciences. He served on the Secretary of Energy Advisory Board, Department of Energy, and chaired its Task Force on Radioactive Waste Management, examining questions of institutional trustworthiness. He was a member of the National Research Council's panel on Human Factors in Air Traffic Control Automation and the Technical Review Committee for the Nuclear Materials Technology Division, Los Alamos National Laboratory.

David C. Mowery is the Milton W. Terrill Professor of Business Administration at the Haas School of Business at UCB. He has been at Haas since 1988, after work at Carnegie Mellon University, the National Research Council, and the Office of the U.S. Trade Representative. His professional interests are in technological change, international trade, U.S. technology policy, and the relationship between public policies and the private sector. He received a B.A. degree in 1974 and a Ph.D. degree in economics from Stanford University in 1981.

Lura J. Powell is the director of the Advanced Technology Program (ATP) at the National Institute of Standards and Technology (NIST). ATP fosters economic growth in the United States by accelerating the development of new technology. ATP is currently leveraging more than $1 billion in industrial R&D through projects proposed by industry, cost-shared with industry, and selected through a rigorous meritbased process.

A 23-year veteran of NIST laboratory research programs, Dr. Powell was chief of the Biotechnology Division at the NIST from 1991 to 1995 where she managed programs in DNA technologies, bioprocess engineering, biosensor technology, and structural biology. Dr. Powell served as chair of the Biotechnology Research Subcommittee of the National Science and Technology Council, which coordinates all federal biotechnology research, from 1993 to 1995. She has also served as chair of the Board of Overseers of the Center for Advanced Research in Biotechnology (a joint venture between the University of Maryland, NIST, and Montgomery County, Maryland) and as vice chair of the American Society for Testing and Materials Committee E-48 on Biotechnology. Her international activities included serving on the U.S. delegations to the U.S.-European Commission Task Force on Biotechnology and the Organization for Economic Cooperation and Development Working Party on Biotechnology.

Dr. Powell has a Ph.D. degree in chemistry from the University of Maryland. She is a member of the Federal Senior Executive Service and a member of the Board of Directors of the ACS. She is the recipient of the Department of Commerce Silver Medal Award and the Outstanding Public Service Award of the Montgomery County chapter of the International Personnel Management Association.

Christine S. Sloane is technical director for the Partnership for a New Generation of Vehicles and principal research scientist at General Motors Corporate Research and Development Center. In the former capacity, she is responsible for guiding and implementing the development of energy conversion and materials technologies in collaboration with the U.S. government and domestic automakers to enable the design and manufacture of highly energy-efficient vehicles. Her earlier research interests included manufacturing process emissions, air quality and visibility, and aerosol physics. Dr. Sloane has authored over 80 technical papers and co-edited one book. She received a Ph.D. degree from the Massachusetts Institute of Technology in chemical physics and is the recipient of General Motors' John C. Campbell Award for research. She is a member of the American Association for Aerosol Research, the American Association for the Advancement of Science, the Society for Automotive Engineers, Phi Beta Kappa, Sigma Xi, and formerly the editorial board of Aerosol Science and Technology .

John C. Tao is the director of Corporate Technology Partnerships at Air Products and Chemicals, Inc. He joined Air Products in 1974 in the research department of the company's Process Systems Group. He subsequently moved into the engineering area, where he assumed program responsibility for some of the company's early energy projects. In 1980 Dr. Tao became general manager of engineering for the company's International Coal Refining Company—a former Air Products joint venture. He subsequently was named director of planning and business development for Stearns-Catalytic World Corporation—a former engineering services subsidiary of Air Products—and in 1986 joined the Corporate

Science and Technology Center. Dr. Tao was named director of research and commercial development for the advanced separations department in 1989, and was appointed director of the department in 1991. He became corporate director of environmental, health, and safety assurance in 1992, and assumed his current position in December 1994. He received a B.S. degree in chemical engineering from the Carnegie Institute of Technology, an M.S. degree in chemical engineering from the University of Delaware, and a Ph.D. degree in chemical engineering from Carnegie Mellon University. He has authored nearly 40 papers and holds nine U.S. patents. Dr. Tao is a member of the Commercial Development Association, Licensing Executive Society, Industrial Research Institute, Council of Chemical Research, and the American Institute of Chemical Engineers. He is the current chair of Chemical Industry Environmental Technology Projects and a board member of the Penn State Research Foundation and the chair of the Management Committee of the Air Products-Imperial College Strategic Alliance and the Air Products-Penn State Research Alliance. He served on the advisory council for the Chemical Engineering Department of the University of Pennsylvania, and is active in the Lehigh Valley Business-Education Partnership.

William A. Wakeham has been the pro rector (research) at Imperial College since 1996, having previously spent eight years as head of the Department of Chemical Engineering and Chemical Technology. In addition, he became deputy rector of the college in 1997 and pro rector (resources) in 1999.

Professor Wakeham is the author or editor of 6 books and over 300 papers in the field of thermophysics; he is the editor of the Journal of Chemical Thermodynamics and the chair of Commission I.2 on Thermodynamics of the International Union of Pure and Applied Chemistry and of its Subcommittee on Transport Properties. 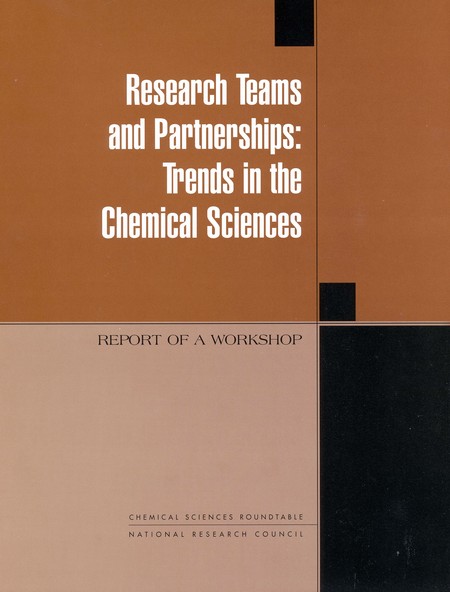 The third workshop of the Chemical Sciences Roundtable, Research Teams and Partnerships was held in Irvine, California, on May 2-3, 1999. The presentations and discussions at the workshop considered the current status of research partnerships in the chemical sciences and methods to improve the ability to form and maximize such collaborations. This volume presents the results of that workshop.