Variation and Evolution in Plants and Microorganisms: Toward a New Synthesis 50 Years After Stebbins (2000)

Visit NAP.edu/10766 to get more information about this book, to buy it in print, or to download it as a free PDF.
Page i Share Cite
Suggested Citation:"Front Matter." National Academy of Sciences. 2000. Variation and Evolution in Plants and Microorganisms: Toward a New Synthesis 50 Years After Stebbins. Washington, DC: The National Academies Press. doi: 10.17226/9766.
×

Preface âT he present book is intended as a progress report on [the] synthetic approach to evolution as it applies to the plant kingdomâ (Stebbins, 1950, p. ix). With this simple statement, G. Ledyard Stebbins formulated the objectives of Variation and Evolution in Plants (Stebbins, 1950), published in 1950, the last of a quartet of classics that, in the second quarter of the twentieth century, set forth what became known as the âsynthetic theory of evolutionâ or âthe modern synthesis.â The other books are Theodosius Dobzhanskyâs Genetics and the Origin of Species (1937), Ernst Mayrâs Systematics and the Origin of Species (1942) and George Gaylord Simpsonâs Tempo and Mode in Evolution (1944). The per- vading conceit of these books is the molding of Darwinâs evolution by natural selection within the framework of rapidly advancing genetic knowledge. Stebbins said it simply: âIn brief, evolution is here visualized as primarily the resultant of the interaction of environmental variation and the genetic variability recurring in the evolving populationâ (Stebbins, 1950, p. xi). Variation and Evolution in Plants distinctively extends the scope of the other books to the world of plants, as explicitly set in the bookâs title. Dobzhanskyâs perspective had been that of the geneticist and he set the tone for the others, Mayrâs that of the zoologist and systematist, and Simpsonâs that of the paleobiologist. All four books were outcomes of the famed Jesup Lectures at Columbia University. Plants, with their unique genetic, physiological and evolutionary features, had all but been left completely out of the synthesis until that point. In 1941, the eminent v

vi / Preface botanist Edgar Anderson, had been invited to write botanyâs analogue to Mayrâs Systematics and the Origin of the Species and to publish it jointly with Mayrâs book. Anderson did not fulfill the task, and Stebbins was thereafter invited to deliver the Jesup Lectures in 1947. Variation and Evo- lution in Plants is the outgrowth of the Lectures. The mathematical underpinnings of the modern synthesis were set between 1918 and 1931 by R. A. Fisher (1930) and J.B.S. Haldane (1932) in Britain, and Sewall Wright (1931) in the United States. According to Dar- win, evolutionary change occurs by natural selection of small individual differences appearing every generation within any species. Any change effected by selection is typically small but they amount to major change over time. Thomas Huxley and Francis Galton, among Darwinâs most dedicated supporters, argued instead that evolution occurs by selection of discontinuous variations, or sports; evolution proceeds rapidly by dis- crete leaps. Natural selection operating only upon gradual differences among individuals, could hardly account, in Huxleyâs view, for the gaps between existing species evident in the paleontological record. According to Galton, evolution proceeds by âjerks,â some of which imply consider- able organic change, rather than as a smooth and uniform process. In the latter part of the nineteenth century, the biometricians Karl Pearson and W.F.R. Weldon believed, like Darwin, in the primary impor- tance of common individual differences. Like other geneticists, William Bateson argued, rather, for the primary importance of discontinuous vari- ations. The controversy was acrimonious. The rediscovery of Mendelian inheritance in 1900 might have served as the common grounds to resolve the conflict. Instead, the dispute between biometricians and geneticists extended to continental Europe and to the United States. Bateson was the champion of the Mendelians, many of whom accepted the mutation theory proposed by De Vries (1900), and denied that natural selection played a major role in evolution. The biometricians for their part argued that Men- delian characters were sports of little significance for the evolutionary process. Fisher, Haldane, and Wright advanced theoretical models of evo- lutionary processes based on the natural selection of genetic changes (mu- tations) that are individually small, but are cumulatively of great conse- quence. Theodosius Dobzhansky first and, then, Mayr, Simpson, and Stebbins (and, less notably, many others) completed the mathematiciansâ theoreti- cal propositions with a wealth of biological knowledge and empirical support. Stebbins was particularly suited to bring in the evidence from plants. He was born in 1906 and had become interested in natural history from childhood. He started botanizing in his early teens while a student at Cate School in Santa Barbara (California). As an undergraduate at Harvard (1924â1928) he came under the influence of Merritt Lyndon Fer-

Preface / vii nald (1873â1950), a charismatic teacher and distinguished botanist, whom Stebbins accompanied on field trips to study the New England flora. In 1928, Stebbins became a graduate student at Harvard and worked on the cytology, geographic variation, and seed development of Antennaria, a genus that bore several apomictic species that could be collected in nearby localities. The distinctive evolutionary role of vegetative reproduction in plants would remain a focus of interest to the end of his life. The 17 papers that follow were presented at a colloquium sponsored by the National Academy of Sciences, âVariation and Evolution in Plants and Microorganisms. Towards a New Synthesis 50 Years after Stebbins.â The colloquium, held at the Beckman Center of the National Academies, in Irvine, California, January 27â29, 2000, sought to celebrate the 50th anniversary of the publication of Stebbinsâ classic. Professor Stebbins, although frail for the last few years, intended to attend the colloquium. Alas, he became ill around Christmas time and died on January 19, 2000, a few days before the colloquium was held, just about two weeks after his 94th birthday, on January 6. The âAppreciationâ (Chapter 1) was read by Peter Raven, after dinner on January 28th, at the time and place that had been reserved for Stebbinsâ own words. The 16 papers following the âAp- preciationâ are organized into five successive sections: Early Evolution and the Origin of Cells, Virus and Bacterial Models, Protoctist Models, Population Variation, Trends and Patterns in Plant Evolution. We are grateful to the National Academy of Sciences for the generous grant that financed the colloquium, to the staff of the Arnold and Mabel Beckman Center for their skill and generous assistance, and to Mrs. Denise Chilcote, who performed the administrative functions of the colloquium with skill and dedication. REFERENCES De Vries, H. (1900) Sur les unitÃ©s des caractÃ¨res spÃ©cifiques et leur application Ã¡ lâÃ©tude des hybrides. Rev. Gen. Bot. 12, 257â271. Dobzhansky, Th. (1937) Genetics and the Origin of Species (Columbia University Press, New York); 2nd Ed., 1941; 3rd Ed., 1951. Fisher, R. A. (1930) The Genetical Theory of Natural Selection (Clarendon, Oxford). Haldane, J. B. S. (1932) The Causes of Evolution (Harper, New York). Mayr, E. (1942) Systematics and the Origin of Species (Columbia University Press, New York). Simpson, G. G. (1944) Tempo and Mode in Evolution (Columbia University Press, New York). Stebbins, G. L. (1950) Variation and Evolution in Plants (Columbia University Press, New York). Wright, S. (1931) Evolution in mendelian populations. Genetics 16, 97â159.

Contents / xi 15. Reproductive Systems and Evolution in Vascular Plants 271 Kent E. Holsinger 16. Hybridization as a Stimulus for the Evolution of Invasiveness in Plants? 289 Norman C. Ellstrand and Kristina A. Schierenbeck 17. The Role of Genetic and Genomic Attributes in the Success of Polyploids 310 Pamela S. Soltis and Douglas E. Soltis Index 331

Next: Part I EARLY EVOLUTION AND THE ORIGIN OF CELLS »
Variation and Evolution in Plants and Microorganisms: Toward a New Synthesis 50 Years After Stebbins Get This Book
× 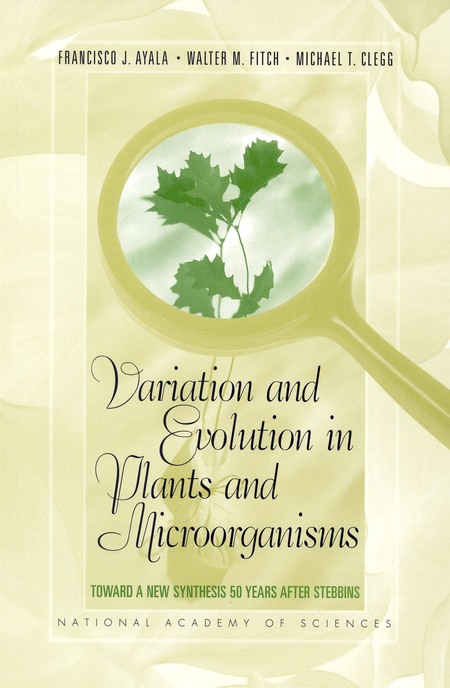 "The present book is intended as a progress report on [the] synthetic approach to evolution as it applies to the plant kingdom." With this simple statement, G. Ledyard Stebbins formulated the objectives of Variation and Evolution in Plants, published in 1950, setting forth for plants what became known as the "synthetic theory of evolution" or "the modern synthesis." The pervading conceit of the book was the molding of Darwin's evolution by natural selection within the framework of rapidly advancing genetic knowledge.

At the time, Variation and Evolution in Plants significantly extended the scope of the science of plants. Plants, with their unique genetic, physiological, and evolutionary features, had all but been left completely out of the synthesis until that point. Fifty years later, the National Academy of Sciences convened a colloquium to update the advances made by Stebbins.

This collection of 17 papers marks the 50th anniversary of the publication of Stebbins' classic. Organized into five sections, the book covers: early evolution and the origin of cells, virus and bacterial models, protoctist models, population variation, and trends and patterns in plant evolution.