Get This Book
Visit NAP.edu/10766 to get more information about this book, to buy it in print, or to download it as a free PDF.
« Previous: Appendix A: Hardware Available or in Development and Schedule for Biotechnology Research on the International Space Station
Page 62 Share Cite
Suggested Citation:"Appendix B: Biographical Sketches of Task Group Members." National Research Council. 2000. Future Biotechnology Research on the International Space Station. Washington, DC: The National Academies Press. doi: 10.17226/9785.
×

PAUL B. SIGLER (1934-2000), Chair, was the Henry Ford II Professor of Molecular Biophysics and Biochemistry at Yale University and an investigator of the Howard Hughes Medical Institute. His research focused on macromolecular crystallography and structure, genetic regulation, transmembrane signaling, and chemical mechanisms in cellular regulation. Dr. Sigler was a member of the National Academy of Sciences and a fellow of the American Academy of Arts and Sciences.

ADELE L. BOSKEY is director of research at the Hospital for Special Surgery and professor of biochemistry and cell and molecular biology at the Cornell University Medical College. She investigates calcium phosphate crystal deposition within the extracellular matrices of bones, teeth, ligaments, and tendons in mammals using solution, cell culture, and in vivo models. Dr. Boskey has had experiments fly on the space shuttle in 1994 and 1996, and has served on NIH-NASA advisory panels. She is a past president of the Orthopaedic Research Society.

NOEL D. JONES retired from Eli Lilly and Company as a research advisor and group leader of macromolecular structure research, after 27 years with the company. He has many years of experience in macromolecular crystallography research, drag design, and research management. His special expertise is in the development of instrumentation for growing protein crystals and for rapid diffraction data collection. He later served as vice president of Drug Design for the Molecular Structure Corporation. Dr. Jones has frequently served on NIH, NASA, and DOE review panels for the evaluation of research programs.

JOHN KURIYAN is a professor in the Laboratories of Molecular Biophysics at the Rockefeller University and an investigator of the Howard Hughes Medical Institute. He conducts research on the structural biology of cellular signaling and DNA replication signal transduction. He received the Young Investigator Award from the Protein Society in 1997 and the Eli Lilly Award from the American Chemical Society in 1998. He is currently on the editorial boards of Structure and Cell.

WILLIAM M. MILLER is a professor of chemical engineering at Northwestern University. He specializes in cell and tissue culture applications in biotechnology and medicine. Particular areas of research include therapeutic proteins, ex vivo expansion of hematopoietic cells, and epithelial cell models of in vivo responses. He has received a Presidential Young Investigator Award from the National Science Foundation and has chaired the Food, Pharmaceutical, and Bioengineering Division of the American Institute of Chemical Engineers.

MICHAEL L. SHULER is a professor of chemical engineering at Cornell University. He is an expert in bioengineering and performs research in the areas of heterologous protein expression systems, cell culture analogs for pharmocokinetic models, in vitro toxicology, plant cell tissue culture, biodegradation, and bioremediation. Dr. Shuler is a member of the National Academy of Engineering, a fellow of the American Institute for Medical and Biological Engineering, and a member of the American Academy of Arts and Sciences.

BI-CHENG WANG is a professor of biochemistry and molecular biology at the University of Georgia. He conducts research on the structure and function of biological macromolecules, including bacteriophage and E. coli RNA polymerases. Dr. Wang is the past president of the Diffraction Society and co-editor of Crystallographic Reviews. Before coming to Georgia in 1995, he was a professor of crystallography and biological sciences at the University of Pittsburgh. He has been involved in experiments aboard the space shuttle and the Russian space station Mir that aimed to grow low-defect macromolecular crystals in microgravity.

Next: Appendix C: Statement of Task »
Future Biotechnology Research on the International Space Station Get This Book
× 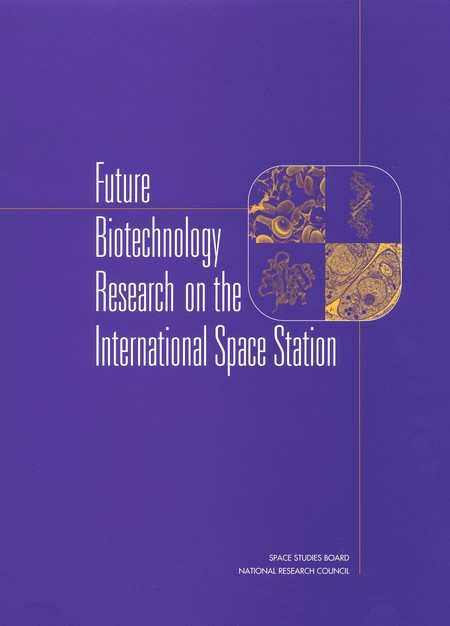 Under current NASA plans, investigations in the area of biotechnology will be a significant component of the life sciences research to be conducted on the International Space Station (ISS). They encompass work on cell science and studies of the use of microgravity to grow high-quality protein crystals. Both these subdisciplines are advancing rapidly in terrestrial laboratories, fueled by federal and industrial research budgets that dwarf those of NASA's life science program. Forging strong and fruitful connections between the space investigations and laboratory-bench biologists, a continual challenge for NASA' s life sciences program, is thus of great importance to ensuring the excellence of ISS research.

This report evaluates the plan for NASA's biotechnology facility on the ISS and the scientific context that surrounds it, and makes recommendations on how the facility can be made more effective. In addition to questions about optimizing the instrumentation, the report addresses strategies for enhancing the scientific impact and improving the outreach to mainstream terrestrial biology. No major redirection of effort is called for, but collectively the specific, targeted changes recommended by the task group would have a major effect on the conduct of biotechnology research in space.