The Impact of Selling the Federal Helium Reserve (2000)

Get This Book
Visit NAP.edu/10766 to get more information about this book, to buy it in print, or to download it as a free PDF.
Page i Share Cite
Suggested Citation:"Front Matter." National Research Council. 2000. The Impact of Selling the Federal Helium Reserve. Washington, DC: The National Academies Press. doi: 10.17226/9860.
×

THE IMPACT OF SELLING THE FEDERAL HELIUM RESERVE

Committee on the Impact of Selling the Federal Helium Reserve

Board on Physics and Astronomy

This study by the Board on Physics and Astronomy and the National Materials Advisory Board was conducted under contract number 1422-N66-C98-3002 with the Department of the Interior. Any opinions, findings, conclusions, or recommendations expressed in this publication are those of the author(s) and do not necessarily reflect the views of the organization or agency that provided support for the project.

Available in limited numbers from:

Board on Physics and Astronomy

The National Research Council was organized by the National Academy of Sciences in 1916 to associate the broad community of science and technology with the Academy's purposes of furthering knowledge and advising the federal government. Functioning in accordance with general policies determined by the Academy, the Council has become the principal operating agency of both the National Academy of Sciences and the National Academy of Engineering in providing services to the government, the public, and the scientific and engineering communities. The Council is administered jointly by both Academies and the Institute of Medicine. Dr. Bruce M. Alberts and Dr. William A. Wulf are chairman and vice chairman, respectively, of the National Research Council.

COMMITTEE ON THE IMPACT OF SELLING THE FEDERAL HELIUM RESERVE

Resources for the Future

BOARD ON PHYSICS AND ASTRONOMY

University of California at San Diego,

COMMISSION ON ENGINEERING AND TECHNICAL SYSTEMS

The Cooper Union for the Advancement of Science and Art

University of Michigan at Dearborn

University of Massachusetts at Amherst

In 1996 the U.S. Congress passed the Helium Privatization Act (P.L. 104-273), which ordered the Department of the Interior to begin liquidating the U.S. Federal Helium Reserve by 2005 in a manner consistent with "minimum market disruption" and at a price given by a formula specified in the act. Helium is a rare and nonrenewable resource, however, with many properties critical to a number of important technologies in the commercial, military, and fundamental scientific research sectors. Unlike ordinary goods and services that can be produced virtually forever, every unit of helium that is produced and consumed today will eventually escape Earth's atmosphere and become one less unit available for use tomorrow. The prospect of liquidating the U.S. Federal Helium Reserve is thus a matter of great concern in the commercial, academic, and government sectors. In response to this concern, the Helium Privatization Act also mandated, in Section 8, that the Department of the Interior "enter into appropriate arrangements with the National Academy of Sciences to study and report on whether such disposal of helium reserves will have a substantial adverse effect on U.S. scientific, technical, biomedical, or national security interests."

This report is the product of that mandate and was conducted by a committee, the Committee on the Impact of Selling the Federal Helium Reserve, convened under the auspices of the Board on Physics and Astronomy and the National Materials Advisory Board of the National Research Council (NRC), which is the operating arm of the National Academy of Sciences and the National Academy of Engineering. Nine committee members (none of whom are in the helium supply business) were carefully selected by the NRC to provide a suitable range of expertise and an appropriate balance of experience in helium usage, helium-based research and development, and resource economics. To provide a meaningful context for this effort, the committee examined the helium market and the helium industry as a whole, in order to determine how the users of helium would be affected under various scenarios for selling off the reserve within the constraints set forth in the pertinent legislation. The committee did not assess the pricing

strategy spelled out in the legislation because that issue lies outside of its charge. Specifically, the committee's task incorporated the following elements:

To accomplish its task, the committee collected information from four main sources:

In each of the cases, the committee permitted the main communities to organize their own briefing sessions. The agendas of the four meetings of the committee, the third of which included the user's workshop, are presented in Appendix A.

The committee's deliberations are organized in six chapters. Chapter 1 provides an overview of the properties that make helium unique and a history of helium's discovery and usage. Chapter 2 details the contents of the federal legislation and the capabilities of the U.S. Federal Helium Reserve in Amarillo, Texas. Chapters 3 and 4 provide overviews of helium demand and supply respectively. The economics of the helium market are reviewed in Chapter 5, and the committee's findings and recommendations concerning the potential long-term consequences of the sale of the Federal Helium Reserve are discussed in Chapter 6.

Committee on the Impact of Selling the Federal Helium Reserve

The committee would like to thank the following people for their support of this project and for ensuring that the committee had prompt access to all of the information it required: Robert Doyle of the Department of the Interior's Bureau of Land Management (BLM), Timothy Spisak of BLM, Carl T. Johnson, president of the Compressed Gas Association, and Robert Park of the American Physical Society. The committee would also like to thank Arthur Francis of AWF Consulting, who provided comprehensive briefings and valuable insight into the history and development of the Federal Helium Reserve.

Finally, the co-chairs of the committee thank the committee members for their dedication and patience during the course of this study. It could not have been completed without their diligence and goodwill.

These proceedings have been reviewed by individuals chosen for their diverse perspectives and technical expertise, in accordance with procedures approved by the National Research Council's (NRC's) Report Review Committee. The purpose of this independent review is to provide candid and critical comments that will assist the authors and the NRC in making the published report as sound as possible and to ensure that the report meets institutional standards for objectivity, evidence, and responsiveness to the study charge. The contents of the review comments and the draft manuscript remain confidential to protect the integrity of the deliberative process. The committee wishes to thank the following individuals for their participation in the review of this report:

Although the individuals listed above have provided many constructive comments and suggestions, the responsibility for the final content of this report rests solely with the authoring committee and the NRC.

Next: Executive Summary »
The Impact of Selling the Federal Helium Reserve Get This Book
× 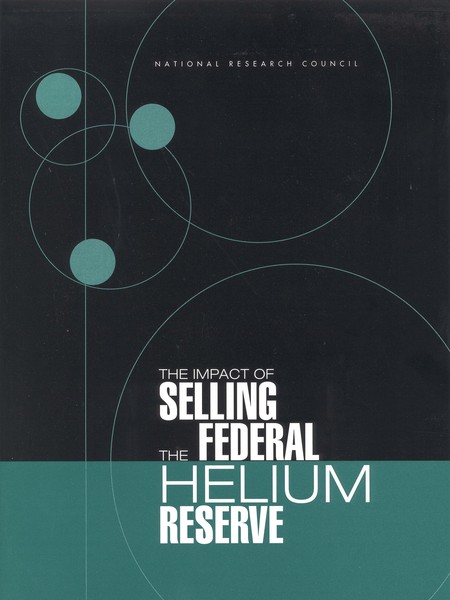 The Helium Privatization Act of 1996 (P.L. 104-273) directs the Department of the Interior to begin liquidating the U.S. Federal Helium Reserve by 2005 in a manner consistent with "minimum market disruption" and at a price given by a formula specified in the act. It also mandates that the Department of the Interior "enter into appropriate arrangements with the National Academy of Sciences to study and report on whether such disposal of helium reserves will have a substantial adverse effect on U.S. scientific, technical, biomedical, or national security interests."

This report is the product of that mandate. To provide context, the committee has examined the helium market and the helium industry as a whole to determine how helium users would be affected under various scenarios for selling the reserve within the act's constraints.