Get This Book
Visit NAP.edu/10766 to get more information about this book, to buy it in print, or to download it as a free PDF.
Page i Share Cite
Suggested Citation:"Front Matter." National Academy of Sciences. 1988. Biodiversity. Washington, DC: The National Academies Press. doi: 10.17226/989.
×

The National Academy of Sciences was chartered by Congress in 1863 as a private, nonprofit organization dedicated to the furtherance of science and engineering for the public welfare. In 1916 the National Research Council was organized, enabling the Academy to draw upon the entire American scientific and technical community in the pursuit of its mandate to provide independent advice to the nation on critical scientific and technical questions.

The Smithsonian Institution was created by act of Congress in 1846 in accordance with the will of the Englishman, James Smithson, who in 1826 bequeathed his property to the United States of America, “to found at Washington, under the name of the Smithsonian Institution, an establishment for the increase and diffusion of knowledge among men.” The Smithsonian has since evolved into an institution devoted to public education, research and national service in the arts, sciences and history. This independent federal establishment is the world’s largest museum complex and is responsible for public and scholarly activities, exhibitions and research projects nationwide and overseas.

The National Forum on BioDiversity was developed by the Board on Basic Biology of the National Research Council’s Commission on Life Sciences and by the Smithsonian Institution’s Directorate of International Activities.

The views expressed in this book are solely those of the individual authors and are not necessarily the views of the National Academy of Sciences or of the Smithsonian Institution.

“Papers from the National Forum on BioDiversity held September 21–25, 1986, in Washington, D.C., under the cosponsorship of the National Academy of Sciences and the Smithsonian Institution.”

Copyright © 1988 by the National Academy of Sciences

No part of this book may be reproduced by any mechanical, photographic, or electronic process, or in the form of a phonographic recording, nor may it be stored in a retrieval system, transmitted, or otherwise copied for public or private use without written permission from the publisher, except for the purposes of official use by the U.S. government.

The National Forum on BioDiversity, on which this book is based, was developed by the Board on Basic Biology of the National Research Council’s Commission on Life Sciences and by the Smithsonian Institution’s Directorate of International Activities.

The diversity of life forms, so numerous that we have yet to identify most of them, is the greatest wonder of this planet. The biosphere is an intricate tapestry of interwoven life forms. Even the seemingly desolate arctic tundra is sustained by a complex interaction of many species of plants and animals, including the rich arrays of symbiotic lichens. The book before you offers an overall view of this biological diversity and carries the urgent warning that we are rapidly altering and destroying the environments that have fostered the diversity of life forms for more than a billion years.

The source of the book is the National Forum on BioDiversity, held in Washington, D.C., on September 21–24, 1986, under the auspices of the National Academy of Sciences and Smithsonian Institution. The forum was notable for its large size and immediately perceived impact on the public. It featured more than 60 leading biologists, economists, agricultural experts, philosophers, representatives of assistance and lending agencies, and other professionals. The lectures and panels were regularly attended by hundreds of people, many of whom participated in the discussions, and various aspects of the forum were reported widely in the press. On the final evening, a panel of six of the participants conducted a teleconference downlinked to an estimated audience of 5,000 to 10,000 at over 100 sites, most of them hosted by Sigma Xi chapters at universities and colleges in the United States and Canada.

The forum coincided with a noticeable rise in interest, among scientists and portions of the public, in matters related to biodiversity and the problems of international conservation. I believe that this increased attention, which was evident by 1980 and had steadily picked up momentum by the time of the forum, can be ascribed to two more or less independent developments. The first was the accumulation of enough data on deforestation, species extinction, and tropical biology to bring global problems into sharper focus and warrant broader public exposure. It is no coincidence that 1986 was also the year that the Society for Conservation Biology was founded. The second development was the growing awareness of the close linkage between the conservation of biodiversity and economic development. In the United States and other industrial countries, the two

are often seen in opposition, with environmentalists and developers struggling for compromise in a zero-sum game. But in the developing nations, the opposite is true. Destruction of the natural environment is usually accompanied by short-term profits and then rapid local economic decline. In addition, the immense richness of tropical biodiversity is a largely untapped reservoir of new foods, pharmaceuticals, fibers, petroleum substitutes, and other products.

Because of this set of historical circumstances, this book, which contains papers from the forum, should prove widely useful. It provides an updating of many of the principal issues in conservation biology and resource management. It also documents a new alliance between scientific, governmental, and commercial forces—one that can be expected to reshape the international conservation movement for decades to come.

The National Forum on BioDiversity and thence this volume were made possible by the cooperative efforts of many people. The forum was conceived by Walter G.Rosen, Senior Program Officer in the Board on Basic Biology—a unit of the Commission on Life Sciences, National Research Council/National Academy of Sciences (NRC/NAS). Dr. Rosen represented the NRC/NAS throughout the planning stages of the project. Furthermore, he introduced the term biodiversity, which aptly represents, as well as any term can, the vast array of topics and perspectives covered during the Washington forum. Edward W.Bastian, Smithsonian Institution, mobilized and orchestrated the diverse resources of the Smithsonian in the effort. Drs. Rosen and Bastian were codirectors of the forum. Michael H.Robinson (Director of the National Zoological Park) served as chairman of the Program Committee, organized one of the forum panels, and served as general master of ceremonies. The remainder of the Program Committee consisted of William Jordan III, Thomas E.Lovejoy III, Harold A.Mooney, Stanwyn Shetler, and Michael E.Soulé.

The various panels of the forum were organized and chaired by F.William Burley, William Conway, Paul R.Ehrlich, Michael Hanemann, William Jordan III, Thomas E.Lovejoy III, Harold A.Mooney, James D.Nations, Peter H.Raven, Michael H.Robinson, Ira Rubinoff, and Michael E.Soulé. David Johnson at the New York Botanical Garden was very helpful in verifying some of the botanical terms used in this book. Helen Taylor and Kathy Marshall of the NRC staff and Anne Peret of the Smithsonian Institution assisted with the wide variety of arrangements necessary to the successful conduct of the forum. Linda Miller Poore, also of the NRC staff, entered this entire document on a word processer and was responsible for formatting and checking the many references. Richard E.Morris of the National Academy Press guided this book through production.

The National Forum on BioDiversity was supported by the National Research Council Fund and the Smithsonian Institution, with supplemental support from the Town Creek Foundation, the Armand G.Erpf Fund, and the World Wildlife Fund. The National Research Council Fund is a pool of private, discretionary, nonfederal funds that is used to support a program of Academy-initiated studies of national issues in which science and technology figure significantly. The NRC Fund consists of contributions from a consortium of private foundations including

Finally, and far from least, Frances M.Peter marshalled the diverse contributions in the present volume and was essential to every step of the manuscript editing process. The cover for Biodiversity was derived from a forum poster designed by artist Robert Goldstrom.

Next: The Current State of Biological Diversity »
Biodiversity Get This Book
× 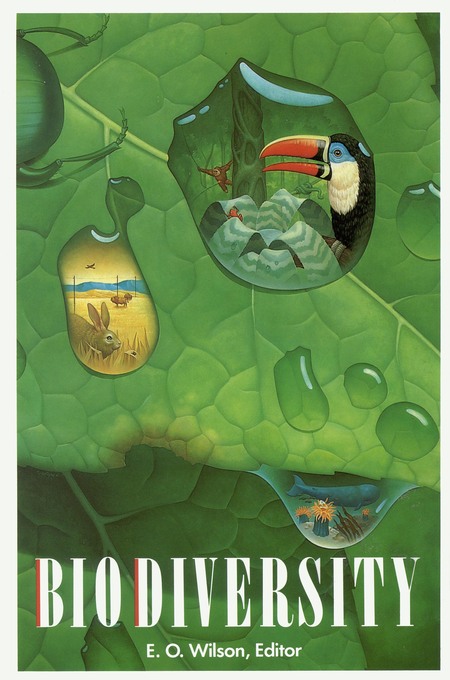 This important book for scientists and nonscientists alike calls attention to a most urgent global problem: the rapidly accelerating loss of plant and animal species to increasing human population pressure and the demands of economic development. Based on a major conference sponsored by the National Academy of Sciences and the Smithsonian Institution, Biodiversity creates a systematic framework for analyzing the problem and searching for possible solutions.