Letter Report: Scientific Assessment of Options for the Disposition of the Galileo Spacecraft (2000)

Get This Book
Visit NAP.edu/10766 to get more information about this book, to buy it in print, or to download it as a free PDF.
Page 1 Share Cite
Suggested Citation:"Letter to Dr. Rummel." National Research Council. 2000. Letter Report: Scientific Assessment of Options for the Disposition of the Galileo Spacecraft. Washington, DC: The National Academies Press. doi: 10.17226/9896.
×

In your letter of April 13, 2000, you reiterated a verbal request made in March for advice from the Space Studies Board’s (SSB’s) Committee on Planetary and Lunar Exploration (COMPLEX) on planetary protection concerns and other issues related to the final disposition of the Galileo spacecraft now in orbit about Jupiter. In particular, you asked that COMPLEX “evaluate the Galileo Project’s favored alternatives for the spacecraft’s planned trajectory during the remainder of the mission” and provide “a short statement of [COMPLEX’s] findings, conclusions and recommendations relative to that plan.” In addition, you indicated that it would be particularly useful if COMPLEX could address four subsidiary issues in terms of their implications for planetary protection. These issues concerned:

Work on this assessment began at COMPLEX’s March 29-31, 2000, meeting at the Arnold and Mable Beckman Center in Irvine, California. Torrence Johnson (Jet Propulsion Laboratory), the Galileo Project Scientist, briefed the committee on the various options under consideration for the final disposal of the spacecraft and outlined the opportunities and risks associated with the last phase of Galileo’s operational life.

In its deliberations, COMPLEX considered three separate issues: planetary-protection considerations affecting the disposal of Galileo in the Jupiter system; the unique scientific opportunities presented by the various end-of-mission scenarios being considered by the Galileo Project and their relative priorities; and general considerations arising from possible conflicts between planetary-protection requirements and scientific opportunities. Full details are contained in the attached assessment.

With respect to planetary-protection issues, COMPLEX reached the following conclusions:

COMPLEX understands that operational considerations point to collision with Jupiter as NASA’s preferred means for disposing of Galileo. COMPLEX concurs with this decision.

With respect to scientific priorities they afford, COMPLEX believes that the most important of the various options being considered by the Galileo Project are a conservative trajectory leading to a close flyby of the small moon Almathea, and a series of less conservative trajectories leading to one or more polar flybys of Io, and, possibly a flyby of Almathea as well.2 Given this choice, COMPLEX believes that the Io flybys have the greatest potential for providing important scientific results because they directly address the processes responsible for the active generation of planetary magnetic fields, a key question outlined in COMPLEX ’s Integrated Strategy.3

With respect to issues arising from possible conflicts between planetary-protection requirements and scientific opportunities, COMPLEX recognizes that its preference for an Io flyby requires the selection of one of the less conservative trajectory options. That is, choosing the Io encounters postpones for approximately 1 year Galileo’s placement on a ballistic trajectory into Jupiter and, thus, increases the chance that the spacecraft may suffer a fatal failure and end up on an unintended trajectory.

Given this lack of information, COMPLEX recommends that the Galileo Project perform the necessary calculations to determine the probability of Galileo impacting Europa should control of the spacecraft be lost after the G29 flyby. These results can then be used to estimate the probability of contaminating the putative europan ocean with terrestrial microorganisms by following the procedure outlined in the report of the Task Group on the Forward Contamination of Europa.4 Only if such a quantitative analysis is undertaken can COMPLEX give an unequivocal recommendation about the

degree to which the proposed trajectory options are consistent with the requirements necessary to avoid the forward contamination of Europa.

In the interim, COMPLEX performed its own qualitative analysis. Based on the information supplied to the committee, an extra year of operations can be expected to increase the burden of radiation absorbed by Galileo by only about 20%. This estimate, plus the fact that Galileo retains full redundancy in all essential systems and that the radiation effects sustained thus far have not handicapped control of the spacecraft, suggests to COMPLEX that the probability of total loss of control during this extra year is relatively small. Moreover, the chances of total failure can be mitigated by prudent monitoring of the spacecraft ’s health and by a commitment on the part of NASA to retarget Galileo onto a Jupiter-bound trajectory following the loss of redundancy in any major command and control subsystem.

In summary, COMPLEX concurs with NASA’s decision that impact with Jupiter is the most appropriate means of disposing of Galileo. COMPLEX recommends that the Galileo Project perform qualitative risk assessment of the various trajectory options. Pending the completion of these calculations, the committee reached a consensus that an appropriate interim course of action is to defer the destruction of Galileo until after the completion of the Io polar flybys, in order to obtain as much science as possible from the mission. 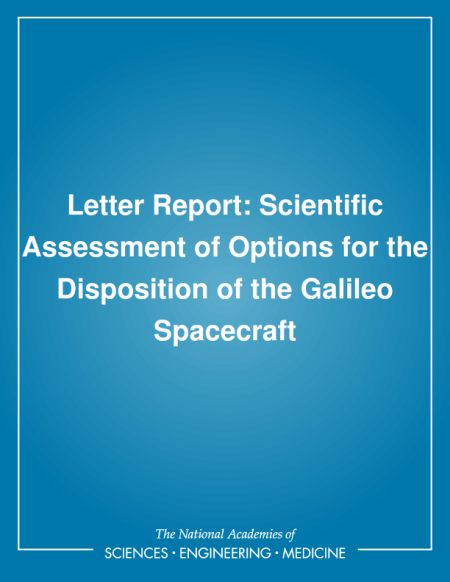