China Bound: A Guide to Academic Life and Work in the PRC (1987)

Visit NAP.edu/10766 to get more information about this book, to buy it in print, or to download it as a free PDF.
Page i Share Cite
Suggested Citation:"Front Matter." National Research Council. 1987. China Bound: A Guide to Academic Life and Work in the PRC. Washington, DC: The National Academies Press. doi: 10.17226/990.
×

NATIONAL ACADEMY PRESS 2101 Constitution Avenue, NW Washington, DC 20418 NOTICE: The project that is the subject of this publication was sponsored by the Committee on Scholarly Communication with the People's Republic of China. It is a completely revised edition of China Bound: A Handbook for American Students, Researchers and Teachers, pub- lished in 1981. The Committee on Scholarly Communication with the People's Republic of China (CSCPRC) is jointly sponsored by the American Council of Learned Societies, the Social Science Re- search Council, and the National Academy of Sciences. The Academy provides an admin- istrative base for the CSCPRC Since the normalization of diplomatic relations between the United States and China in 1979, the CSCPRC has developed programs with the Chinese Academy of Sciences (CAS), the Chinese Academy of Social Sciences (CASS), and the State Education Commission, in addition to those with the China Association for Science and Technology (CAST), with whom CSCPRC began exchanges in 1972. Current activities include a program for American grad- uate students and postdoctoral scholars to carry out long-term study or research in affili- ation with Chinese universities and research institutes; a short-term reciprocal exchange of senior-level Chinese and American scholars; a bilateral conference program; and an exchange of joint working groups in selected fields. This publication was supported in part by the CSCPRC Information Services Center, which is funded by the U.S. Information Agency and the National Science Foundation. The accuracy of the information presented and the views expressed in this publication are the responsibility of the authors and not the sponsoring organizations. Library of Congress Cataloging-in-Publication Data Gottschang, Karen Turner. China bound. Bibliography: p. Includes index. 1. Foreign studyChina. 2. American studentsChina. 3. Teachers, Foreign China. 4. ChinaDescription and travel1976- . I. Reed, Linda A. II. Title. LB2376.3.C6G68 1987 370.19'6 87-1 1251 ISBN 0-309-03731-X Copyright @)1987 by the National Academy of Sciences No part of this book may be reproduced by any mechanical, photographic, or electronic process, or in the form of a phonographic recording, nor may it be stored in a retrieval system, transmitted or otherwise copied for public or private use, without written permis- sion from the publisher, except for the purposes of official use by the United States gov- ernment. Printed in the United States of America The calligraphy appearing on the cover and in the text was kindly pre- pared by Fu Shen, Curator of Chinese Art, Freer Gallery of Art of the Smithsonian Institution, Washington, D.C.

Foreword For most students and scholars in the China field, reasons to go to the People's Republic for study or research are obvious. Living in the cul- ture and society they have studied in college and graduate school is the logical next step down a professional path that will be enhanced by and increasingly dependent on firsthand knowledge of contemporary China and what it has to offer in the way of library, archival, and human resources. For many people in China studies, the opening of the PRC eight years ago to foreign students, researchers, and teachers inaugu- rated a new chapter in their professional and personal lives by provid- ing the opportunity to reevaluate and perhaps reframe the intellectual suppositions and premises of their work. Indeed, the students and schol- ars who have conducted research in China since 1979 are producing fresh, compelling approaches to China studies, and their voices are heard not just in academia, but in political and commercial sectors as well. China attracts because it was closed to foreign observers for so long; the very process of its opening up is an important subject for study. In addition, the experimental, constantly changing nature of Chinese po- litical, social, and economic reforms is an endless source of fascination and instruction. But living and working in a land such as China, with customs and traditions so different from what we in the United States are accus- tomed to, can present innumerable difficulties as well as challenge and reward. Indeed, lack of familiarity with the minutiae of daily life may greatly affect the success of a visitor's study, research, or teaching experience. Today, American students, scholars, and teachers, with eight years of experience on which to draw, are going to China much better ·. V11

viii FOREWORD prepared than their predecessors, and their stays in the PRC are far more fruitful because of this. China Bound: A Guide to Academic Life and Work in the PRC presents the latest information from academics recently returned from China about living and working in that country as a foreign student or scholar. What this book seeks to provide is information for those contemplating or already planning a trip to China information that everyone who contributed to this project wishes they had known before their visit. As a person outside the realm of China studies who has only recently begun to discover the richness of that country as a site for my own research, I can personally attest to the usefulness of this handbook, and I offer it in the hope that it will enhance the China experience of all those who read it. HERBERT SIMON, Chairman Committee on Scholarly Communication with the People's Republic of China

Preface The numbers of travelers now bound for China, planning to go there in the future, or even hoping to make the trip some day have reached proportions never envisioned when the first edition of this book ap- peared in 1981. That handbookwhich was produced and distributed by the U.S.-China Education Clearinghouse' a joint project of the Com- mittee on Scholarly Communication with the People's Republic of China and the National Association for Foreign Student Affairs proved to be of great service to American academics traveling to China during the early years following normalization in 1979 and since. Today, how- ever, so many changes are taking place in China, so many conditions are being altered in one way or another, that there is a pressing need for new and updated information. This revised edition responds to that need. China Bound presents both general information applicable to all Americans planning to reside in China and specific information that should be particularly useful to students, research scholars, and teach- ers. It is recommended that readers carefully review both categories of material to gain a more complete understanding of the Chinese aca- demic milieu, which is quite interwoven with and offers deep insights into day-to-day life and practices of the country and culture. For this reason, the information offered here is as helpful to those who are trying to decide whether to spend an extended period in the PRC as it is to those who already have been accepted into programs. The information for this edition of China Bound was collected from a wide array of sources: from experiences of students and scholars who went to China on summer and year-long exchange programs arranged through both formal and informal agreements among U.S. and Chinese 1X

x PREFACE educational institutions and national organizations; from reports of teachers sent to China by the U.S. Information Agency under the Ful- bright Program; and from Americans who have taught in China under private arrangements with Chinese universities. For all those who hope to be bound for China but have not yet com- pleted their plans, opportunities for study and for research and teaching positions in China are listed in the first chapter of this volume. Although limited facilities make it difficult to accommodate all who wish to study or work in the PRC, there are numerous and growing opportunities for American students, researchers, and teachers to go to China. A number of U.S. institutions have concluded formal exchange agreements with universities and research institutes in China, and many others have established informal ties. To visit China, whether or not one is enrolled in a formal program, is to discover or rediscover the best of being a student. For no matter what preparation or plans one takes to China, there remains so much that is new to see and to learn at all levels that even the most experi- enced visitor is a student. The authors and the Committee on Scholarly Communication with the People's Republic of China wish you Yi lu shun feng a smooth Journey. KAREN TURNER-GOTTSCHANG LINDA A. REED January 1987

xiv CONTENTS B. Regulations Concerning the Admission of Foreign Students in Chinese Schools (1986) / 146 Regulations Governing Grants to Foreign Scholarship Students and Fees for Self-Financing Foreign Students (February 1, 1985) / 168 D. Regulations Concerning Applications by Foreign Research Scholars to Engage in Scientific Research in Institutions of Higher Education in China (September 1985) / 171 E. Information on the Recruitment of Foreign Experts (1985) / 174 F. Japanese Encephalitis Vaccine Investigators in the United States / 183 G. Approximate Costs of Hotel Rooms and Food' Internal Travel, Services, and Clothing / 190 H. Selected Information on Postal and Customs Regulations of the People's Republic of China / 196 I. Sample Contract for Teachers (July 1985) / 198 J. Protocol Between the Government of the United States of America and the Government of the People's Republic of China for Cooperation in Educational Exchanges / 204 Locations of U.S. Educational Reference Collections in China and Their General Reference Contents / 208 L. Selected Reading List / 211 Index / 215

Next: 1. Opportunities for Research, Study, and Teaching in China »
China Bound: A Guide to Academic Life and Work in the PRC Get This Book
× 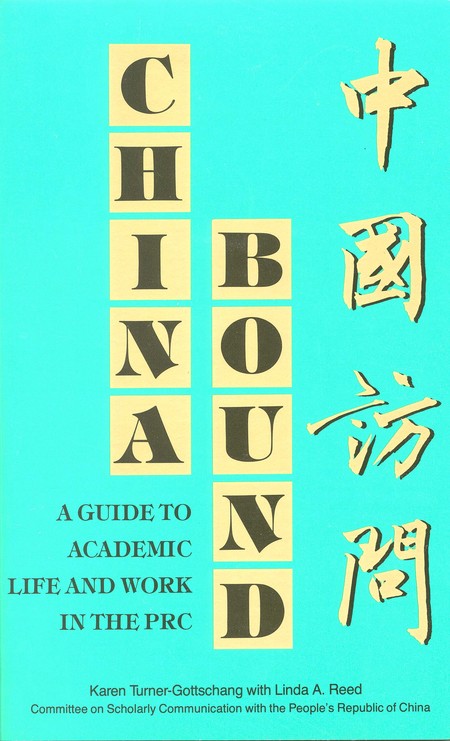 This comprehensive, highly readable handbook simplifies the sometimes complex aspects of day-to-day life in China. Based on the experience of Americans who have recently studied, done research, and taught there, China Bound gives the invaluable "inside" information that only those who have been there can provide. Written primarily for students, scholars, and teachers, the book describes Chinese academic life and work and how Americans can fit into it. And, because it covers such a broad spectrum of topics--from customs regulations, taxation, and medical care to hotel life and how to get laundry done--China Bound is also must reading for anyone who is already planning or just trying to decide whether to plan an extended visit to China. Academic Library Book Review states, "China Bound is one of those books that is absolutely essential."