Visit NAP.edu/10766 to get more information about this book, to buy it in print, or to download it as a free PDF.
Page i Share Cite
Suggested Citation:"Front Matter." National Research Council. 1991. Symposium on Tactical Oceanography: Naval Postgraduate School, Monterey, California, 12-15 March 1990. Washington, DC: The National Academies Press. doi: 10.17226/9945.
×

FOREWORD At the request of Admiral Richard F. Pitenger, the Oceanographer of the Navy, a Symposium on Tactical Oceanography was held in March 1990 at the Naval Postgraduate School in Monterey, California. The symposium was organized by the Navy Pane! of the Ocean Studies Board and supported by the Office of the Oceanographer of the Navy and the Office of Naval Research. Its purposes were: 1) to familiarize the academic oceanographic community with Navy activities and operational requirements and 2) to convey the latest scientific findings from academic scientists to Navy scientists and operational personnel. The symposium concentrated on the use of acoustics in antisubmarine warfare (ASW). ASW has been the Navy's highest operational priority for the last five years, because of increasing concern about the significant acoustic quieting of new Soviet submarines. Approximately ~ 25 individuals participatecd, half from the academic community and half from the military community. The symposium was held at the secret level. This was the first such symposium in twenty-five years. This report serves as an unclassified summary and record of the symposium that was requested by the Oceanographer of the Navy. It can be provided to interested individuals without restrictions. The symposium was preceded by a tactical oceanography simulation to acquaint the academic participants with Navy needs and capabilities. In the subsequent symposium, Navy and academic presenters discussed topics including operational uses, data bases, acoustic models, ocean prediction, and remote sensing. For each of these topics discussed, the current state of knowledge and requirements for Navy operations were discussed. The organizers view this symposium as the first in a series of symposia designed to promote Navy-academic cooperation and information exchange. This report is limited to discussions that occurred at the symposium and is not an exhaustive review of each subject. In particular, coastal tactical oceanography was not discussed in great detail at the symposium, but was the subject of a symposium held in 1991, which will be summarized in an upcoming report. Vl 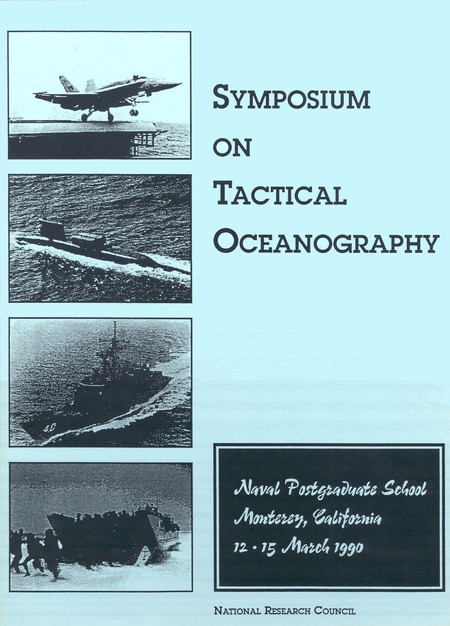