Get This Book
Visit NAP.edu/10766 to get more information about this book, to buy it in print, or to download it as a free PDF.
« Previous: Table of Contents
Page 1 Share Cite
Suggested Citation:"Executive Summary." National Research Council. 1992. Symposium on Naval Warfare and Coastal Oceanography: Naval Amphibious Base, Little Creek, Virginia, April 29-May 2, 1991. Washington, DC: The National Academies Press. doi: 10.17226/9946.
×

An annual symposium series was initiated by the Ocean Studies Board in 1990, with support from the Office of the Oceanographer of the Navy and the Office of Naval Research. The goal of this series was to bring academic scientists and Navy personnel together in a forum that would encourage open and informal discussion about Navy needs and scientific capabilities. The symposium summarized here was the second in the series, focusing on coastal warfare issues. It was held in Little Creek, Virginia, April 29 to May 2, 1991.

Naval technology has improved in important ways in recent years, with development of new submarine propulsion systems, submarine-launched air-to-surface cruise missiles, and wake-homing torpedoes. Technology continues to be the Navy's “force multiplier,” increasing the effectiveness of a small, experienced force of military personnel. It was concluded that the Navy must preserve a scientific capability that can adapt to reductions in manpower and platforms.

Symposium participants suggested improvements on existing techniques and systems; some revolutionary concepts were also proposed. One general conclusion was that acoustic and nonacoustic support for shallow water warfare can be beneficially integrated. Research should concentrate on developing the capability to predict when environmental conditions would be favorable to either approach, rather than merely reacting to the in situ environment. Another conclusion recommended that the Navy to publish its coastal information requirements more regularly and formally to guide academic education and research efforts.

A wealth of oceanographic data are available from other nation's territorial waters, collected by academic scientists, that could help complete the Navy's coastal databases. A number of research and development ideas arose, in the areas of observational capability, data collection, understanding the “science” of the problem, and subsequent development and verification of results.

Considerable research is still needed to improve the Navy's performance in shallow water operations. A key requirement will be data bases that ease access to basic research results on the processes that govern coastal meteorology and nearshore oceanography.

Next: Introduction »
Symposium on Naval Warfare and Coastal Oceanography: Naval Amphibious Base, Little Creek, Virginia, April 29-May 2, 1991 Get This Book
× 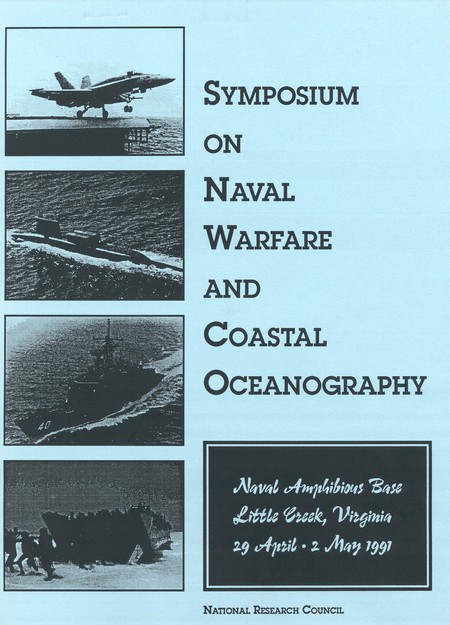