Chapter:Appendix C: Methods of Identifying and Collecting the Literature

Get This Book
Visit NAP.edu/10766 to get more information about this book, to buy it in print, or to download it as a free PDF.
« Previous: Appendix B: Public Meeting Agendas
Page 339 Share Cite
Suggested Citation:"Appendix C: Methods of Identifying and Collecting the Literature." Institute of Medicine. 2000. Gulf War and Health: Volume 1: Depleted Uranium, Sarin, Pyridostigmine Bromide, and Vaccines. Washington, DC: The National Academies Press. doi: 10.17226/9953.
×

C
Methods of Identifying and Collecting the Literature

The primary task of this study was a review of the scientific and medical literature published from the 1940s to the present on the health effects of depleted uranium (DU), pyridostigmine bromide (PB), sarin, and the anthrax and botulinum toxoid vaccines. Early in the course of this study, methods to identify, collect, and disseminate the literature were discussed and decided upon.

ONLINE DATABASES AND OTHER SOURCES

The committee focused on a comprehensive search of relevant online databases to begin its literature review. Twenty-two online databases containing citations to literature covering biomedical, toxicological, chemical, and historical information were searched in March 1999 utilizing Dialog, a commercial database vendor. These bibliographic online databases (Table C.1) offer the most effective means of identifying international scientific literature and, in general, cover the time span from 1960 to the present. Although there is subject and content overlap, each database serves a unique function, has a distinct subject emphasis, and indexes literature not available elsewhere. Searches were customized to reflect the structure of each database. To be as comprehensive as possible, the searches were structured to retrieve all types of literature (e.g., epidemiologic studies, case reports, letters).

To maximize retrieval, the search strategy incorporated synonymous terms and, where appropriate, the Chemical Abstracts Service (CAS) Registry Number, which uniquely identifies individual chemicals. Terms were truncated in order to include their plural forms or alternate spellings. The searches also in-

An additional search retrieved citations on studies of uranium miners and other occupations. The results from the two searches were combined and dupli-

cates were removed, yielding a total of 4,044 citations. The committee also searched for literature on illnesses in Gulf War veterans and related concerns. In August 1999, the same search strategies were used to identify any citations on newly published literature pertaining to the committee’s review. This update retrieved 274 citations, which were added to the committee’s databases.

Since online databases were developed in the mid-1960s, few offer retrospective coverage. To identify pre-1960s literature, the committee staff examined volumes of Index Medicus. Additionally, staff and committee members examined reference lists of major review articles and books for relevant citations; extensive reference lists were provided by several sources including the ATSDR Toxicological Profile on Uranium and recent reports by RAND. The study also accessed the TOXNET factual databases available through the National Library of Medicine and the Cochrane Collaboration database. In addition to the above sources, input was received from veterans, interested persons, committee members, and speakers at committee meetings. The committee also examined more recently published studies that it identified.

All retrieved citations were entered into bibliographic databases, which at the end of the study contained 6,249 references to abstracts, journal articles, books, military and civilian reports, dissertations, and conference proceedings relating to the agents and to the Gulf War. Staff and committee members reviewed the citations and abstracts for relevance to the committee’s task. Acquiring the full text of the published literature involved accessing the collections of the National Library of Medicine (NLM), the National Institutes of Health Library, the Himmelfarb Health Sciences Library of the George Washington University, and the National Research Council (NRC) Library, as well as use of the NRC’s interlibrary loan service. Documents were also ordered from the National Technical Information Service and other sources. The committee’s work greatly benefited from access to the NLM’s Docline document delivery service. Citations and abstracts from foreign language journals were reviewed, and a number of the most relevant foreign language articles were translated into English.

The committee divided itself into four working groups (PB, DU, vaccines, sarin–cyclosarin) that were responsible for identifying, reviewing, and analyzing the relevant literature. The work of each of the working groups was also reviewed by committee members from other working groups, and was presented and discussed thoroughly by the entire committee at each stage of the writing and analysis. 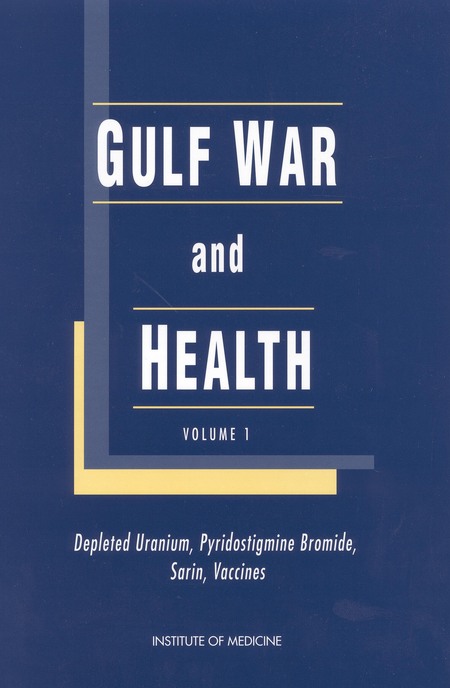 The men and women who served in the Gulf War theater were potentially exposed to a wide range of biological and chemical agents. Gulf War and Health: Volume 1 assesses the scientific literature concerning the association between these agents and the adverse health effects currently experienced by a large number of veterans.