Chapter:Appendix F: Defense Nuclear Facilities Safety Board Recommendation 96-1 to the Secretary Of Energy

Get This Book
Visit NAP.edu/10766 to get more information about this book, to buy it in print, or to download it as a free PDF.
« Previous: Appendix E: Long-Term Safety of the Direct Grout Option
Page 138 Share Cite
Suggested Citation:"Appendix F: Defense Nuclear Facilities Safety Board Recommendation 96-1 to the Secretary Of Energy." National Research Council. 2000. Alternatives for High-Level Waste Salt Processing at the Savannah River Site. Washington, DC: The National Academies Press. doi: 10.17226/9959.
×

Atomic Energy Act of 1954, as amended

The Defense Nuclear Facilities Safety Board (Board) has devoted substantial attention to the planned use of the In-Tank Precipitation (ITP) System at the Savannah River Site, because of its importance to removal of high-level radioactive waste from storage tanks at that Site, and because certain unique hazards are associated with the ITP process.

The hazards are a consequence of the volatile and flammable organic compound benzene that is released during the process in amounts that must not exceed safe limits. The benzene is generated through decomposition of tetraphenylborate (TPB) compounds. These compounds are added in the process with the objective to precipitate and remove radioactive cesium from solution in the waste water destined for the saltstone process. The concentrated slurry containing the precipitated cesium constitutes a much smaller volume than the original waste, and its feed to the vitrification process leads to production of a correspondingly smaller amount of glass ultimately to be disposed of in a repository.

The proposed treatment process calls for addition of a quantity of TPB in excess of that theoretically required to precipitate the cesium as cesium TPB. That excess is required partly because the significant amount of potassium present is also precipitated as potassium TPB, and partly because an excess of TPB in solution ensures more effective scrubbing of the radioactive cesium through precipitation. However, the benefit of effective scrubbing is accompanied by the generation of the benzene, which presents hazards of a different sort, and which also requires safety controls.

Westinghouse Savannah River Company is the Department of Energy contractor in charge of ITP. The Westinghouse staff at the Savannah River Site believed until recently that the principal cause of decomposition of TPB and generation of benzene is exposure of the TPB to the high level of radiation in the waste. That belief was based on results of full-scale tests conducted in 1983 that may have been misinterpreted, and on a decade of subsequent bench-scale tests using non-radioactive simulants (almost exclusively) rather than actual waste. The first large-scale operations with actual waste since 1983 were conducted recently in Tank 48, and they showed that the generation and release of benzene did not follow predictions. The generation of benzene in the waste under treatment in Tank 48 was unexpectedly rapid. A surprisingly large amount of the benzene remained captured in the waste, and that benzene was released through action of mixing pumps in the tank.

The current view of the contractor staff is that benzene is produced principally through catalytic decomposition of TPB ions in solution. They believe the catalysts are potentially both soluble and insoluble species, one of which is soluble copper known to be present in the waste. They also believe that the cesium TPB precipitate and the potassium TPB precipitate are relatively immune to catalytic decomposition. The contractor proposes to conduct two Process Verification Tests (PVT), PVT-1 and PVT-2, to further establish the validity of these views and to demonstrate the accuracy of the model it has developed to predict the rate at which the captured benzene is released from solution. PVT-1 would be performed on the homogenized nuclear waste now in Tank 48, which has already been treated with TPB that subsequently has partly decomposed with the result that some cesium has returned to solution. Additional TPB would be added to this material to reprecipitate the cesium. The amount of TPB to be added would be strictly limited to a small amount as needed to reduce the concentration of cesium remaining in solution to a low radiation level acceptable for processing as low level waste in the saltstone process, and a large part of that solution would be sent to saltstone. The subsequent proposed experiment, PVT-2, will involve adding to the slurry remaining in Tank 48 a large amount of additional untreated waste and a substantial quantity of TPB as needed to precipitate the cesium in this new waste.

The Board has been informed that the primary safety precaution for the proposed cesium removal activities is to maintain an inert atmosphere in the headspace of Tank 48. This is to be done through establishing a sufficient flow of nitrogen to the tank. Two nitrogen feed systems are available, a normal system and a supplemental emergency system. The nitrogen systems are present to keep the concentration of oxygen below the level that would support combustion of the benzene. Westinghouse staff members have pointed out that these redundant inerting systems provide a sufficient safety factor for control of oxygen concentration in the headspace. They have further stated that the rate of buildup of oxygen concentration from air ingress into the tank headspace, if both inerting systems are simultaneously inoper-

able, would be slow enough to allow reestablishment of nitrogen flow before the bulk vapor in Tank 48 reaches the minimum oxygen concentration that could support combustion of benzene.

Operations since December 1995 indicate that for the current batch of waste, mixing pump operation increases the benzene release rate from the waste and that turning off the pumps essentially stops the release. The Board has been informed of the consequent belief that the actual rate of benzene release into the tank's headspace and its subsequent removal can be controlled through managing the action of the mixing pumps. This stratagem is to be followed in the tests as a means of maintaining the concentration of benzene in the headspace at a low enough level to prevent it from becoming flammable even if the oxygen concentration were to increase to an undesired level.

Westinghouse representatives also plan to impose a temperature limit for PVT-1 which is expected to prevent decomposition of TPB or to reduce its rate. Finally, they state that for PVT- 1 the addition of TPB will be limited to 200 gallons of fresh 0.5 Molar sodium TPB solution, and that any subsequent additions during this experiment would be subject to review and approval by the Department of Energy. Westinghouse believes that this, in turn, would limit the maximum amount of additional benzene that could be produced. In effect, the amount of TPB added will be treated as an Operating Limit.

The Department and its contractor have brought substantial expertise to bear on understanding the science of the ITP process and the phenomena attending it. However, the Board is concerned that some important questions remain unanswered. First, the physical basis for holdup of large amounts of benzene in the waste and its removal through mixing pump operation is not yet well understood. Therefore, confidence in the ability to control its release is not as high as desired.

The Board is also concerned with the results of a recent laboratory-scale experiment using Tank 48 solution and TPB additive. The results from this experiment indicate that the amount of TPB which decomposed exceeded that amount which had been added during the experiment, suggesting that the cesium and potassium TPB precipitates had also partially decomposed, presumably through catalytic attack. If the cesium and potassium TPB precipitates were subject to rapid and extensive attack by a catalyst, an enormous amount of benzene could be generated, and the rate of release could be rapid enough to overwhelm the removal capability of the purging system for Tank 48.

The Board concurs with the view that ITP is of high value for subsequent vitrification of the nuclear waste in the tanks at the Savannah River Site, and that further testing is necessary to gain a better understanding of the science of the process to assure safety during and after precipitation of the cesium.

The Board believes that if it were conducted according to the limitations stated above, PVT-1 can be run safely and can help in leading to an improved understanding of the science and the mechanisms involved in the ITP process.

The present plan for conduct of PVT-2 involves new and untested nuclear waste and a much larger addition of TPB. Furthermore, the liquid in Tank 49, which contains TPB from the previously mentioned 1983 demonstration test, is to be used as the source of a significant part of the TPB to be added to Tank 48 during PVT-2. The Board understands that Tank 49 was also the source of TPB used in the one experiment which led to an apparent decomposition of precipitated cesium and potassium TPB. One very probable interpretation of that anomaly is that the material in Tank 49 contains an unknown catalyst which can attack the precipitated material and might also increase the rate of release of benzene by an amount that is unpredictable at present. Furthermore, waste from tanks not yet tested could contain unknown constituents that could also adversely affect the rate of production and release of benzene.

Therefore, the Board makes the following recommendations:

Next: Appendix G: Acronyms and Abbreviations »
Alternatives for High-Level Waste Salt Processing at the Savannah River Site Get This Book
× 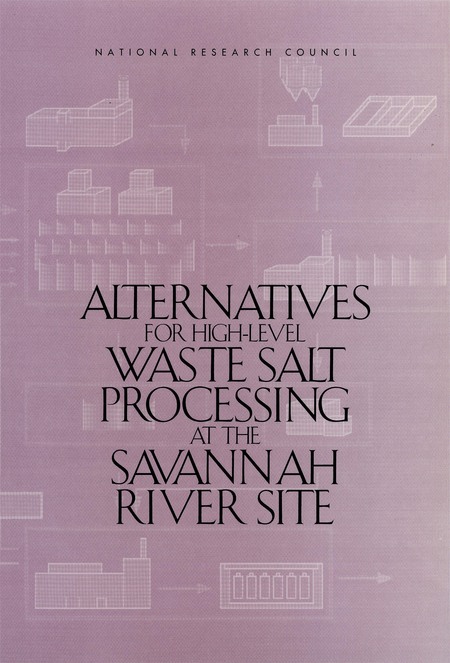 There are several sites in the United States where high-level radioactive waste (HLW) are stored; including the Savannah River Site (SRS), established in 1950 to produce plutonium and tritium isotopes for defense purposes. In order to further immobilize the radioactive waste at this site an in-tank precipitation (ITP) process is utilized. Through this method, the sludge portion of the tank wastes is being removed and immobilized in borosilicate glass for eventual disposal in a geological repository. As a result, a highly alkaline salt, present in both liquid and solid forms, is produced. The salt contains cesium, strontium, actinides such as plutonium and neptunium, and other radionuclides. But is this the best method?

The National Research Council (NRC) has empanelled a committee, at the request of the U.S. Department of Energy (DOE), to provide an independent technical review of alternatives to the discontinued in-tank precipitation (ITP) process for treating the HLW stored in tanks at the SRS. Alternatives for High-Level Waste Salt Processing at the Savannah RIver Site summarizes the finding of the committee which sought to answer 4 questions including: "Was an appropriately comprehensive set of cesium partitioning alternatives identified and are there other alternatives that should be explored?" and "Are there significant barriers to the implementation of any of the preferred alternatives, taking into account their state of development and their ability to be integrated into the existing SRS HLW system?"