Accidental Death and Disability: The Neglected Disease of Modern Society (1966)

Visit NAP.edu/10766 to get more information about this book, to buy it in print, or to download it as a free PDF.
« Previous: The Magnitude of the Problem
Page 10 Share Cite
Suggested Citation:"Accident Prevention." National Academy of Sciences and National Research Council. 1966. Accidental Death and Disability: The Neglected Disease of Modern Society. Washington, DC: The National Academies Press. doi: 10.17226/9978.
×

ACCIDENT PREVENTION The long-term solution to the injury problem is prevention. The major responsibility for accident prevention rests not with the medical profession, but with educators, industrialists, engineers, public health officials, regulatory officials, and private citizens. Although the physician is concerned primarily with increasing survival and lessening disability of victims after accidents occur, there are many ways in which the medical profession can help to prevent accidents. These include the detection and reporting of health hazards introduced into the environment; calling attention to the relationship of design of vehicles, appliances, houses, and public buildings to types of accidents; and identifying the roles of human behavioral, physical, emotional, and mental defects, acute and chronic illness, alcohol, and drugs in accident liability. One of the outstanding pieces of evidence of the value of accident prevention is in the improved safety record of employees in private industry as a result of the improved design of power machinery and the teaching of safety measures. Precise standards are followed in the construction of most buildings, equipment and appliances. Paradoxically, the hazards to the consumer in using these products of industry may go undetected or uncorrected. The introduction of a new drug receives close scrutiny and its untoward or "accidental" effects are reported until its use and limitations are well established, but there is little requirement that hazards or limitations of a new machine or an appliance be detected, reported, and corrected early in its use. There seems to be no explanation for the lack of national standards or codes with respect to motor vehicles or their equipment. Thirty states do not even require periodic automobile inspection;5 they have become dumping-grounds for vehicles that fail to pass inspection in states that do require it. Federal imposition of proved safety standards and of periodic inspection, if applied as vigorously to vehicles engaged in interstate travel as are the regulations that preclude interstate commerce of drugs unapproved by the Food and Drug Administration, could greatly reduce the nation's annual traffic toll. Prevention of accidents involves training in the home, in the schools, and at work, augmented by frequent pleas for safety in 10

the news media; first aid courses and public meetings; and inspec- tion and surveillance by regulatory agencies. Hazards involved in fabrication and utilization of vehicles, highways, appliances, farm implements, homes, and public buildings, or arising from partici- pation in sports, or from fire, natural disaster, or national emer- gencies concern practically every segment of modern society. Of the nearly 52 million nonfatal accidental injuries in 1965, only 7 per- cent were caused by motor vehicles. Accident prevention must be directed to the 43 percent which occurred in the home; the 16 per- cent in industry and the 34 percent in public places, recreation, other forms of transportation, etc.6 There is need for an advisory agency in the form of a National Council on Accident Prevention, with representation from appro- priate government agencies, industry, engineering, architecture, insurance, public health, education, the behavioral sciences, and medicine. Its major mission would be to ascertain the causes of accidental injury and to recommend or initiate measures necessary for their control or elimination. It would coordinate the findings and regulations now prescribed by industry and by the numerous federal safety laws dealing with neatly industries and administered by government departments whose primary missions are directly or indirectly related to health. It would identify needs and enlist federal and private support of research and of programs in federal departments, states and communities, and specialized research laboratories in the epidemiology and prevention of accidents. Some of these needs and many of the problems and their solutions have been identified by the Division of Accident Prevention of the U. S. Public Health Service and by the National Safety Council. The National Traffic Safety Advisory Committee, as provided for in the EIighway Safety Act of 1966, affords for the first time a means by which preventive measures and standards can be deline- ated for all transport vehicles, including not only highway vehicles but also railroad, aviation, and coast guard conveyances. More than half of the accidental deaths, disabilities, and costs are unrelated to transportation, and factors peculiar to highways, vehicles and drivers constitute but a part of the total accident prevention problem. RECOMMENDATION Formation of a National Council on Accident Prevention at the Executive level for coordination of information and advice on implementation of measures and regulations now vested in scattered private, industrial, and federal agencies, and for research, public education, and develop- ment of improved standards in accident prevention. 11

Next: Emergency First Aid and Medical Care »
Accidental Death and Disability: The Neglected Disease of Modern Society Get This Book
× 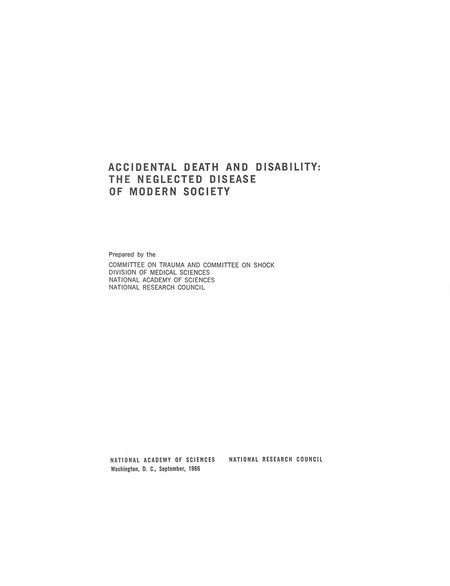