Lessons from COVID-19 for Now and the Future

The Forum on Microbial Threats of the National Academies of Sciences, Engineering, and Medicine hosted a virtual workshop, Toward a Post-Pandemic World: Lessons from COVID-19 for Now and the Future, in September 2021. The workshop examined the response to the COVID-19 pandemic in the United States and abroad and highlighted opportunities and key understanding to:

“Our global collective response was not adequate, and we need to work differently to ensure the COVID-19 pandemic is indeed the last pandemic…. None of us are safe until we can ensure that our systems reach the furthest corners of our diverse communities. ”

“If the right steps are taken fast enough … we could, in our response, build a fairer and more equitable world in the process. We are going to need urgent and sustained political leadership at the highest levels to address the social determinants of health and operationalize the health and all policies approach.”

“We need to invest in a healthier world before the next pandemic…. Fundamentally it means actually investing in a world that is resilient to unexpected, unanticipated illnesses, investing in things like loneliness and in parks and in poverty and housing.”

Preparing for the Future

During the COVID-19 pandemic, the rapidly evolving situations, emerging variants, and changing response actions and public health measures have resulted in much confusion for the public and created an overall uncertainty about what actions to take in the present and the future.

The workshop included discussions of best practices, existing research, and case studies from different parts of the world to consider when responding and mitigating impact during an outbreak.

Communities are a resource for untapped expertise and knowledge.

“We have to accept the fact that the expertise is diffused…. [We need to] focus on the community assets, community strengths … and build on the resilience in the community.”

“Engagement does not happen overnight. Engagement takes time, trust building takes time. What we have done to do that is really ongoing engagement, [and] institutionalize our participation in the community.”
Vish Viswanath, Harvard T.H. Chan School of Public Health

Lawrence Sao Babawo, School of Community Health Sciences in the Department of Nursing, Njala University, described the experience from Ebola where the initial response was heavily led by the top tiers of government but later found success when local leaders were brought in as partners to work on a solution.

According to Babawo, there was a lack of trust in the Ebola response due to several factors:

“So, because the community were not engaged, were not involved in this system, we came to realize that a lot of social mobilization messaging [was] distorted, and people would give their own interpretation about what the messages were. And therefore, it did not feel like the right decisions or the right effect that it was supposed to create.”

“One of those things that was done to [remove] distrust in the people was that there was [a] new communication strategy that involved the people themselves.”

“The lessons learned from the Ebola outbreak actually helped a lot in the COVID pandemic response in Sierra Leone…. Once the government heard that there's the pandemic, all the pillars and people were put into strategic positions, specialists, medical people were put into strategic position. So that once the pandemic arrived in Sierra Leone, we are in a better position when you compare it to the Ebola outbreak.”

CASE STUDYThe Role of Community Engagement During the Pandemic: Lessons from Paraguay

Guillermo Sequera, Ministry of Public Health and Social Welfare, Paraguay, described examples of community self-organization, the issue of equity and its different aspects, and grassroot efforts to address engagement.

“In this country, and the same applies to other Latin American countries, health policies are highly centralized. They’re in the hands of the government…. Communities really do not get involved in a critical sense. Civil society really isn’t involved in defining priorities or establishing policy, financial control, or provision of service either.”

However, Sequera described the positive outcome of Paraguayan community-led efforts that included “polladas”—which raised money and gathered resources—to support individuals in need during the pandemic. Community organizations, such as the Protestant and Catholic church, were also influential in increasing community trust.

“Here, it’s not only that we all see the population as a beneficiary of our measures. No, it is important that we realize that the community controls what we do. Without that perspective, I don’t see possibilities for reform. And the pandemic has been a time of reform of the health care system here in Paraguay and that would have been unthinkable without participation of our citizenry.”

Without trust from the public and the belief that implemented policies and actions will be done in an equitable manner, it will continue to be difficult to secure community support. Fostering transparency and knowledge sharing can build the trust needed for a robust response.

Communication related to the COVID-19 pandemic has been a constant challenge for public health authorities and governments alike, highlighting the importance of better understanding misinformation and how to disseminate facts over myths so that people can make the most informed decisions to maximize safe behaviors.

CASE STUDY The Pandemic from a New Zealand Perspective

Siouxsie Wiles, University of Auckland, New Zealand, joined forces with Spinoff cartoonist Toby Morris to make the science of the pandemic clear and understandable. Their award-winning graphics have been translated into multiple languages and adapted by various governments and organizations around the world.

“People can look at the same evidence and come to different conclusions about how to act based on their values.”

“We want to provide information in bite-sized, understandable pieces, and we want it to be engaging and shareable…. We want everybody to understand, you know, the science behind the pandemic, how that science is changing. So that when decisions are made, they can understand why those decisions are made.”

Laura Chanchien Parajón and Miranda Durham, New Mexico Department of Health, introduced how an incident command structure (ICS) can be used by public health organizations to systematize efforts and prioritize equity. Parajón explained that as the number of available vaccines increased in New Mexico, the system became overwhelmed and there was uncoordinated communication, unclear role distribution, and little knowledge about who was receiving vaccines.

ICS can work for public health. It creates a systematic structure so you can have equity-driven decision making. If you embed [public health] inside the ICS, you can have results and actually pull a lot of people together through a community engagement process.”
Laura Chanchien Parajón, New Mexico Department of Health

“[ICS] really actually helped us to organize the huge number of active partners that we had, giving us a process for incorporating their feedback and taking action.”
Miranda Durham, New Mexico Department of Health

"Being the health system for everyone means that we have to deliver care where it’s needed. We shouldn’t always be asking patients to meet us where we are if we want to provide equitable access.”

“Service design and human-centered design strategies can help us do this. They can help us uncover ways to make care delivery more inclusive, better tailored to varied needs in spite of these barriers. These strategies can teach us how to design for what the patient has instead of what they lack. An intentional design can help us address health inequities.”

“We partnered with the right people, members of the community. We co-designed with the community, and we were physically embedded within the community to ensure their trust. And we iterated on the entire clinic model, often embracing low-tech approaches so that we could provide the most efficient but caring experience for the community.”

Peretz and Matiz discussed their efforts to integrate community health workers into the health care team, working alongside the providers to support patients and provide more information about what is happening outside the clinic walls to complete the picture. These community health workers should also be included on health care advisory boards and committees to offer their unique perspective and advocate on behalf of the patient population.

“Developing and nurturing trusting relationships with community partners is absolutely essential…. Our community partners are also the ones who inform us of what’s really happening in the community and help us understand how best to align our efforts collectively to ensure that we’re addressing those needs.”
Patricia Peretz, NewYork-Presbyterian Center for Community Health Navigation 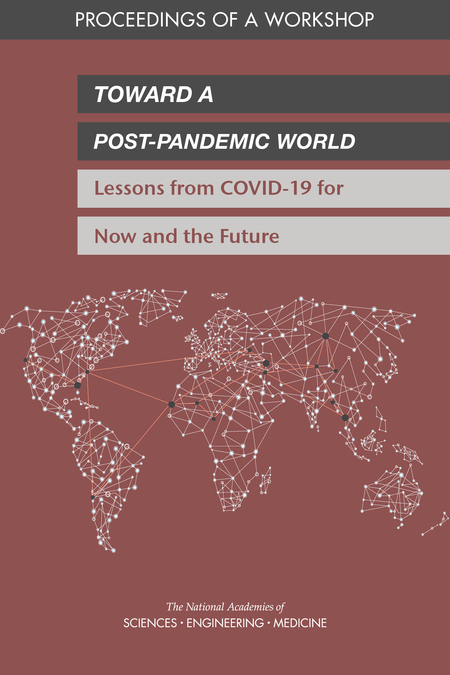 Toward a Post-Pandemic World: Lessons from COVID-19 for Now and the Future: Proceedings of a Workshop (2022)