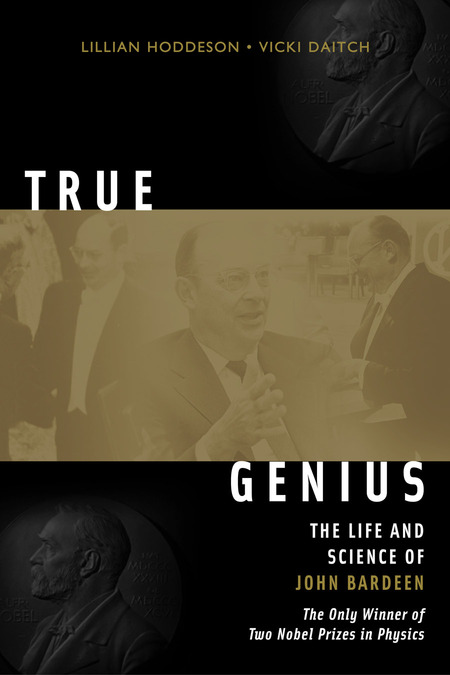 The Life and Science of John Bardeen: The Only Winner of Two Nobel Prizes in Physics (2002)

What is genius? Define it. Now think of scientists who embody the concept of genius. Does the name John Bardeen spring to mind? Indeed, have you ever heard of him?

Like so much in modern life, immediate name recognition often rests on a cult of personality. We know Einstein, for example, not just for his tremendous contributions to science, but also because he was a character, who loved to mug for the camera. And our continuing fascination with Richard Feynman is not exclusively based on his body of work; it is in large measure tied to his flamboyant nature and offbeat sense of humor.

These men, and their outsize personalities, have come to erroneously symbolize the true nature of genius and creativity. We picture them born brilliant, instantly larger than life. But is that an accurate picture of genius? What of others who are equal in stature to these icons of science, but whom history has awarded only a nod because they did not readily engage the public? Could a person qualify as a bona fide genius if he was a regular Joe?

The answer may rest in the story of John Bardeen.

John Bardeen was the first person to have been awarded two Nobel Prizes in the same field. He shared one with William Shockley and Walter Brattain for the invention of the transistor. But it was the charismatic Shockley who garnered all the attention, primarily for his Hollywood ways and notorious views on race and intelligence.

Bardeen's second Nobel Prize was awarded for the development of a theory of superconductivity, a feat that had eluded the best efforts of leading theorists -- including Albert Einstein, Neils Bohr, Werner Heisenberg, and Richard Feynman. Arguably, Bardeen's work changed the world in more ways than that of any other scientific genius of his time. Yet while every school child knows of Einstein, few people have heard of John Bardeen. Why is this the case?

Perhaps because Bardeen differs radically from the popular stereotype of genius. He was a modest, mumbling Midwesterner, an ordinary person who worked hard and had a knack for physics and mathematics. He liked to picnic with his family, collaborate quietly with colleagues, or play a round of golf. None of that was newsworthy, so the media, and consequently the public, ignored him.

John Bardeen simply fits a new profile of genius. Through an exploration of his science as well as his life, a fresh and thoroughly engaging portrait of genius and the nature of creativity emerges. This perspective will have readers looking anew at what it truly means to be a genius.

Contributor(s): Lillian Hoddeson and Vicki Daitch
Login or Register for a free MyNAP member account to save 10% off online and receive other benefits. [Learn More]

Contractual obligations prohibit us from offering a free PDF of this title published under the Joseph Henry Press imprint of the National Academies Press.

Lillian Hoddeson is a professor of history and a senior research physicist at the University of Illinois. She is the author of the critically acclaimed Crystal Fire: The Birth of the Information Age written with Michael Riordan. She lives in Urbana, Illinois, with her husband.

Vicki Daitch holds a Ph D. in history from the University of Illinois. She teaches at New Hampshire Technical Institute and works as a behavioral consultant for the local SPCA. Daitch lives in New Hampshire with her husband and their eleven Alaskan malamute sled dogs.