Get This Book
Visit NAP.edu/10766 to get more information about this book, to buy it in print, or to download it as a free PDF.
Page i Share Cite
Suggested Citation:"Front Matter." National Research Council. 2000. Catalytic Process Technology. Washington, DC: The National Academies Press. doi: 10.17226/10038.
×

This report by the Board on Manufacturing and Engineering Design was conducted with the support of the U.S. Department of Energy, Grant No. DP-FG41-95R110859. Any opinions, findings, conclusions, or recommendations expressed herein are those of the authors and do not necessarily reflect the view of the Department of Energy.

The Institute of Medicine was established in 1970 by the National Academy of Sciences to secure the services of eminent members of appropriate professions in the examination of policy matters pertaining to the health of the public. The Institute acts under the responsibility given to the National Academy of Sciences by its congressional charter to be an advisor to the federal government and, upon its own initiative, to identify issues of medical care, research, and education. Dr. Kenneth I. Shine is president of the Institute of Medicine.

BOARD ON MANUFACTURING AND ENGINEERING DESIGN

The chemical industry has a long history of combining theory (science) and practice (engineering) to create new and useful products. Catalysis has been, and continues to be, a key to the development and growth of this large, diverse industry. This report builds on previous studies, especially Technology Vision 2020, prepared in 1996 by a group of chemical industry organizations, as well as the collective industrial experience of committee members and presentations by representatives of industry and the national laboratories. The report provides an overview of current research on catalysis and identifies areas for future research and development with the potential for significant industrial impact.

I wish to thank the members of the committee for their hard work, enthusiasm, and diversity of thought. Innovation in this important area will depend on creative interchanges of ideas in the scientific community. The combined efforts of the entire catalysis community will be necessary to meet future technological challenges.

This report has been reviewed by individuals chosen for their diverse perspectives and technical expertise, in accordance with procedures approved by the NRC’s Report Review Committee. The purpose of this independent review is to provide candid and critical comments that will assist the authors and the NRC in making the published report as sound as possible and to ensure that the report meets the institutional standards for objectivity, evidence, and responsiveness to the study charge. The content of the review comments and draft manuscript remains confidential to protect the integrity of the deliberative process. We wish to thank the following individuals for their participation in the review of this report: Thomas Baker, Los Alamos National Laboratory; Norman Blank, Sika Corporation; Scott Han, Rohm and Haas; Lanny Schmidt, University of Minnesota; Jeffrey Siirola, Eastman Chemical Company; Gabor Somorjai, University of California, Berkeley; Gregory Whited, Genencor International, Inc.; and Ronald Yates, Dow Chemical Company.

Although the reviewers listed above have provided many constructive comments and suggestions, they were not asked to endorse the conclusions or recommendations nor did they see the final draft of the report before its release. The review of this report was overseen by George Keller, appointed by the Commission on Engineering and Technical Systems, who was responsible for making certain that an independent examination of this report was carried out in accordance with institutional procedures and that all review comments were carefully considered. Responsibility for the final content of this report rests entirely with the authoring committee and the institution.

Finally, the committee gratefully acknowledges the support of the staff of the Board on Manufacturing and Engineering Design, including Cung Vu, study

Next: Contents »
Catalytic Process Technology Get This Book
× 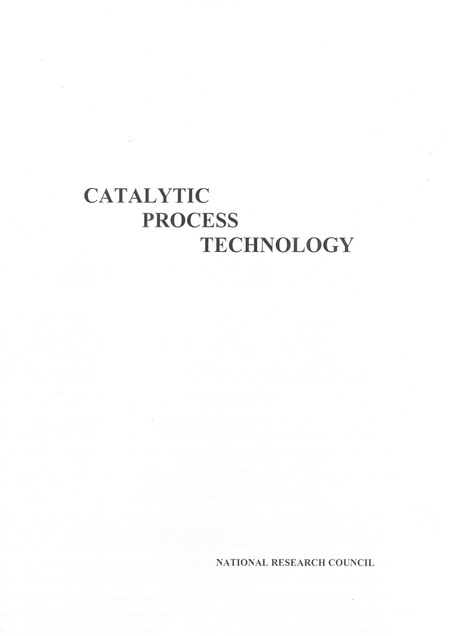