Chapter:Why Are Animals Used in Research?

Get This Book
Visit NAP.edu/10766 to get more information about this book, to buy it in print, or to download it as a free PDF.
« Previous: SCIENCE, MEDICINE, AND ANIMALS
Page 4 Share Cite
Suggested Citation:"Why Are Animals Used in Research?." Institute of Medicine. 1991. Science, Medicine, and Animals. Washington, DC: The National Academies Press. doi: 10.17226/10089.
×

Why Are Animals Used in Research?

Human beings use animals for a wide variety of purposes, including research. The approximately 260 million people in the United States keep about 110 million dogs and cats as pets. More than 5 billion animals are killed in the United States each year as a source of food. Animals are used for transportation, for sport, for recreation, and for companionship.7

Animals are also used to learn more about living things and about the illnesses that afflict human beings and other animals. By studying animals, it is possible to obtain information that cannot be learned in any other way. When a new drug or surgical technique is developed, society deems it unethical to use that drug or technique first in human beings because of the possibility that it would cause harm rather than good. Instead, the drug or technique is tested in animals to make sure that it is safe and effective.

Animals also offer experimental models that would be impossible to replicate using human subjects. Animals can be fed identical and closely monitored diets. As with inbred mice, members of some animal species are genetically identical, enabling researchers to compare different procedures on identical animals. Some animals have biological similarities to humans that make them particularly good models for specific diseases, such as rabbits for atherosclerosis or monkeys for polio. (The polio vaccine was developed, and its safety is still tested, in monkeys.) Animals are also indispensable to the rapidly growing field of biotechnology, where they are used to develop, test, and make new products such as monoclonal antibodies.

Researchers draw upon the full range of living things to study life, from bacteria to human beings.8 Many basic biological processes are best studied in single cells, tissue cultures, or plants, because they are the easiest to grow or examine. But researchers also investigate a wide range of animal species, from insects and nematodes to dogs, cats, and monkeys. In particular, mammals are essential to researchers because they are the closest to us in evolutionary terms. For example, many diseases that affect human beings also affect other mammals, but they do not occur in insects, plants, or bacteria.

Far fewer animals are used in research than are used for other purposes. An estimated 17 to 22 million vertebrate animals are used each year in research, education, and testing—less than 1 percent of the number killed for food.9 About 85 percent of these animals are rats and mice that have been bred for research. In fiscal year 1988, about 142,000 dogs and 52,000 cats were used in experimentation, with 40,000 to 50,000 of those dogs being bred specifically for research and the others being acquired from pounds.10 Between 50,000 and 60,000 nonhuman primates, such as monkeys and chimpanzees, are studied each year, many of them coming from breeding colonies in the United States.11

Next: How Have Animals Contributed to Improving Human Health? »
Science, Medicine, and Animals Get This Book
× 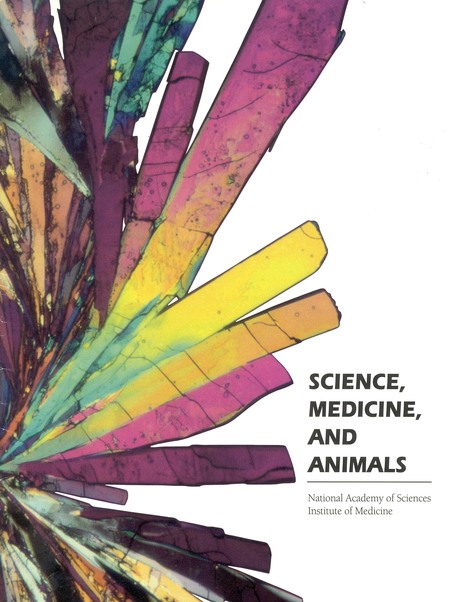