Get This Book
Visit NAP.edu/10766 to get more information about this book, to buy it in print, or to download it as a free PDF.
« Previous: 6. Health and Biomedical Sciences
Page 116 Share Cite
Suggested Citation:"7. The Environment." National Research Council. 2001. Physics in a New Era: An Overview. Washington, DC: The National Academies Press. doi: 10.17226/10118.
×

Physics lies at the core of the earth sciences. It is essential for understanding the deep structure of Earth and the natural phenomena that affect Earth's surface, such as earthquakes and volcanic eruptions. These topics, along with others aspects of the physics of Earth, are discussed in Chapter 2, “ Complex Systems.”

Physics also provides a basis for understanding the dynamic interactions between the atmosphere and the oceans and for the study of short-term weather and long-term climate change. This understanding is essential to stewardship of the environment: for addressing problems like urban air pollution and lake acidification and for dealing with natural hazards such as floods and hurricanes.

Much of physics is the study of energy and its transformation, and energy lies at the heart of important environmental issues. Climate is shaped by how the energy of the Sun affects movement of the atmosphere and oceans and how they in turn distribute energy around the world. Most of the impact of humans on the environment revolves around the need for energy production.

To understand the complexities of the environment and to address problems effectively, the underlying physics must be combined with chemistry, geology, atmospheric and oceanic science, and biology. The ocean-atmosphere system, environmental monitoring and improvement, and energy production and the environment are three areas where an understanding of the basic physics has played a central role and where it is crucial for further progress.

In the years ahead, a continuing improvement in our understanding of the remarkable concentration of energy involved in severe weather patterns

will lead to much greater predictive capability and earlier warning than are available today. This progress will come from a combination of theoretical modeling, computer simulation, and direct measurement, each drawing on the tools of physics and each conducted by researchers schooled in the methods of physics.

Until the 1980s, atmospheric science had concentrated on the theory and practice of weather forecasting, which involved a time scale of 6 to 10 days. Weather forecasting was based on an understanding of the prevailing instability of large-scale, mid-latitude phenomena resulting from an analysis of the Navier-Stokes fluid dynamic equations. In the oceans, meanwhile, the emphasis was on attempting to understand the physical processes that accounted for mass and heat transport in cases such as the Gulf Stream and the circulations of the ocean basins. At that stage of understanding, it was thought that variability in the oceans and variability in the atmosphere were relatively independent of each other on time scales shorter than decades.

More recently, it has been realized that the ocean and the atmosphere are coupled on much shorter time scales. This realization emanated from the developing understanding of the El Niño phenomenon in the Pacific Ocean. A series of positive and negative feedbacks between the ocean and the atmosphere create this phenomenon, an oscillation on a grand scale, which is responsible for an instability of the climate system in the Pacific region. The understanding of this phenomenon, which rests on the joint fluid dynamics of the ocean and the atmosphere, suggests a predictability in the climate system. Predictability has been demonstrated not only on the weather time scale of 6 to 10 days but also on an interannual time scale of 6 months to 1 or 2 years, the time scale of the El Niño-coupled ocean-atmosphere instability. Since the pioneering work on the El Niño phenomenon, it has been shown that the great monsoon systems of the planet are also coupled ocean-atmosphere phenomena on the same time scale, so that their evolution depends on the same joint dynamics and thermodynamics of the atmosphere and ocean.

An ever-larger fraction of the environmental challenges facing humankind consists of problems requiring better management of human activity to reduce its deleterious impact on natural systems. Problems of this kind arise with increasing frequency because of the larger and more prosperous human population. But they can also be addressed with greater success because of our deeper understanding of the affected systems and an improved capacity

to detect the impact of human beings. These kinds of problems come at all scales: from an individual room whose air is degraded by radon or organic pollutants, to an urban airshed subject to the buildup of pollutants intensified in particular seasons, to the global stratosphere, whose chemical composition is being altered by chlorofluorocarbons and nitrogen oxides.

The discovery of the destruction of stratospheric ozone by chlorofluorocarbons is a classic example of the use of physical science to understand how human beings change a natural system. Working out the details of this problem has involved a blend of the chemistry of heterogeneous reactions and the physics of fluids and radiation transport.

Global warming is partly a consequence of altering the carbon cycle on the planet by the burning of fossil fuels. The increase of carbon dioxide appears to foster the growth of other greenhouse gases by alteration of the global hydrological cycle. An understanding of global warming and the associated climate change draws on a number of disciplines. Geophysical fluid dynamics is necessary to understand the structure of the basic climate system within which these climate changes occur. At the same time, chemical and biochemical cycles are active partners in the dynamics and thermodynamics of the climate system.

Effective management of human interaction with an environmental system requires simultaneous progress on several fronts: an understanding of the system in the absence of human impact; an understanding of the way human impact changes the system; and an understanding of measures available to reduce this impact, such as substituting one form of energy production for another. Much progress has been made over the past few decades in understanding the workings of those environmental systems that are particularly vulnerable to human impact, ranging from the thermal behavior of lakes to the chemistry of the stratosphere. Many of these systems are now well understood, through a combination of measurement, modeling, simulation, and theory.

One of the best tools for measuring human impact on climate is the identification of small concentrations of tracer atoms in environmental samples. Various long-lived radioactive nuclei serve as such tracers in much the same way that short-lived radioactive nuclei serve as tracers for the study of biological systems. The use of these tracers has grown out of the understanding of the formation of radioactive elements and their decay and detection. This method for environmental monitoring has become increasingly important as ever more sensitive detection techniques are developed (see sidebar “Monitoring the Environment”).

ENERGY PRODUCTION AND THE ENVIRONMENT

Improvements in energy efficiency contribute directly to environmental quality, and many of these improvements are applications of physics. Lighting efficiency has increased dramatically, progressing from the kerosene lamp to the incandescent bulb to the fluorescent light. Window thermal resistance, with its direct effect on the energy required for space heating and cooling, has been greatly increased by the use of thin-film coatings that embody insights from atomic physics. The oxygen sensor in the automobile exhaust, which permits far lower emissions of hydrocarbons, carbon monoxide, and nitrogen oxides, is another application of physics. Metal recycling is also in this category: The increasing competitiveness of secondary metals production, or recycling, relative to primary metals production resurfed in part from numerous innovations in materials science.

The substitutability and attractiveness of alternative forms of energy production are also important. Fossil fuels inevitably produce carbon dioxide as a by-product of energy extraction. The two principal alternatives are nuclear power (both nuclear fission and nuclear fusion) and renewable energy (in many forms, including wind, hydropower, photovoltaic cells, and solar thermal energy). Research and development efforts on all of these alternative technologies are under way around the world. Each has its strengths and weaknesses. The sustainability of industrialized society is much more likely if humanity continues to pursue a broad portfolio of energy production options.

As long as fossil fuels continue to dominate energy production, the global energy system will require the sophisticated management of carbon. Carbon management strategies are already being considered and are attracting the attention of physicists around the world. An important class of strategies involves separating the carbon content from the energy content of fossil fuels by chemically processing the fossil fuels into carbon dioxide and hydrogen. The carbon dioxide would be treated as a waste product requiring sequestration from the atmosphere; for example, it might be piped to deep underground saline aquifers. The world would run its vehicles and buildings and appliances and factories on some combination of electricity and hydrogen, the two most environmentally preferred secondary energy carriers. The challenge of making a hydrogen economy safe and affordable will demand much progress in areas where physics is indispensable, ranging from molecular strategies for hydrogen storage to advanced materials for hydrogen fuel cells.

Next: 8. National Security »
Physics in a New Era: An Overview Get This Book
× 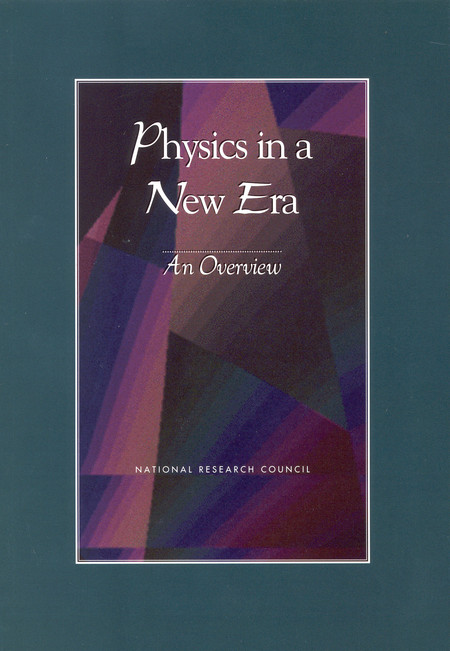 Physics at the beginning of the twenty-first century has reached new levels of accomplishment and impact in a society and nation that are changing rapidly. Accomplishments have led us into the information age and fueled broad technological and economic development. The pace of discovery is quickening and stronger links with other fields such as the biological sciences are being developed. The intellectual reach has never been greater, and the questions being asked are more ambitious than ever before.

Physics in a New Era is the final report of the NRC’s six-volume decadal physics survey. The book reviews the frontiers of physics research, examines the role of physics in our society, and makes recommendations designed to strengthen physics and its ability to serve important needs such as national security, the economy, information technology, and education.