Chapter:1 Introduction to Abrupt Changes in the Earth's Climate

Get This Book
Visit NAP.edu/10766 to get more information about this book, to buy it in print, or to download it as a free PDF.
« Previous: Executive Summary
Page 10 Share Cite
Suggested Citation:"1 Introduction to Abrupt Changes in the Earth's Climate." National Research Council. 2002. Abrupt Climate Change: Inevitable Surprises. Washington, DC: The National Academies Press. doi: 10.17226/10136.
×

1
Introduction to Abrupt Changes in the Earth’s Climate

Large, abrupt climate changes have affected hemispheric to global regions repeatedly, as shown by numerous paleoclimate records (Broecker, 1995, 1997). Changes of up to 16°C and a factor of 2 in precipitation have occurred in some places in periods as short as decades to years (Alley and Clark, 1999; Lang et al., 1999). However, before the 1990s, the dominant view of past climate change emphasized the slow, gradual swings of the ice ages tied to features of the earth’s orbit over tens of millennia or the 100-million-year changes occurring with continental drift. But unequivocal geologic evidence pieced together over the last few decades shows that climate can change abruptly, and this has forced a reexamination of climate instability and feedback processes (NRC, 1998). Just as occasional floods punctuate the peace of river towns and occasional earthquakes shake usually quiet regions near active faults, abrupt changes punctuate the sweep of climate history.

The climate system in the past has made large jumps between typical patterns of behavior, as in the mechanical analogy presented in Box 1.1. Especially large and abrupt climate changes have occurred repeatedly over the last 100,000 years during the slide into and climb out of the most recent global ice age. Those changes persisted into the current warm period and probably occurred during previous ice ages (Sarnthein et al., 1994; Broecker, 1995, 1997; Alley and Clark, 1999; Stocker, 2000). Our ability to understand the potential for future abrupt changes in climate is limited by our

lack of understanding of the processes that control them. For example, mechanisms proposed to explain abrupt climate shifts do not fully describe the patterns of variability seen in either the paleoclimate or the historical records.

Long-term geological records show that in the past there were different stable states of the climate system from those of today. Differences in these climate states involved the coupled atmosphere, ocean, ice, and biological systems. Some of these old states, such as the proposed “snowball earth” (when most or all of the planet was frozen) (Harland, 1964; Caldeira and Kasting, 1992; Kirschvink, 1992; Hoffman et al., 1998), occurred long ago when geological and astronomic conditions were substantially different from today. However, others, such as the warm-polar “hothouse” pattern, were reached relatively recently, when geological conditions were similar to those of our modern earth (Barron, 1987). Despite the recognition that extreme shifts in the climate system can occur, little information is available on whether transitions between climate states are possible under modern or near-future conditions and whether such transitions would be abrupt.

Understanding how and why climate might change abruptly has important implications. The just-completed US National Assessment (National Assessment Synthesis Team, 2000) emphasizes the possible effects of gradual climate change on societies and ecosystems, and it concludes that effects will probably be larger in the case of faster changes that leave less time for adaptation or that give less warning that might make mitigation possible. Thus, when considering the possible causes and impacts of abrupt climate change, numerous important questions arise, including:

search strategy, and this report seeks to identify the key supporting research needs.

To use this definition in a policy setting or public discussion requires some additional context, as is explored at length in Chapter 5, because while many scientists measure time on geological scales, most people are concerned with changes and their potential impacts on societal and ecological time scales. From this point of view, an abrupt change is one that takes place so rapidly and unexpectedly that human or natural systems have difficulty adapting to it. Abrupt changes in climate are most likely to be significant, from a human perspective, if they persist over years or longer, are larger than typical climate variability, and affect sub-continental or larger regions. Change in any measure of climate or its variability can be abrupt, including change in the intensity, duration, or frequency of extreme events. For example, single floods, hurricanes, or volcanic eruptions are important for humans and ecosystems, but their effects generally would not be considered abrupt climate changes unless the climate system is pushed over a threshold into a new state; however, a rapid, persistent change in the number or strength of floods or hurricanes might be an abrupt climate change.

The quintessential abrupt climate change was the end of the Younger Dryas interval about 11,500 years ago, when hemispheric to global climate shifted dramatically, in many regions by about one-third to one-half the difference between ice-age and modern conditions, with much of the change occurring over a few years (Alley, 2000). The changes affected many environmental parameters such as temperature and rainfall (Figure 1.2). Weaker, but still of hemispheric extent, was a short cooling spell 8,200 years ago that lasted for about 200 years (Alley et al., 1997). Although more regionally limited, the apparent change in El Niño behavior toward generally warmer and wetter conditions around 1976 (Nitta and Yamada, 1989; Trenberth, 1990; Graham, 1994) could also be considered an abrupt change. Thus, studies of abrupt climate change overlap with studies of ice 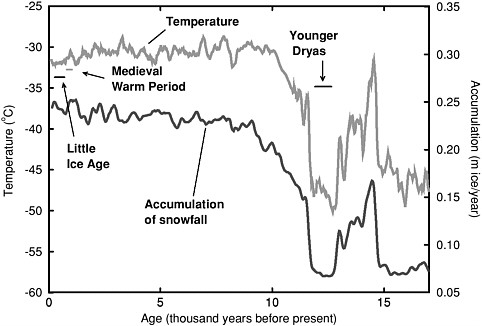 FIGURE 1.2 Climate changes in central Greenland over the last 17,000 years. Reconstructions of temperature and snow accumulation rate (Cuffey and Clow, 1997; Alley, 2000) show a large and rapid shift out of the ice age about 15,000 years ago, an irregular cooling into the Younger Dryas event, and the abrupt shift toward modern values. The 100-year averages shown somewhat obscure the rapidity of the shifts. Most of the warming from the Younger Dryas required about 10 years, with 3 years for the accumulation-rate increase (Figure 2.2). A short-lived cooling of about 6°C occurred about 8,200 years ago (labeled 8ka event), and is shown with higher time resolution in Figure 2.3. Climate changes synchronous with those in Greenland affected much of the world, as shown in Figures 2.1 and 2.3.

ages and other features of deeper time and with studies of decadal-centennial climate modes and variability. In focusing on the tendency of climate to change in fits and starts rather than smoothly, and thus to surprise humans and ecosystems, the study of abrupt climate change is distinct from related branches of climatology.

SCIENTIFIC EVIDENCE, PROCESSES, AND CONSEQUENCES FOR SOCIETY AND ECOSYSTEMS

Abrupt climate change has affected societies. For example, evidence in geologic records suggests that abrupt but persistent droughts caused so-

cial disruption for Mayan culture (Hodell et al., 1995; Gill 2000) and that abrupt climate shifts played a role in the collapse of Mesopotamian civilization (Weiss et al., 1993). Recognizing the potential for abrupt changes in climate has constituted a paradigm shift for the research community, but many questions concerning the processes that cause and mediate abrupt climate change remain, including the following.

Recent research has shown that human activities are affecting climate, but it is often difficult to separate human-induced changes from those occurring naturally (Intergovernmental Panel on Climate Change, 2001b). The question arises whether anthropogenic influences will trigger abrupt climate change. It is not now possible to answer that question, because the processes that cause abrupt climate change are not sufficiently understood.

There is little doubt that the rate, magnitude, and regional extent of abrupt transitions to different climate states could have far-reaching implications for society and ecosystems. Research has shown that, in response to gradual changes in climate, much of the economic capital stock1 and some plants and animals may adjust without major disruption. But rapid changes in climate could have major effects, disrupting ecological or economic systems in a manner that prevents their timely replacement, repair, or adaptation.

Ecological systems are particularly vulnerable to abrupt climate change because they are long-lived and relatively immobile. In addition, these systems often have low adaptive capability. Their vulnerability is increased by human activities that alter ecosystems, reducing species abundance and composition and blocking migration. One reason for the vulnerability of eco-

logical and economic systems to the effects of abrupt climate change is that these systems are peculiar to particular locations and adapted to particular climates. Effects are likely to increase when abrupt climate change causes ecological systems to cross thresholds. For example, climatic conditions change greatly over short distances in some areas, and cause similarly steep gradients in vegetation types, allowing even a small climate change to cause dramatic change in vegetation type in a given locale. Rapid climate change will probably result in the redistribution—and possibly in the extinction—of terrestrial and marine species and have major effects on ecosystems worldwide.

Water resources might be greatly affected by abrupt changes in climate. Changes in water supplies could result in increased demands for water, affect agricultural production, and potentially trigger adverse health effects. Those consequences and the economic effects resulting from them provide a strong motivation for enhancing the understanding of physical processes that cause abrupt climate change.

THE CHARGE TO THE COMMITTEE

Because there was no comprehensive review of the science and potential impacts of abrupt climate change and no overall plan for improving the understanding of abrupt climate change, the US Global Change Research Program asked the National Research Council for assistance. In response, the NRC formed the Committee on Abrupt Climate Change, which was charged to:

A committee of 11 members was appointed from the paleoclimate, climate modeling, and observational climate communities, including those investigating the cryosphere, atmosphere, ocean, and terrestrial systems. To help to focus priorities in abrupt climate change research, representatives of the economic and social science research communities were also part of the committee. Oversight for the committee was provided jointly by the Ocean Studies Board, the Polar Research Board, and the Board on Atmospheric Science and Climate.

To conduct its work, the committee met three times and held two workshops to allow for broad community participation. The first workshop, at Lamont-Doherty Earth Observatory, brought together members of the physical science community as well as those from the social science community who specialize in the societal impacts of climate change. From this workshop, it was decided that to properly address the ecological and societal impacts of abrupt climate change, an additional two-day workshop concentrating on these issues would be needed. This meeting, held in Washington, D.C., was primarily funded by the Yale/NBER Program on International Environmental Economics and provided essential information used to develop the climate impacts portion of this report. 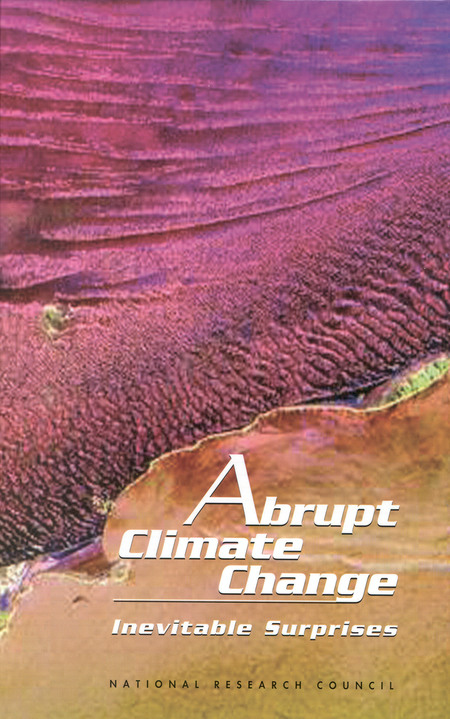 The climate record for the past 100,000 years clearly indicates that the climate system has undergone periodic--and often extreme--shifts, sometimes in as little as a decade or less. The causes of abrupt climate changes have not been clearly established, but the triggering of events is likely to be the result of multiple natural processes.

Abrupt climate changes of the magnitude seen in the past would have far-reaching implications for human society and ecosystems, including major impacts on energy consumption and water supply demands. Could such a change happen again? Are human activities exacerbating the likelihood of abrupt climate change? What are the potential societal consequences of such a change?

Abrupt Climate Change: Inevitable Surprises looks at the current scientific evidence and theoretical understanding to describe what is currently known about abrupt climate change, including patterns and magnitudes, mechanisms, and probability of occurrence. It identifies critical knowledge gaps concerning the potential for future abrupt changes, including those aspects of change most important to society and economies, and outlines a research strategy to close those gaps.

Based on the best and most current research available, this book surveys the history of climate change and makes a series of specific recommendations for the future.