Looking Over the Fence at Networks: A Neighbor's View of Networking Research (2001)

Get This Book
Visit NAP.edu/10766 to get more information about this book, to buy it in print, or to download it as a free PDF.
« Previous: 4. Making Disruptive Prototypes: Another Approach to Stimulating Research
Page 13 Share Cite
Suggested Citation:"5. Concluding Observations." National Research Council. 2001. Looking Over the Fence at Networks: A Neighbor's View of Networking Research. Washington, DC: The National Academies Press. doi: 10.17226/10183.
×

A reviewer of a draft of this report observed that this proposed framework—measure, develop theory, prototype new ideas—looks a lot like Research 101. Why did this exploratory effort end up framing a research program along these lines? From the perspective of the outsiders, the insiders did not show that they had managed to execute the usual elements of a successful research program, so a back-to-basics message was fitting.

Both insiders and outsiders agreed that progress on each of these fronts would require effort, attention, and resources, and that each posed its own special challenges, and they also agreed that such investment could have significant payoffs. It is, to be sure, a daunting challenge, because the three dimensions of Internet ossification identified in Chapter 1 stifle the design of innovative alternatives. It is also possible that the workshop participants’ enthusiasm about opportunities for change might be tempered by seeing new ideas realized. The outsiders seriously considered the words of Harry S.Truman: “I have found the best way to give advice to your children is to find out what they want and then advise them to do it.”1 If they had been Trumanesque, they would have applauded continuing research on higher Internet bandwidth, on quality of service protocols, and so forth. However, the outsiders expressed the view that the network research community should not devote all—or even the majority—of its time to fixing current Internet problems.

Instead, networking research should more aggressively seek to develop new ideas and approaches. A program that does this would be centered on the three M’s—measurement of the Internet, modeling of the Internet, and making disruptive prototypes. These elements can be summarized as follows:

When contemplating launching a new agenda along these lines it is also worth noting, as workshop participants did repeatedly during the course of the workshop, that in the past, the networking research community made attempts at broad new research initiatives, some of which failed at various levels and others of which succeeded beyond expectations. There is little systematic process for learning from these attempts, however. Failures are rarely documented, despite the potential value of documentation to the community. Failures can be embarrassing to the individuals concerned, and writing up failures is unlikely to be considered as productive as

writing up successes. Accordingly, it would be useful to convene an “autopsy workshop” from time to time, perhaps even annually, devoted to learning from past history, at both the individual solution level and the larger research areas level. Documenting negative results will help avoid wasted effort (the reinvention of faulty wheels). A postmortem on larger research areas will help to guide future research by increasing understanding of the specific successes and failures, as well as the underlying reasons for them (economics, for example, or politics). Within research areas, the successes and failures of interest include attempts at disruption to conventional networking, which so far have met with mixed success. Two initial candidates suggested by discussions at this workshop would be quality of service and active networking.

Next: Appendix A: Biographies of Committee Members »
Looking Over the Fence at Networks: A Neighbor's View of Networking Research Get This Book
× 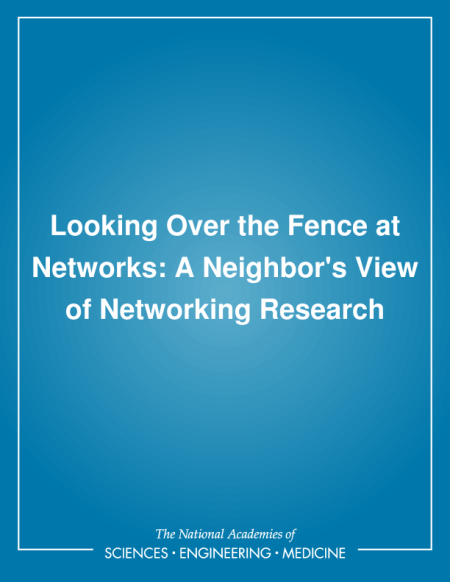 A remarkable creation, the Internet encompasses a diversity of networks, technologies, and organizations. The enormous volume and great variety of data carried over it give it a rich complexity and texture. It has proved difficult to characterize, understand, or model in terms of large-scale behaviors and a detailed understanding of traffic behavior. Moreover, because it is very difficult to prototype new networks—or even new networking ideas—on an interesting scale, data-driven analysis and simulation are vital tools for evaluating proposed additions and changes to its design. Some argue that a vision for the future Internet should be to provide users the quality of experience they seek and to accommodate a diversity of interests. Looking Over the Fence at Networks explores how networking research could overcome the evident obstacles to help achieve this vision for the future and otherwise better understand and improve the Internet. This report stresses looking beyond the current Internet and evolutionary modifications thereof and aims to stimulate fresh thinking within the networking research community.