Visit NAP.edu/10766 to get more information about this book, to buy it in print, or to download it as a free PDF.
Page i Share Cite
Suggested Citation:"Front Matter." National Research Council. 1988. Fisheries Technologies for Developing Countries. Washington, DC: The National Academies Press. doi: 10.17226/1024.
×

Fisheries Technologies for Develloping Countries Report of an Ac! Hoc Pane] of the Board on Science and Technology for International Development Office of International Affairs National Research Council National Academy Press Washington, D.C. 1988

Preface The future of traditional fisheries will be shaped by the at- tention given to their special problems and by the recognition of their unique value. Declining stocks of readily accessible fish, competition from industrial fishermen, high operating costs, less than optimal gear and vessels, poor storage and marketing facil- ities, and little access to credit all tend to limit development for fishermen in the traditional sector. Culturally and economically acceptable technologies can help with some of these problems, but policy changes and interventions must also be part of the assistance strategy. The effort is worthwhile. Traditional fishermen are important contributors to the food supply in developing countries. They currently account for about one-quarter of the worId's total fish catch-an estimated 20 million tons of a tote] of 80 million. Al- though only about one-fifth of the fish caught in Latin America come from the traditional sector, in Asia these fishermen provide two-thirds of the catch, and in Africa, five-sixths. Traditional fishermen are economically important for other reasons as well: their boats and gear are locally produced, easily repaired with local parts, and represent a low capital investment; their fish-capture techniques and propulsion methods are both low v

V1 PREFACE energy consumers. Commercial fishing boats and gear, in con- trast, are largely imported, and therefore often require imported spare parts. Moreover, they require a high capital investment and consume large amounts of energy to reach and capture fish. There is also more wastage of by-catch from their operations. Many developing countries have ignored traditional fishermen and have concentrated their assistance in industrial fisheries. Tra- ditional fishermen have suffered more than neglect from this pol- icy: commercial trawlers operating near shore can simultaneously harvest large numbers of fish (including juveniles) and destroy spawning and breeding grounds. The adverse effects for the tradi- tional fishermen are both immediate and persistent; current stocks are depleted and the potential for recovery Is reduced. Developing countries could increase their fish harvest and im- prove the quality of life for their coastal dwellers by providing traditional fishing communities with access to modest technical and financial resources and by assuring protection for their fishing grounds. The evaluation and introduction of some of the technolo- gies described in this report could initiate this process. ****** Information in this report was largely derived through a meet- ing (participants Bated on pages in-iv) at the University of Mi- am~'s Rosenstiel School of Marine and Atmospheric Sciences in Miami, Florida, August 13-15, 1985. Additional data was oh tanned through correspondence with fisheries experts throughout the world.

Next: Overview »
Fisheries Technologies for Developing Countries Get This Book
× 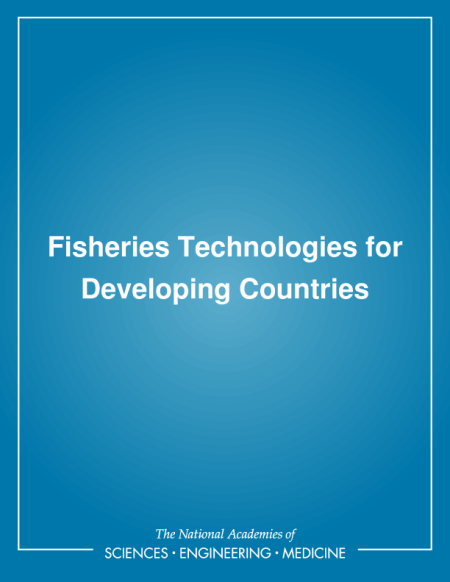 In developing countries, traditional fishermen are important food contributors, yet technological information and development assistance to third-world nations often focuses on agriculture and industrial fishing, without addressing the needs of independent, small-scale fishermen.

This book explores technological considerations of small-scale, primitive fishing technologies, and describes innovative, relatively inexpensive methods and tools that have already been successfully applied in developing countries. It offers practical information about all aspects of small-scale fishing, including boat design and construction, fishing methods and gear, artificial reef construction and fish aggregating devices, techniques for coastal mariculture, and simple methods for processing and preserving fish once they are caught. Fisheries Technologies for Developing Countries is illustrated throughout with photographs of the devices and construction methods described in the text.