Get This Book
Visit NAP.edu/10766 to get more information about this book, to buy it in print, or to download it as a free PDF.
« Previous: 4. Areas Needing Continued Technical Development
Page 41 Share Cite
Suggested Citation:"5. Findings, Conclusions, and Recommendations." National Research Council. 2001. Commercial Supersonic Technology: The Way Ahead. Washington, DC: The National Academies Press. doi: 10.17226/10283.
×

For decades, the speed of commercial aviation was constrained by the sound barrier. Even with the Concorde, supersonic flight was unavailable except on a few routes and only for those willing and able to pay the high airfares. Commercially successful supersonic flight will only occur when technology is developed and assembled into an aircraft that can be profitably manufactured in large quantities (i.e., hundreds of aircraft) and that is affordable for users and environmentally acceptable to society at large.

The committee concluded that foreseeable technological advances will be able to solve many key customer and design issues, particularly for commercial supersonic aircraft with cruise speeds of less than approximately Mach 2. But much work remains to be done. New, focused research is needed in several areas where existing efforts are unlikely to close the gap between the state of the art and aircraft requirements (Finding 1). However, new initiatives in these areas will be counterproductive if they divert resources from existing efforts that are also necessary to the development of a commercial supersonic aircraft (Finding 2).

Finding 1. An economically viable, environmentally acceptable supersonic commercial aircraft with a cruise speed of less than approximately Mach 2 requires continued development of technology on a broad front (see Finding 2). In addition, research in the following five areas of critical importance could lead to important breakthroughs, but only if current research is augmented by new, focused efforts (or significant expansions of existing efforts):

Conclusion 1. Research and technology development in the areas listed in Findings 1 and 2 could probably enable operational deployment of environmentally acceptable, economically viable commercial supersonic aircraft in 25 years or less—perhaps a lot less, with an aggressive technology development program for aircraft with cruise speeds less than approximately Mach 2.

The situation is somewhat different for commercial supersonic aircraft with cruise speeds above approximately Mach 2. The most efficient cruise altitudes are higher for higher cruise speeds. Aircraft with cruise speeds in excess of Mach 2 will normally cruise in the stratosphere, where engine emissions have a greater potential for climate change and depletion of atmospheric ozone. Water vapor, which is benign in the lower atmosphere, may have significant, long-lasting effects in the stratosphere and pose a serious limitation on high-speed, high-altitude flight. Also, at higher speeds, air friction creates higher temperatures. For cruise speeds of about Mach 2.4, new classes of structural materials are needed to meet strength and weight requirements. The noise suppression problem also becomes more challenging. The optimal engine bypass ratio is lower at higher Mach numbers, which leads to increased jet exhaust velocities and greater take-off noise. This makes it more difficult to design a nozzle that provides adequate noise suppression without becoming so large and heavy that the vehicle becomes uneconomical.

Finding 3. An economically viable supersonic commercial aircraft with a cruise speed in excess of approximately Mach 2 would require research and technology development in all of the areas cited in Findings 1 and 2. In addition, significant technology development would be needed to overcome the following barriers:

The environmental barriers associated with development of a supersonic transport with a cruise speed in excess of approximately Mach 2 are especially challenging. The most likely path to operational deployment of an environmentally acceptable, economically viable commercial supersonic aircraft within the next 25 years lies in research areas listed in Findings 1 and 2 as they would apply to an aircraft with a cruise speed of less than approximately Mach 2. Far-out technologies may be interesting and worth investigating, but they have little to do with development of a commercial supersonic aircraft in the foreseeable future.

Breakthrough aviation technologies are generally proprietary, competition-sensitive, and/or classified. Few individuals or organizations are willing to divulge publicly detailed information on such technologies. However, once the government has identified areas of interest and funds an appropriate research program, industry will respond with detailed proposals. For example, DARPA’s Quiet Supersonic Platform Program is developing technology that would contribute to advanced supersonic aircraft with substantially reduced sonic boom, reduced takeoff and landing noise, and increased efficiency. Research areas include airframe shaping to reduce sonic boom, integration of low-specific-thrust propulsion systems, advanced inlet concepts, particulate injection into the engine exhaust, supersonic laminar flow, ceramics, and localized flow heating to increase virtual body length (and reduce sonic boom). Although detailed information about this research is still not publicly available, NASA has full access to it. In fact, the Quiet Supersonic Platform is managed by a NASA employee assigned to DARPA.

Recommendation 1. NASA should focus new initiatives in supersonic technology development in the areas identified in Finding 1 as they apply to aircraft with cruise speeds of less than approximately Mach 2. Such initiatives should be coordinated with similar efforts supported by other federal agencies (e.g., the DARPA Quiet Supersonic Platform Program).

Recommendation 2. For the technologies listed in Finding 2, NASA should allocate most of the available resources on goals and objectives relevant to aircraft with cruise speeds of less than approximately Mach 2. NASA should focus remaining resources on the areas listed in Finding 3 (i.e., the highest risk areas for cruise speeds greater than approximately Mach 2). Again, NASA activities should be coordinated with similar efforts supported by other federal agencies.

For each of the HSR Program’s critical technology elements, the general goal was to demonstrate a TRL of 6 (i.e., system/subsystem model or prototype demonstrated in a relevant environment). This goal was appropriate, in part because of the large investment required and the high risk that individual technologies might not lead to a viable commercial product. In fact, even if the HSR Program had been completed, additional fundamental technology development and validation would have been required to prepare and demonstrate that critical technologies were ready for use in a commercial transport (NRC, 1997). Maintaining a goal of TRL 6 for supersonic research is essential if the results are going be adopted by commercial product development programs. NASA should continue to recognize TRL 6 as the appropriate goal for supersonic technology programs intending to transfer research results to a commercial product.

Recommendation 3. NASA and other federal agencies should advance the technologies listed in Findings 1 and 2 and Recommendations 1 and 2 to technology readiness level 6 to make it reasonably likely that they will lead to the development of a commercial product.

Affordable, reliable, and safe air transportation is important to quality of life and economic growth. The global transportation infrastructure would be enhanced by the addition of a truly high-speed transportation element. If the United States intends to maintain its supremacy in the commercial aerospace sector, it has to take a long-term perspective and channel adequate resources into research and technology development. The technological challenges to commercial supersonic flight can be overcome, as long as the development of key technologies is continued. Without continued effort, however, an economically viable, environmentally acceptable, commercial supersonic aircraft is likely to languish.

Next: Appendix A. Biographies of Committee Members »
Commercial Supersonic Technology: The Way Ahead Get This Book
× 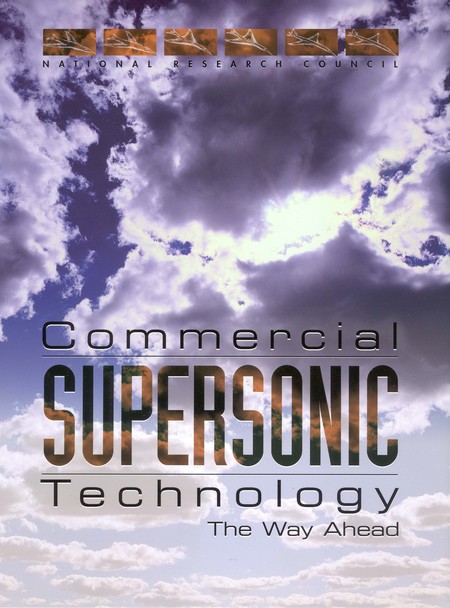