Get This Book
Visit NAP.edu/10766 to get more information about this book, to buy it in print, or to download it as a free PDF.
« Previous: Appendix C: Supplementary Statistical Results
Page 104 Share
Suggested Citation:"Appendix D: Rollover Information from NHTSA’s Website." Transportation Research Board. 2002. An Assessment of the National Highway Traffic Safety Administration's Rating System for Rollover Resistance: Special Report 265. Washington, DC: The National Academies Press. doi: 10.17226/10308.
×

How To Use This Chart

Frontal and Side Crash Test Ratings

Why is consumer information for vehicle rollovers necessary?

While rollovers do not occur as frequently as other types of crashes (see Figure D-1), when they do occur, the result is often serious injury or death. Rollovers accounted for more than 10,000 fatalities in the United States in 1999, 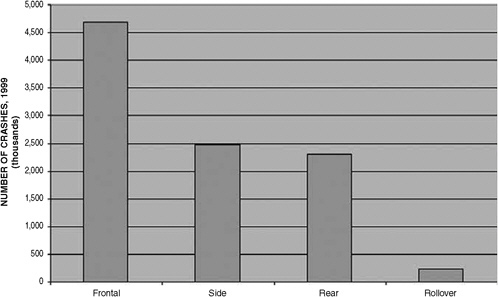 more than side and rear crashes combined (see Figure D-2). They also resulted in thousands of serious injuries. NHTSA believes that most of these rollovers, and the tragic injuries that result, are preventable, if consumers understand the roles the driver, roadside environment and vehicle play in causing the rollover. 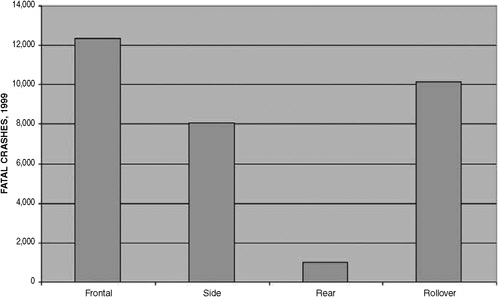 How do most vehicle rollovers occur?

From its studies of real-world single-vehicle crashes, NHTSA has determined that more than 90 percent of rollovers occur after a driver runs off of the road (see Figure D-3). This does not refer to vehicles trying to negotiate difficult trails away from public roads. It refers to vehicles rolling over off of the pavement after the driver has lost control of the vehicle. Once the vehicle slides off of the pavement, a ditch, soft soil, curb or other tripping mechanism usually initiates the rollover.

How should the consumer interpret NHTSA’s rollover resistance ratings?

The rollover resistance ratings are based on static stability factor, which is essentially a measure of how top heavy a vehicle is. The rollover resistance ratings of vehicles were compared to 220,000 actual single vehicle crashes, and the ratings were found to relate very closely to the real-world rollover experience of vehicles. Based on these studies, NHTSA found that taller, narrower vehicles, such as sport utility vehicles (SUVs), are more likely than lower, wider vehicles, such as passenger cars, to trip and roll over once they leave the roadway. Accordingly, NHTSA awards more stars to wider and/or lower vehicles. The rollover resistance rating, however, does not address the causes of the driver losing control and the vehicle leaving the roadway in the first place. 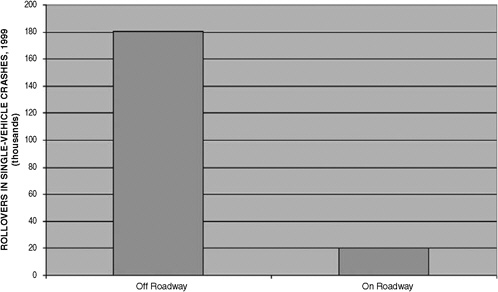 Does a vehicle with a higher rollover resistance rating mean it is immune from rollovers?

How does electronic stability control (ESC) affect rollover, and what is its relationship to the rollover resistance ratings?

Most rollovers occur when a vehicle runs off the road and strikes a curb, soft shoulder, guard rail or other object that “trips” it. The rollover resistance ratings estimate the risk of rollover in event of a single-vehicle crash, usually when the vehicle runs off the road. ESC (which is offered under various trade names) is designed to assist drivers in maintaining control of their vehicles during extreme steering maneuvers. It senses when a vehicle is starting to spin out (oversteer) or plow out (understeer), and it turns the vehicle to the appropriate heading by automatically applying the brake at one or more wheels. Some systems also automatically slow the vehicle with further brake and throttle intervention. What makes ESC promising is the possibility that with its aid many drivers will avoid running off the road and having a single-vehicle crash in the first place. However, ESC cannot keep a vehicle on the road if its speed is simply too great for the available traction and the maneuver the driver is attempting, or if road departure is a result of driver inattention. In these cases, a single-vehicle crash will happen, and the rollover resistance rating will apply as it does to all vehicles in the event of a single-vehicle crash. Some of the 2001 model year vehicles that will be rated have ESC and are identified in the charts with the rollover resistance ratings.

What other information does a consumer need to know in order to minimize the chances of rollover?

A rollover crash is a complex event, heavily influenced by driver and road characteristics, as well as the design of the vehicle. Consequently, a consumer should also know that: 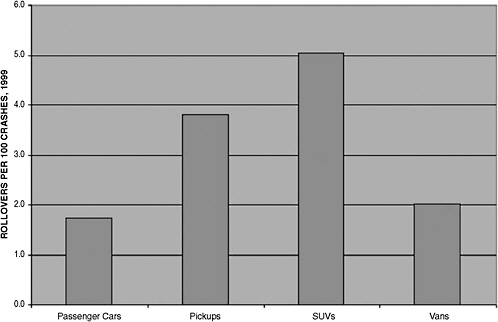 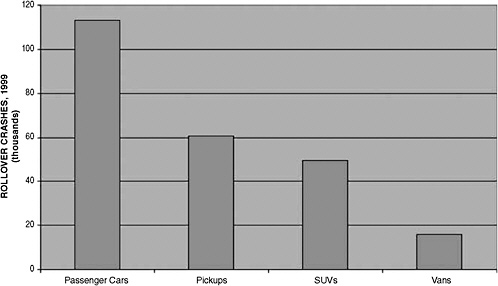 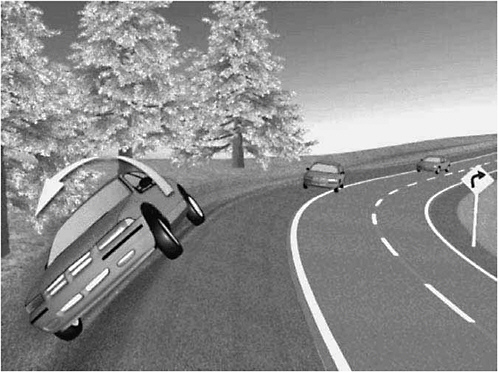 control at highway speeds and the vehicle slides sideways off the road and overturns when the tires dig into the dirt (see Figure D-7).

What can the consumer do to reduce rollover risk?

Since most vehicle rollovers are single-vehicle crashes, they are often preventable. They are unlike non-rollover multiple-vehicle crashes involving frontal, side and rear impacts, where another driver may have been responsible for the crash. To minimize the risk of a rollover crash and serious injury, the driver should 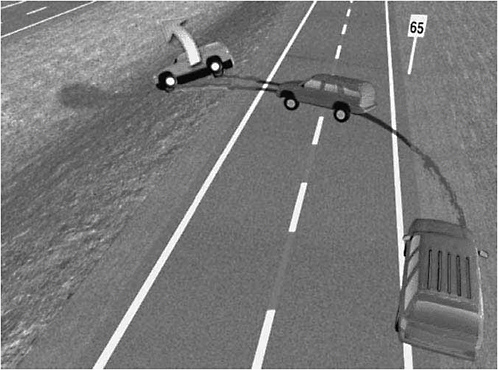 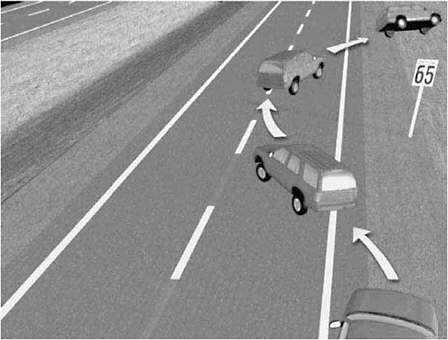 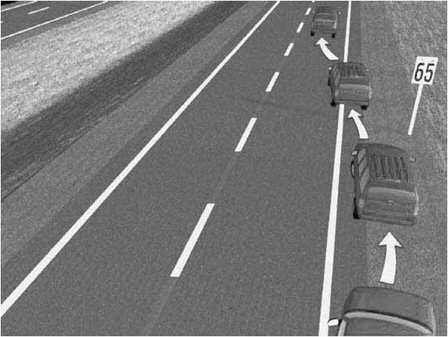 the road and increasing the risk of rolling over. Improper inflation can accelerate tire wear, and can even lead to catastrophic failures. It is important that consumers maintain tires properly and replace them, when necessary. 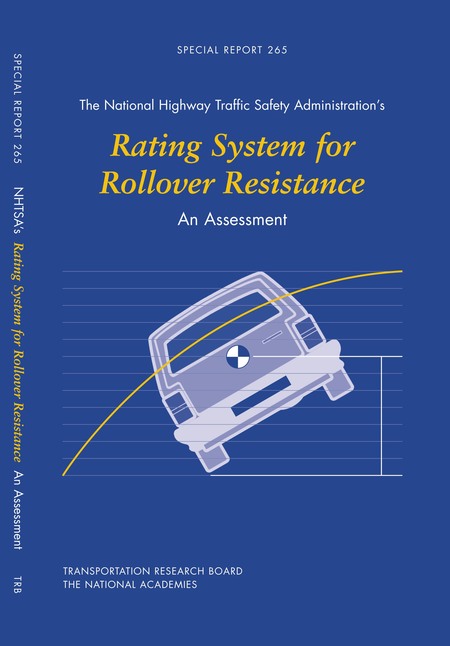 TRB Special Report 265 - An Assessment of the National Highway Traffic Safety Administration's Rating System for Rollover Resistance finds that the static stability factor is a useful indicator of a vehicle's propensity to roll over, but that U.S. government ratings for new cars, light trucks, and sport utility vehicles do not adequately reflect differences in rollover resistance shown by available crash data. According to the report, the five-star system should be revised to allow better discrimination among vehicles and incorporate results from road tests that measure vehicle control and handling characteristics.

After thoroughly evaluating NHTSA's development of the rating system, the committee that conducted this study concurred with the agency's reliance on a static measure of vehicle stability but pointed out some inadequacies of the statistical model used to relate this static measure to rollover risk. Alternative statistical approaches would provide a better approximation of risk. The rating system itself was found wanting. The procedures used to develop and test the ratings with consumers through focus groups did not provide credible evidence that consumers understood the message about the actual risk associated with a given vehicle. By being limited to only five levels, the system also discarded valuable information. The data developed by NHTSA could be refined to enable consumers to discriminate better among vehicle models with regard to their rollover experience.