Elder Mistreatment: Abuse, Neglect, and Exploitation in an Aging America (2003)

Visit NAP.edu/10766 to get more information about this book, to buy it in print, or to download it as a free PDF.
Page i Share Cite
Suggested Citation:"Front Matter." National Research Council. 2003. Elder Mistreatment: Abuse, Neglect, and Exploitation in an Aging America. Washington, DC: The National Academies Press. doi: 10.17226/10406.
×

Panel to Review Risk and Prevalence of Elder Abuse and Neglect Richard J. Bonnie and Robert B. Wallace, Editors Committee on National Statistics and Committee on Law and Justice Division of Behavioral and Social Sciences and Education THE NATIONAL ACADEMIES PRESS Washington, D.C. www.nap.edu

THE NATIONAL ACADEMIES PRESS â¢ 500 Fifth Street, N.W. â¢ Washington, DC 20001 NOTICE: The project that is the subject of this report was approved by the Governing Board of the National Research Council, whose members are drawn from the councils of the National Academy of Sciences, the National Academy of Engineering, and the Institute of Medicine. The members of the committee respon- sible for the report were chosen for their special competences and with regard for appropriate balance. This study was supported by Contract/Grant No. N01-0D-4-2139 between the National Academy of Sciences and DHHS/National Institutes of Health. Any opin- ions, findings, conclusions, or recommendations expressed in this publication are those of the author(s) and do not necessarily reflect the views of the organizations or agencies that provided support for the project. Library of Congress Cataloging-in-Publication Data Bonnie, Richard J. Elder mistreatment : abuse, neglect, and exploitation in an aging America / Richard J. Bonnie and Robert B. Wallace, Editors. p. cm. Includes bibliographical references and index. ISBN 0-309-08434-2 (hardback) 1. AgedâAbuse ofâUnited States I. Wallace, Robert B. II. Title. HV6626.3+ 362.6âdc21 2002012762 Additional copies of this report are available from The National Academies Press, 500 Fifth Street, N.W., Lockbox 285, Washington, DC 20055; (800) 624-6242 or (202) 334-3313 (in the Washington metropolitan area); Internet, http:// www.nap.edu Printed in the United States of America Copyright 2003 by the National Academy of Sciences. All rights reserved. Suggested citation: National Research Council. (2003). Elder Mistreatment: Abuse, Neglect, and Exploitation in an Aging America. Panel to Review Risk and Preva- lence of Elder Abuse and Neglect. Richard J. Bonnie and Robert B. Wallace, Editors. Committee on National Statistics and Committee on Law and Justice, Division of Behavioral and Social Sciences and Education. Washington, DC: The National Academies Press.

Acknowledgments T he Panel to Review Risk and Prevalence of Elder Abuse and Neglect wishes to thank the many individuals who contributed to the preparation to this report. The project was sponsored by the Na- tional Institute on Aging, National Institutes of Health, U.S. Department of Health and Human Services, with additional support from the Office of Behavioral and Social Science Research and the Office of Research on Womenâs Health of the National Institutes of Health and the Agency for Health Care Research and Quality. Sidney Stahl served as project officer and was very helpful in orienting the panel to the major issues on elder abuse and neglect that needed to be considered. The panel also expresses its appreciation to Laurence Branch, Duke University; Larry Corder, Duke University; and Brian Kemp, University of California, Irvine, who prepared background papers in addition to those included in this volume. Thanks are also due to those who reviewed the papers commissioned by the panel and provided many helpful commentsâ Barbara Altman, National Center for Health Statistics; Jack Guralnik, Na- tional Institute on Aging; Jane Tilly, Urban Institute; Jordan Kosberg, Uni- versity of Alabama; Kenneth Minaker, Massachusetts General Hospital; Carla VandeWeerd, University of South Florida; Richard Schulz, University of Pittsburgh; and George Annas, Boston University. The panel also wishes to thank Marie-Therese Connolly, U.S. Depart- ment of Justice; Patricia McFeeley, University of New Mexico; Joanne Otto, Colorado Department of Human Services; and Patsy Klaus, U.S. ix

x ACKNOWLEDGMENTS Department of Justice, for their presentations of background information to the panel. The panel is also grateful to the staff of the National Research Council for its superb support throughout the course of the study. Study Director Earl Pollack, ably assisted by Marisa Gerstein, Danelle Dessaint, and Tanya Lee, helped the panel stay well-informed, on track, and on time. Constance Citro, senior project officer, provided many helpful suggestions. Lora Hamp, a third-year student at the University of Virginia Law School, pro- vided valuable research assistance on elder mistreatment legislation and on legal and ethical issues in elder mistreatment research. This report has been reviewed in draft form by individuals chosen for their diverse perspectives and technical expertise, in accordance with proce- dures approved by the Report Review Committee of the National Research Council. The purpose of this independent review is to provide candid and critical comments that will assist the institution in making the published report as sound as possible and to ensure that the report meets institutional standards for objectivity, evidence, and responsiveness to the study charge. The review comments and draft manuscript remain confidential to protect the integrity of the deliberative process. We thank the following individuals for their participation in the review of this report: Ira Ralph Katz, Institute on Aging, University of Pennsylva- nia; Jennifer M. Kinney, Department of Sociology, Gerontology, and An- thropology, Miami University; Jill E. Korbin, Office of the Dean, College of Arts and Sciences, Case Western Reserve University; Kenneth Minaker, Massachusetts General Hospital, Boston; Becky Morgan, Stetson College of Law; and Stephen Zarit, Gerontology Center, Pennsylvania State Univer- sity. Although the reviewers listed above have provided many constructive comments and suggestions, they were not asked to endorse the conclusions or recommendations; nor did they see the final draft of the report before its release. The review of this report was overseen by Robert Butler, Interna- tional Longevity Center-USA, Ltd., New York City. Appointed by the National Research Council, he was responsible for making certain that an independent examination of this report was carried out in accordance with institutional procedures and that all review comments were carefully con- sidered. Responsibility for the final content of this report rests entirely with the authoring committee and the institution.

Preface R eports of this kind typically begin by calling at- tention to the magnitude and social cost of the problem being explored. The fact that equivalent statements cannot be made with any confidence about elder mistreatment is a telling indication of the need for the report, as well as for an intensified program of research. No survey of the U.S. population has ever been undertaken to provide a national estimate for the occurrence of any form of elder mistreatment; the magnitude of the prob- lemâamong community-dwelling elders, as well as those residing in long- term care facilitiesâis basically unknown. The best estimates, based on figures extrapolated from local studies, suggest that the national prevalence of elder mistreatment (including physical abuse, psychological abuse, and neglect) is between 1 and 2 million. The occurrence and severity of elder mistreatment are likely to increase markedly over the coming decades, as the population ages, caregiving re- sponsibilities and relationships change, and increasing numbers of older persons require long-term care. Although the magnitude of elder mistreatment is unknown, its social and moral importance is self-evident. However, there is no solid under- standing of the nature, causes, and consequences of elder mistreatment, the effectiveness and cost of current interventions, or measures that could suc- cessfully be taken to prevent it or to ameliorate its effects. The purpose of this report is to help the nation remedy this deficiency. In Understanding Child Abuse and Neglect (1993) and Violence in Families (1998), the National Research Council was able to map out a xiii

xiv PREFACE comprehensive blueprint for research in the adjacent domains of child mis- treatment and intimate partner violence. However, so little is now known about elder mistreatment that it would be premature to draw up a detailed research agenda for this nascent field. Instead, this report is best seen as laying the foundation for a much-needed scientific effort. The panel em- phasizes the need to develop a better understanding of elder mistreatment in its different forms, to develop better measures for it, and to undertake a variety of population-based studies to ascertain prevalence and risk factors. Several priorities for research are identified in relation to the determinants of elder mistreatment, clinical screening and case identification, and pre- ventive interventions. We are not the first to lament the poor state of knowledge about elder mistreatment. In 1986, a consensus conference of leading researchers (in- cluding two of our panel members) was convened at the University of New Hampshire to point the way toward advancing knowledge. The conclu- sions and recommendations reached at that conference are strikingly simi- lar to those appearing in this report. One of the participants at the New Hampshire conference was Rosalie Wolf, by all accounts one of the founding leaders of the elder mistreatment field. The panel expressed its deep gratitude to Dr. Wolf for presenting her views at our initial meeting, despite her poor health, and was devastated when she passed away within weeks of her appearance at our meeting. We are publishing the remarks that she delivered at that meeting as an appen- dix to this report. Indeed, our report is in many ways a tribute to Dr. Wolfâs heroic efforts over three decades to nurture the field of elder mis- treatment research. Abuse and neglect of older individuals in society breaches a widely embraced moral commitment to protect vulnerable people from harm and to ensure their well-being and security. To carry out this commitment, one cannot rely on good intentions alone. A substantial investment in scientific research along the lines outlined in this report is imperative to enable society to enhance its understanding of elder mistreatment and to mount an effective response to it in the 21st century. Richard J. Bonnie, Chair Panel to Review Risk and Prevalence of Elder Abuse and Neglect

Next: Executive Summary »
Elder Mistreatment: Abuse, Neglect, and Exploitation in an Aging America Get This Book
× 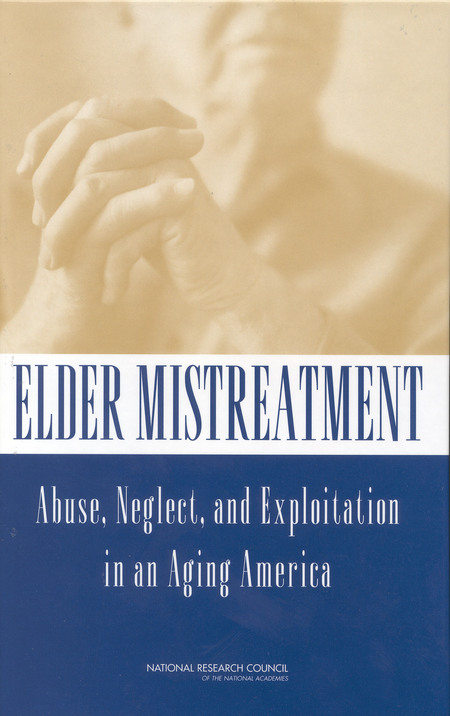 Since the late 1970s when Congressman Claude Pepper held widely publicized hearings on the mistreatment of the elderly, policy makers and practitioners have sought ways to protect older Americans from physical, psychological, and financial abuse. Yet, during the last 20 years fewer than 50 articles have addressed the shameful problem that abusers—and sometimes the abused themselves—want to conceal.

Elder Mistreatment in an Aging America takes a giant step toward broadening our understanding of the mistreatment of the elderly and recommends specific research and funding strategies that can be used to deepen it. The book includes a discussion of the conceptual, methodological, and logistical issues needed to create a solid research base as well as the ethical concerns that must be considered when working with older subjects. It also looks at problems in determination of a report's reliability and the role of physicians, EMTs, and others who are among the first to recognize situations of mistreatment.

Elder Mistreatment in an Aging America will be of interest to anyone concerned about the elderly and ways to intervene when abuse is suspected, including family members, caregivers, and advocates for the elderly. It will also be of interest to researchers, research sponsors, and policy makers who need to know how to advance our knowledge of this problem.