Living on an Active Earth: Perspectives on Earthquake Science (2003)

Get This Book
Visit NAP.edu/10766 to get more information about this book, to buy it in print, or to download it as a free PDF.
Page i Share Cite
Suggested Citation:"Front Matter." National Research Council. 2003. Living on an Active Earth: Perspectives on Earthquake Science. Washington, DC: The National Academies Press. doi: 10.17226/10493.
×

Living on an ACTIVE Earth

Committee on the Science of Earthquakes

Board on Earth Sciences and Resources

This study was supported through endowment funds provided by the National Academy of Sciences. Any opinions, findings, conclusions, or recommendations expressed in this publication are those of the author(s) and do not necessarily reflect the views of the organizations or agencies that provided support for the project.

Living on an active earth : perspectives on earthquake science / Committee on the Science of Earthquakes, Board on Earth Sciences and Resources, Division on Earth and Life Studies, National Research Council of the National Academies.

COMMITTEE ON THE SCIENCE OF EARTHQUAKES

BOARD ON EARTH SCIENCES AND RESOURCES

Although the reviewers listed above have provided many constructive comments and suggestions, they were not asked to endorse the conclusions or recommendations nor did they see the final draft of the report before its release. The review of this report was overseen by Clarence R. Allen, professor emeritus, California Institute of Technology, Pasadena.

Appointed by the National Research Council, he was responsible for making certain that an independent examination of this report was carried out in accordance with institutional procedures and that all review comments were carefully considered. Responsibility for the final content of this report rests entirely with the authoring committee and the institution.

Recent earthquakes in California, Japan, Taiwan, and Turkey have demonstrated the devastating consequences of seismicity in large urban areas. Vulnerability to these seismic hazards can be reduced through scientific research in support of mitigation. However, applying this research to mitigation of seismic hazards has been a challenge. The study presented in this report was motivated by questions surrounding the effectiveness of the “knowledge-based” strategy taken by the National Earthquake Hazard Reduction Program (NEHRP). A series of critiques in the early to mid 1990s, including a 1995 report by the congressional Office of Technology Assessment (1), concluded that the NEHRP approach short-changed practical measures for mitigating earthquake losses, creating an “implementation gap” in which risk-reduction efforts lagged far behind the knowledge base created by basic research. A preliminary review by the National Research Council (NRC) Committee on Seismology indicated that the debate over the structure of a national program for earthquake risk reduction lacked adequate information about the prospects for, and potential payoffs from, long-term basic research and the relationship of current research activities, both basic and applied, to mitigation efforts.

Based on this assessment, a proposal was submitted to the National Academies, which established the Committee on the Science of Earthquakes and provided a grant from its endowment funds to

assess the current scientific understanding of earthquake processes. In its work, the study committee will prepare a comprehensive summary of the multidisciplinary research throughout the earth and physical sciences on the origins, properties, and consequences of earthquakes, assess

This report is meant to provide a technical reference for scientists, engineers, and policy makers concerned with understanding earthquakes and reducing society’s vulnerability to seismic hazards.

To gather information for the study the committee met with representatives from government agencies, nongovernmental organizations, and private sector companies concerned with earthquake research and engineering, hazard mitigation, and earthquake insurance. Briefings were provided by AXA Reinsurance, the Department of Defense, Department of Energy, Federal Emergency Management Agency, Incorporated Research Institutions for Seismology, National Aeronautics and Space Administration, National Institute of Standards and Technology, National Science Foundation, Office of Science and Technology Policy, and U.S. Geological Survey. Input from the broader Earth science community was solicited through an editorial in Seismological Research Letters (2) and the committee’s web site, which included a series of white papers on different earthquake topics. Altogether the committee met eight times to gather information and prepare its report. 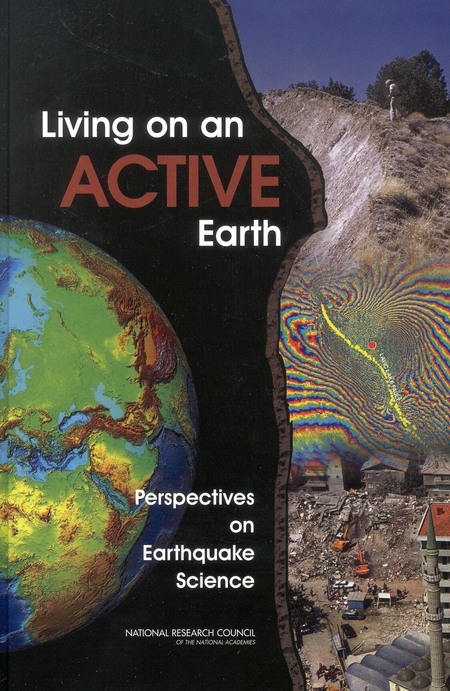 The destructive force of earthquakes has stimulated human inquiry since ancient times, yet the scientific study of earthquakes is a surprisingly recent endeavor. Instrumental recordings of earthquakes were not made until the second half of the 19th century, and the primary mechanism for generating seismic waves was not identified until the beginning of the 20th century.

From this recent start, a range of laboratory, field, and theoretical investigations have developed into a vigorous new discipline: the science of earthquakes. As a basic science, it provides a comprehensive understanding of earthquake behavior and related phenomena in the Earth and other terrestrial planets. As an applied science, it provides a knowledge base of great practical value for a global society whose infrastructure is built on the Earth's active crust.

This book describes the growth and origins of earthquake science and identifies research and data collection efforts that will strengthen the scientific and social contributions of this exciting new discipline.