Visit NAP.edu/10766 to get more information about this book, to buy it in print, or to download it as a free PDF.
Page i Share Cite
Suggested Citation:"Front Matter." National Academy of Engineering. 2002. Raising Public Awareness of Engineering. Washington, DC: The National Academies Press. doi: 10.17226/10573.
×

THE NATIONAL ACADEMIES PRESS · 500 Fifth Street, N.W. · Washington, DC 20001 NOTICE: This publication has been reviewed according to procedures approved by the National Academy of Engineering report review process. Funding for the activity that led to this publication was provided by the Elizabeth and Stephen Bechtel, Jr., Foundation. Any opinions, findings, conclusions, or recommendations expressed in this publica- tion are those of the author(s) and do not necessarily reflect the views of the organizations or agencies that provided support for the project. International Standard Book Number 0-309-08624-8 Additional copies of this report are available from the National Academies Press, 500 Fifth Street, N.W., Lockbox 285, Washington, DC 20055; (800) 624-6242 or (202) 334-3313 (in the Washington metropolitan area); Internet, http://www.nap.edu Copyright 2002 by the National Academy of Sciences. All rights reserved. Printed in the United States of America

Preface In April 2001, The National Academy of Engineering (NAE), with funding from the Elizabeth and Stephen Bechtel, Jr., Foundation, initiated a new project as part of its Public Understanding of Engineering Program. The project was informed by public opinion surveys that indicated that the American public has minimal understanding of engineering and engineers and little appreciation for what they do. A survey/questionnaire was developed in conjunction with outside consultants, Market Research Bureau and McMahon Communications, to create an inventory of current outreach programs for improving public awareness of engineering and to better understand their effectiveness or lack of effectiveness. The survey was administered and the results were collected by the consultants. To review the results of the survey/questionnaire, the NAE formed the Committee on Public Awareness of Engineering (CPAE), composed of a group of distin- guished citizens interested in and/or involved in the engineering community. Based on their review, the committee made recommendations for the engineering community's future approach to public awareness activities. This report is a report from the NAE to the engineering community based on a synthesis of the consultants' report of the survey, background information developed by the NAE, and the recommendations of the CPAE. Wm. A. Wulf President National Academy of Engineering v

up Acknowledgments 4 This report has been reviewed in draft form by individuals chosen for their diverse perspectives and technical expertise, in accordance with procedures ap- proved by the National Academy of Engineering report review process. The purpose of this independent review is to provide candid and critical com- ments that will assist the institution in making its published report as sound as possible and to ensure that the report meets institutional standards for objectivity, evidence, and responsiveness to the study charge. The review comments and draft manuscript remain confidential to protect the integrity of the deliberative process. We wish to thank the following individuals for their participation in the review of this report: Albert A. Dorman, AECOM; Samuel C. Florman, Kreisler Borg Florman Construction Company; Henry Kressel, E.M. Warburg, Pincus & Company, LLC; Susan Staffin Metz, Stevens Institute of Technology; Robert L. O'Rourke, California Institute of Technology; and Winfred M. Phillips, Univer- sity of Florida. Although the reviewers listed above have provided many constructive com- ments and suggestions, they were not asked to endorse the conclusions or recom- mendations nor did they see the final draft report before its release. The review of this report was overseen by Harold Forsen, National Academy of Engineering. Appointed by the National Academy of Engineering Executive Office, he was responsible for making certain that an independent examination of this report was carried out in accordance with institutional procedures and that all review com- ments were carefully considered. Responsibility for the final content of this re- port rests entirely with the institution.

Next: Executive Summary »
Raising Public Awareness of Engineering Get This Book
× 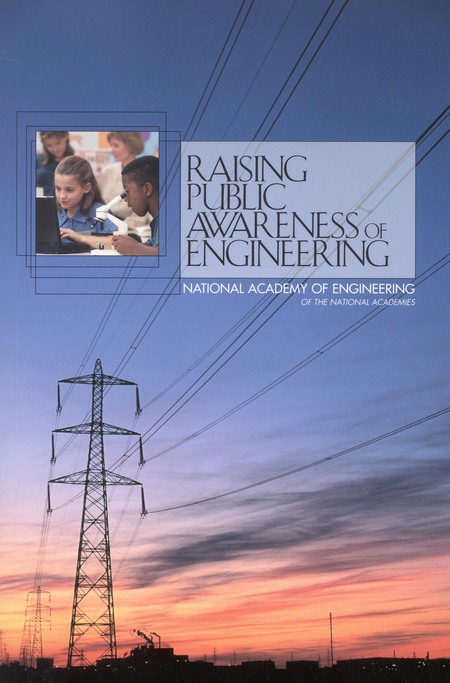