Visit NAP.edu/10766 to get more information about this book, to buy it in print, or to download it as a free PDF.
Page i Share Cite
Suggested Citation:"Front Matter." National Research Council. 2003. Cumulative Environmental Effects of Oil and Gas Activities on Alaska's North Slope. Washington, DC: The National Academies Press. doi: 10.17226/10639.
×

THE NATIONAL ACADEMIES PRESS · 500 Fifth Street, N.W. · Washington, DC 20001 NOTICE: The project that is the subject of this report was approved by the Governing Board of the National Research Council, whose members are drawn from the councils of the National Academy of Sciences, the National Academy of Engineering, and the Institute of Medicine. The members of the com- mittee responsible for the report were chosen for their special competences and with regard for appropriate balance. This project was supported by Contract No. X-82827701 between the National Academy of Sciences and the U.S. Environmental Protection Agency. Any opinions, findings, conclusions, or recommendations ex- pressed in this publication are those of the authoress and do not necessarily reflect the view of the organiza- tions or agencies that provided support for this project. International Standard Book Number 0-309-08737-6 (Book) International Standard Book Number 0-309-50625-5 (PDF) Library of Congress Control Number 2003107939 Cover design by Van Nguyen, National Research Council. The bowhead whale was carved by the late Alaska Native artist Harry Koozaata, Sr., probably in the 1970s. The drilling rig is in the Kuparak oil field. Additional copies of this report are available from: The National Academies Press 500 Fifth Street, NW Box 285 Washington, DC 20055 800-624-6242 202-334-3313 (in the Washington metropolitan area) http://www.nap.edu Copyright 2003 by the National Academy of Sciences. All rights reserved. Printed in the United States of America

Preface Since production began on Alaska's North Slope in the early 1970s, about 14 billion barrels of oil have been ex- tracted from underground deposits and sent to markets else- where. As much as 20 billion additional barrels of oil might be extracted from the area. In addition, the region has huge reserves of natural gas and coal. Therefore, if market condi- tions remain favorable, exploration and extraction are likely to continue on the North Slope and to expand into areas that have until now been uninfluenced by industrial activity. The residents of Alaska and throughout the United States have benefited from oil and gas production on the North Slope, but, as with all industrial developments, these activities have brought with them social and environmental costs. Although research has been carried out on the North Slope during the past several decades to understand the ef- fects of oil and gas exploration, development, and produc- tion, an integrated, comprehensive assessment of those ef- fects has not been attempted. Understanding the nature, extent, and causes of both the benefits and costs is an essen- tial component of effective, long-term decision-making about resource management on the North Slope. To rectify this gap in knowledge, the United States Con- gress asked the National Research Council to review infor- mation about oil and gas activities on Alaska's North Slope and to assess their known and probable future cumulative effects on the physical, biological, and human environment. The NRC established a committee whose 18 members had expertise in a wide range of disciplines, including geology, hydrology, physics of permafrost, biology, sociology, an- thropology, and economics. In making its assessments, the committee relied on its collective expertise, extensive litera- ture review, information gathered during public meetings held in various places in Alaska, and written materials sup- plied by many individuals and organizations. The task undertaken by the committee was difficult. The area of concern from the crest of the Brooks Range to the Arctic Ocean and from the Canadian border on the east to Six the Chukchi Sea on the west is about the size of Minne- sota. It includes the continental shelf and coastal waters, flat coastal tundra, undulating foothills, rivers, lakes, and moun- tain slopes. Industrial activity has affected primarily the area between the Canning River and the eastern part of the Na- tional Petroleum Reserve-Alaska, but more of the North Slope could be influenced by future developments. During the several decades over which industrial activities expanded on the North Slope, technological advances dramatically changed how the industry operated and how it influenced the North Slope environment. There is every reason to believe that technical innovations will continue in the future, adding to the difficulty of making projections of future cumulative effects. In addition, the climate of the North Slope has warmed considerably during the past several decades, and the rate of warming is likely to accelerate in the future. Cli- mate change is likely to influence nearly all aspects of indus- trial activity in the area and the effect of those activities on the environment. Because of the complexity of its task, the committee met eight times. Members visited the North Slope during both winter and summer conditions. Its sessions sometimes lasted as long as a week, during which there were extensive in-depth discussions of the available data and their interpre- tation. Considerable work was carried out between meetings by both committee members and NRC staff. Despite the highly varied professional backgrounds, knowledge, and per- ceptions of the committee members, candor, mutual respect, and collegiality dominated the committee's proceedings. This spirit of cooperation made this consensus report possible. The committee was ably assisted by staff of the Board on Environmental Studies and Toxicology (BEST) and the Polar Research Board (PRB), the two NRC boards under whose auspices the study was carried out. The efforts and experience of David Policansky (BEST) and Chris Elfring (PRB) assisted the committee in numerous ways and helped

Xkeep us on track. James Reisa (BEST) provided his usual thoughtful advice. Logistical, informational, and other in- valuable support was provided by BEST staff members, es- pecially Leah Probst, Jessica Brock, Dominic Brose, Marga- ret Walsh, and Suzanne van Drunick. Walter Gove provided much useful information to the committee, as did the many people who made presentations to the committee and helped us on our visits (please see Appendix B for list of partici- pants in our meetings). Many people made our task possible by providing infor- mation, hospitality, and logistic support. We thank the gov- ernments and people of Arctic Village, Barrow, Kaktovik, and Nuiqsut for their kindness, as well as members of the North Slope Borough. We thank representatives of the oil industry for sharing information and logistic support, in par- ticular Joseph Hegna of Phillips Petroleum, and Steve Tay- lor of BP. Theodore (Ted) Rockwell, Lisa Morales, and Tracie-Lynn Nadeau of EPA provided advice, encourage- ment, and information to the committee while serving as the sponsoring agency's technical representatives. We also thank the other state and federal agencies and members of the pub- lic who provided us with information, guidance, and assis- tance. This report has been reviewed in draft form by individu- als chosen for their diverse perspectives and technical exper- tise, in accordance with procedures approved by the NRC's Report Review Committee. The purpose of this independent review is to provide candid and critical comments that will assist the institution in making its published report as sound as possible and to ensure that the report meets institutional standards for objectivity, evidence, and responsiveness to the study charge. The review comments and draft manuscript remain confidential to protect the integrity of the delibera- tive process. We wish to thank the following individuals for their review of this report: Garry D. Brewer, Yale University Ingrid C. Burke, Colorado State University Brian Davies, BP Exploration-Alaska (retired) William L. Fisher, University of Texas Richard Glenn, Arctic Slope Regional Corporation Mike Joyce, ARCO Alaska (retired) John McDonagh, Alaska Office of the Oil and Gas Coordinator (retired) Edna McLean, Ilisagvik College Pamela A. Miller, Arctic Connections Don Russell, Canadian Wildlife Service, Environment Canada PREFACE Stan Senner, Alaska Audubon John J. Stegeman, Woods Hole Oceanographic Institution Arlon R. Tussing, Institute of the North Gunter Weller, University of Alaska Fairbanks William J. Wilson, LGL Alaska Research Associates, Inc. Although the reviewers listed above have provided many constructive comments and suggestions, they were not asked to endorse the conclusions or recommendations, nor did they see the final draft of the report before its release. The review of this report was overseen by John Bailar, Uni- versity of Chicago (emeritus) (review monitor) and Wilford Gardner, University of California, Berkeley (emeritus) (re- view coordinator). Appointed by the NRC, they were respon- sible for making certain that an independent examination of this report was carried out in accordance with institutional procedures and that all review comments were carefully considered. Responsibility for the final content of this re- port rests entirely with the authoring committee and the institution. Important though it is to identify and assess the nature of cumulative effects and their causes, the committee recog- nizes that this knowledge, by itself, cannot specify public policy. Nonetheless, without such analyses, decision-mak- ers lack a background against which to evaluate the asser- tions of different groups that have specific benefits to gain from policies or who are likely to bear the brunt of costs. The committee has identified the most important cumulative ef- fects of oil and gas development on the North Slope and has attempted to show why they have happened. The committee has also concluded that some effects have been much less important than they are widely believed to be. Therefore, this report should help focus future discussions on the major cumulative effects of industrial development on the North Slope. It should also direct attention to the inevitable tradeoffs that must be balanced when choosing future man- agement options and the rules and regulations under which they will be carried out. If this report serves that purpose, we will all consider ourselves suitably rewarded for our efforts. Gordon H. Orians Chair, Committee on Cumulative Environmental Effects of Oil and Gas Activities on Alaska's North Slope

CONTENTS . . . Xti! Appendixes A Acknowledgements B Abbreviations and Acronyms Petroleum Exploration and Development Petroleum Exploration and Development on the North Slope of Alaska, 167 Industry Oil and Gas Exploration on the North Slope of Alaska and the Adjacent Beaufort Sea, 172 D Oil-Field Technology and the Environment Technology in Exploration, 183 Drilling and Completion Technologies, 185 Production Technologies, 187 E Aeromap Analyses and Data F Oil Spills Oil Spills, 208 Fate of Oil Likely To Be Spilled on the North Slope, 220 Behavior of Oil in the Beaufort Sea, 220 Scenarios of Oil Spills, 224 G Saline Spills Introduction, 228 Spill Data, 228 Effects of Saline Water Spills, 230 H Traditional Knowledge Why Share? 232 How to Share? 233 I Legal Framework for Activities on State Lands on the North Slope J A Method of Addressing Economic Irreversibility All or None? 242 Two Scenarios, 243 K Biosketches of the Committee's Members Committee on Cumulative Environmental Effects of Oil and Gas Activities on Alaska's North Slope, 246 References 163 165 167 183 190 208 228 232 234 242 246 251

Next: Summary »
Cumulative Environmental Effects of Oil and Gas Activities on Alaska's North Slope Get This Book
× 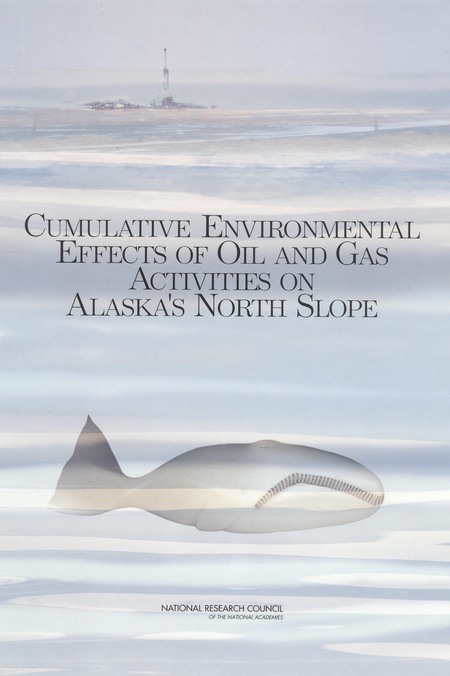 This book identifies accumulated environmental, social and economic effects of oil and gas leasing, exploration, and production on Alaska's North Slope. Economic benefits to the region have been accompanied by effects of the roads, infrastructure and activies of oil and gas production on the terrain, plants, animals and peoples of the North Slope. While attempts by the oil industry and regulatory agencies have reduced many of the environmental effects, they have not been eliminated. The book makes recommendations for further environmental research related to environmental effects.