Get This Book
Visit NAP.edu/10766 to get more information about this book, to buy it in print, or to download it as a free PDF.
Page i Share Cite
Suggested Citation:"Front Matter." National Research Council. 2003. Occupational Health and Safety in the Care and Use of Nonhuman Primates. Washington, DC: The National Academies Press. doi: 10.17226/10713.
×

Any opinions, findings, conclusions, or recommendations expressed in this publication are those of the author(s) and do not necessarily reflect the views of the organizations or agencies that provided support for the project.

US Department of Agriculture, Beltsville, Maryland

University of Tennessee, Department of Anatomy and Neurobiology, Memphis, Tennessee

The publication in 1997 of the Institute for Laboratory Animal Research (ILAR) report Occupational Health and Safety in the Care and Use of Research Animals provided an excellent reference for the development of occupational health and safety programs in the animal research setting. The diversity of species and potential hazards encountered in animal care and use programs required a broad view of many topics and by necessity, limited the depth of any particular subjects in the report. The care and use of nonhuman primates in the research setting presents a number of challenges to facility management. These challenges include specific hazards unique to some primate species and the need for guidance in risk assessment and management. This report was generated in response to that need and to specific events that took place in the same year as the first ILAR report.

On October 29, 1997, a research assistant at Yerkes Regional Primate Research Center was splashed in the eye with an unidentified body fluid from a nonhuman primate and later died from encephalitis caused by B virus (formerly called Cercopithecine herpesvirus 1). This incident confirmed the suspicion that B virus infection can be acquired through mucosal contact, in addition to the more common exposures through bites, scratches, and needle sticks. Following the incident at Yerkes, the National Institute for Occupational Safety and Health (NIOSH) conducted a limited review of policies and procedures related to working with nonhuman primates at various National Primate Research Centers. NIOSH recommended that “goggles and face shields be worn when working with

nonhuman primates.” Many investigators and caretakers expressed concern that these protective devices would obstruct vision and would be difficult to wear, leading to an increase in bites, scratches, and needles sticks due to decreased vision. There was also the concern that workers would not adhere to the NIOSH recommendation. Therefore, one specific intent of this report has been to address these recommendations and concerns.

Infectious agents represent only one of the hazards present in nonhuman-primate animal care and use programs. The size, strength, and intelligence of many primate species can result in unique hazards associated with animal care and management. In addition, these same taxonomic attributes may require heavy caging and support equipment that can present ergonomic hazards to the employee.

The Committee was asked to identify the hazards associated with using nonhuman primates in research, assess the degree of risk of these hazards, and suggest options for managing the risks including engineering controls, personal protective equipment, facilities design, and worker training. The committee was also asked to make recommendations for institutional management of workers after suspected exposure to infectious agents.

The Committee approached this task by focusing on major hazards and risks to workers at all nonhuman-primate research facilities. Recognizing that the level of risk associated with a hazard is dependent on numerous factors that vary from institution to institution, the Committee on Occupational Health and Safety in the Care and Use of Nonhuman Primates put forth in this report a programmatic structure for assessing and managing risk at different kinds of institutions. In addition to providing this structure and discussing the elements necessary for the successful implementation of an occupational health and safety program, the Committee reviewed specific recommendations on the use of personal protective equipment and the medical management of exposed workers.

This report has been reviewed in draft form by individuals chosen for their diverse perspectives and technical expertise, in accordance with procedures approved by the NRC’s Report Review Committee. The purpose of this independent review is to provide candid and critical comments that will assist the institution in making its published report as sound as possible and to ensure that the report meets institutional standards for objectivity, evidence, and responsiveness to the study charge. The review comments and draft manuscript remain confidential to protect the integrity of the deliberative process. We wish to thank the following individuals for their review of this report:

Although the reviewers listed above have provided many constructive comments and suggestions, they were not asked to endorse the conclusions or recommendations, nor did they see the final draft of the report before its release. The review of this report was overseen by W. Emmett Barkley, Howard Hughes Medical Institute, Chevy Chase, Maryland. Appointed by the National Research Council, he was responsible for making certain that an independent examination of this report was carried out in accordance with institutional procedures and that all review comments were carefully considered. Responsibility for the final content of this report rests entirely with the authoring committee and the institution.

Since this report will undoubtedly be updated in the future, the members of the Committee ask that comments, corrections, and ideas for future studies be sent to the Institute for Laboratory Animal Research, The National Academies, 500 Fifth Street, NW, Washington, DC 20001.

Next: Executive Summary »
Occupational Health and Safety in the Care and Use of Nonhuman Primates Get This Book
× 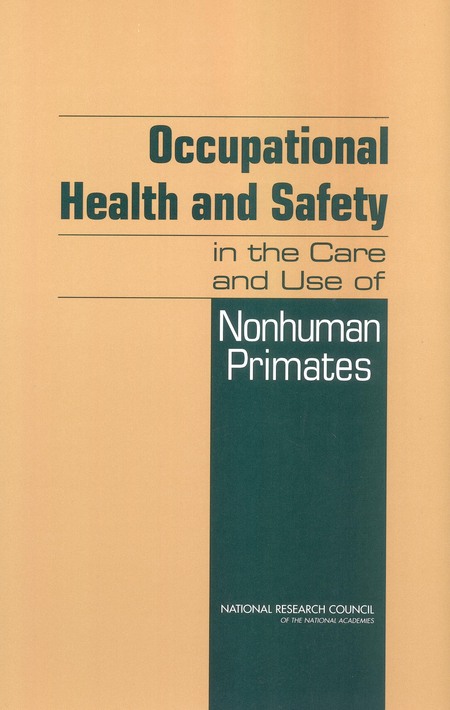 The field of occupational health and safety constantly changes, especially as it pertains to biomedical research. New infectious hazards are of particular importance at nonhuman-primate facilities. For example, the discovery that B virus can be transmitted via a splash on a mucous membrane raises new concerns that must be addressed, as does the discovery of the Reston strain of Ebola virus in import quarantine facilities in the U.S. The risk of such infectious hazards is best managed through a flexible and comprehensive Occupational Health and Safety Program (OHSP) that can identify and mitigate potential hazards.

Occupational Health and Safety in the Care and Use of Nonhuman Primates is intended as a reference for vivarium managers, veterinarians, researchers, safety professionals, and others who are involved in developing or implementing an OHSP that deals with nonhuman primates. The book lists the important features of an OHSP and provides the tools necessary for informed decision-making in developing an optimal program that meets all particular institutional needs.