Get This Book
Visit NAP.edu/10766 to get more information about this book, to buy it in print, or to download it as a free PDF.
Page i Share Cite
Suggested Citation:"Front Matter." National Research Council. 2003. Does Water Flow Influence Everglades Landscape Patterns?. Washington, DC: The National Academies Press. doi: 10.17226/10758.
×

Committee on Restoration of the Greater Everglades Ecosystem

Supported by the South Florida Ecosystem Restoration Task Force, U.S. Department of the Interior, under assistance of Cooperative Agreement No. 5280-9-9029, and U.S. Army Corps of Engineers. The views and conclusions contained in this document are those of the authoring committee and should not be interpreted as representing the official policies, either expressed or implied, of the U. S. Government.

COMMITTEE ON RESTORATION OF THE GREATER EVERGLADES ECOSYSTEM (CROGEE)1,2

University of California Division of Agriculture and Natural Resources, Oakland

This report is a product of the Committee on Restoration of the Greater Everglades Ecosystem (CROGEE), which provides consensus advice to the South Florida Ecosystem Restoration Task Force (“Task Force”). The Task Force was established in 1993 and was codified in the 1996 Water Resources Development Act (WRDA); its responsibilities include the development of a comprehensive plan for restoring, preserving and protecting the south Florida ecosystem, and the coordination of related research. The CROGEE, established in 1999, works under the auspices of the Water Science and Technology Board and the Board on Environmental Studies and Toxicology of the National Research Council.

The CROGEE’s mandate (see Box ES-1) includes providing the Task Force with scientific overview and technical assessment of the restoration activities and plans, while also providing focused advice on technical topics of importance to the restoration efforts. One such topic addressed by the Committee, under the purview of its approved CROGEE task category of Ecological Indicators, is the methods by which hydrologic performance measures are identified for the Comprehensive Everglades Restoration Plan and the way that these measures will be used to assess the restoration process.

The Workshop on Flows and Levels in the Ridge and Slough Region of the Everglades, held by the CROGEE in Miami, Florida, on October 15, 2002, examined how flow might be incorporated into hydrologic performance measures for restoration, and what the practical implications of this might be. The workshop was open to the public and was attended by about 50 people from federal, state, and local government, universities, consulting firms, and environmental organizations. The agenda and list of attendees are shown in Appendix A.

The basis for the workshop was the Science Coordination Team’s (SCT) August 2002 draft White Paper titled The Role of Flow in the Everglades Ridge and Slough Landscape. Reviewers’ comments on this draft were also available. A panel of experts was assembled to give presentations, participate in discussions, and answer questions on the theme of the workshop. Subsequent to the workshop, the CROGEE deliberated the issues on several occasions. The conclusions and recommendations of this report take into account a subsequent revision of the White Paper by the SCT. The executive summary of the final version of the White Paper is in Appendix E, and the full report is available online at http://www.sfrestore.org/sct/docs/.

This report has been reviewed in draft form by individuals chosen for their diverse perspectives and technical expertise in accordance with procedures approved by the NRC’s Report Review Committee. The purpose of this independent review is to provide candid and critical comments that will assist the institution in making its published report as sound as possible and to ensure that the report meets institutional standards for objectivity, evidence, and responsiveness to the study charge. The review comments and draft manuscript remain confidential to protect the integrity of the deliberative process.

We wish to thank the following individuals for their review of this report:

Although the reviewers listed above have provided many constructive comments and suggestions, they were not asked to endorse the conclusions or recommendations nor did they see the final draft of the report before its release. The review of this report was overseen by Stephen J. Burges, University of Washington, Seattle. Appointed by the National Research Council, Dr. Burges was responsible for making certain that an independent examination of this report was carried out in accordance with institutional procedures and that all review comments were carefully considered. Responsibility for the final content of this report rests entirely with the authoring committee and the institution.

Committee on Restoration of the Greater Everglades Ecosystem

Next: EXECUTIVE SUMMARY »
Does Water Flow Influence Everglades Landscape Patterns? Get This Book
× 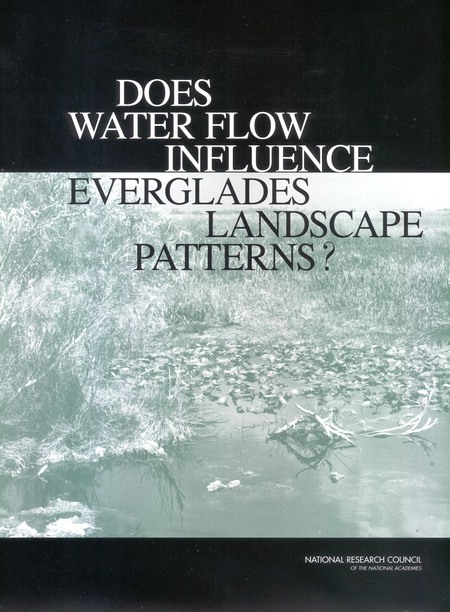 The report evaluates a White Paper written by restoration planners in South Florida on the role of water flow in restoration plans. The report concludes that there is strong evidence that the velocity, rate, and spatial distribution of water flow play important roles in maintaining the tree islands and other ecologically important landscape features of the Everglades.