Get This Book
Visit NAP.edu/10766 to get more information about this book, to buy it in print, or to download it as a free PDF.
Page i Share Cite
Suggested Citation:"Front Matter." National Academy of Engineering. 2004. Accident Precursor Analysis and Management: Reducing Technological Risk Through Diligence. Washington, DC: The National Academies Press. doi: 10.17226/11061.
×

NOTICE: This publication has been reviewed according to procedures approved by a National Academy of Engineering report review process. Publication of signed work signifies that it is judged a competent and useful contribution worthy of public consideration, but it does not imply endorsement of conclusions or recommendations by the NAE. The interpretations and conclusion in such publications are those of the authors and do not purport to represent the views of the council, officers, or staff of the National Academy of Engineering.

Funding for the activity that led to this publication was provided by: National Science Foundation, Public Entity Risk Institute, U.S. Nuclear Regulatory Commission, and National Aeronautics and Space Administration.

Copyright 2004 by the National Academies. All rights reserved.

Almost every year there is at least one technological disaster that highlights the challenge of managing technological risk. On February 1, 2003, the space shuttle Columbia and her crew were lost during reentry into the atmosphere. In the summer of 2003, there was a blackout that left millions of people in the northeast United States without electricity. Forensic analyses, congressional hearings, investigations by scientific boards and panels, and journalistic and academic research have yielded a wealth of information about the events that led up to each disaster, and questions have arisen. Why were the events that led to the accident not recognized as harbingers? Why were risk-reducing steps not taken?

This line of questioning is based on the assumption that signals before an accident can and should be recognized. To examine the validity of this assumption, the National Academy of Engineering (NAE) undertook the Accident Precursors Project in February 2003. The project was overseen by a committee of experts from the safety and risk-sciences communities. Rather than examining a single accident or incident, the committee decided to investigate how different organizations anticipate and assess the likelihood of accidents from accident precursors.

The project culminated in a workshop held in Washington, D.C., in July 2003. This report includes the papers presented at the workshop, as well as findings and recommendations based on the workshop results and committee discussions. The papers describe precursor strategies in aviation, the chemical industry, health care, nuclear power and security operations. In addition to current practices, they also address some areas for future research.

Using accident precursors to predict and prevent accidents is not a new idea. Two industry programs, the Accident Sequence Precursors Program overseen by

the U.S. Nuclear Regulatory Commission and the Aviation Safety Reporting System operated by the National Aeronautics and Space Administration, have been in existence for several decades; many other industry-specific programs have been established since those programs were started. Research has also been under way for several decades, some of which was highlighted in two earlier workshop publications, Near-Miss Reporting as a Safety Tool (Van der Schaaf et al., 1991) and Accident Precursors and Probabilistic Risk Assessment (Bier, 1998). Indeed, research results have increasingly been incorporated into practice. Nevertheless, a reassessment and affirmation of the objectives, challenges, limitations, and opportunities of precursor strategies is in order. This report is intended to address that need.

The committee was asked to meet two objectives: (1) to provided a common lexicon and framework for precursors with cross-industry applicability; and (2) to document and highlight the success of systems that have benefited from precursor information.

The committee attempted to facilitate cross-industry communication and suggest tools and terminology (see Appendixes A and D) to encourage dialogue but did not espouse a particular definition of precursors, a particular framework, or a specific approach. The keynote speakers provided an overview of the issues of precursor management (Section II); subsequent speakers discussed how different approaches could be used for risk assessment (Section III), risk management (Section IV), and for linking risk assessment and risk management on an organizational or national level (Section V).

This report reflects the contributions of many individuals to whom the editors extend their gratitude. First, we wish to thank the members of the committee whose involvement, participation, and interest ensured the timely and successful completion of the project. Second, we thank the workshop speakers, whose contributions cannot be overstated. The quality of their papers is a testament to their efforts. We are also grateful to the sponsors of this project, the National Science Foundation, Public Entity Risk Institute, and U.S. Nuclear Regulatory Commission. They provided support for project staff, administrative and editorial services, committee meetings, the workshop and follow-up meetings, and the compilation and publication of this report. Finally, we extend our thanks to the NAE staff who helped in the day-to-day operations of the project and in assembling and publishing the report. Proctor Reid ensured that the project was conducted in accordance with NAE policies. Nathan Kahl coordinated the logistics of the workshop. Carol Arenberg edited the manuscript and oversaw publication of the report. Penny Gibbs and Vivienne Chin provided administrative support throughout the project.

This report has been reviewed by individuals chosen for their diverse perspectives and technical expertise, in accordance with procedures approved by the National Research Council Report Review Committee. The purpose of this independent review was to provide candid, critical comments to assist NAE in making the published report as sound as possible and to ensure that the report meets institutional standards of objectivity, evidence, and responsiveness to the study charge. The review comments and the draft manuscript remain confidential to protect the integrity of the deliberative process.

Responsibility for the final content of the report rests entirely with the authoring committee and the institution.

Next: Section I Committee Summary Report1 The Accident Precursors Project: Overview and Recommendations »
Accident Precursor Analysis and Management: Reducing Technological Risk Through Diligence Get This Book
× 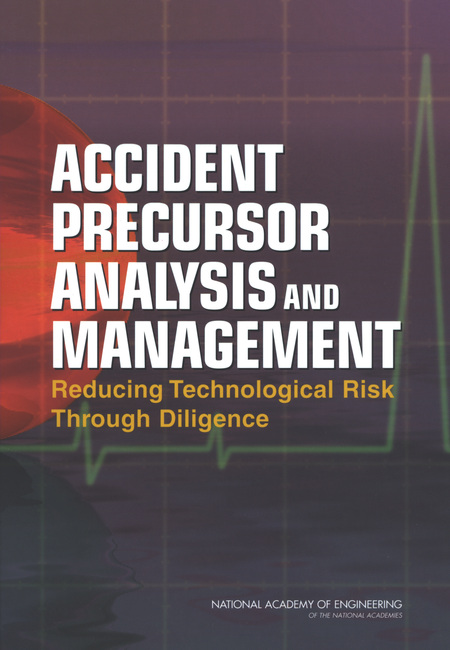 In the aftermath of catastrophes, it is common to find prior indicators, missed signals, and dismissed alerts that, had they been recognized and appropriately managed before the event, could have resulted in the undesired event being averted. These indicators are typically called "precursors." Accident Precursor Analysis and Management: Reducing Technological Risk Through Diligence documents various industrial and academic approaches to detecting, analyzing, and benefiting from accident precursors and examines public-sector and private-sector roles in the collection and use of precursor information. The book includes the analysis, findings and recommendations of the authoring NAE committee as well as eleven individually authored background papers on the opportunity of precursor analysis and management, risk assessment, risk management, and linking risk assessment and management.