Visit NAP.edu/10766 to get more information about this book, to buy it in print, or to download it as a free PDF.
Page i Share Cite
Suggested Citation:"Front Matter." National Research Council. 2005. Mineral Tolerance of Animals: Second Revised Edition, 2005. Washington, DC: The National Academies Press. doi: 10.17226/11309.
×

THE NATIONAL ACADEMIES PRESS â¢ 500 Fifth Street, N.W. â¢ Washington, DC 20001 NOTICE: The project that is the subject of this report was approved by the Governing Board of the National Research Council, whose members are drawn from the councils of the National Academy of Sciences, the National Academy of Engineering, and the Institute of Medicine. The members of the committee responsible for the report were chosen for their special competences and with regard for appro- priate balance. This study was supported by Contract/Grant No. 223-01-2460 between the National Academy of Sciences and the Center for Veterinary Medicine of the U.S. Food and Drug Administration, Department of Health and Human Services. Any opinions, findings, conclusions, or recommendations expressed in this publication are those of the author(s) and do not necessarily reflect the views of the organizations or agencies that provided support for the project. Library of Congress Cataloging-in-Publication Data Mineral tolerance of animals / Committee on Minerals and Toxic Substances, Board on Agriculture and Natural Resources, Division on Earth and Life Studies.â 2nd rev. ed. p. cm. Rev. ed. of: Mineral tolerance of domestic animals / National Research Council (U.S.). Subcommittee on Mineral Toxicity in Animals. 1980. Includes bibliographical references and index. ISBN 0-309-09654-5 (pbk.) â ISBN 0-309-55027-0 (pdf) 1. Veterinary toxicology. 2. Minerals in animal nutrition. I. National Research Council (U.S.). Committee on Minerals and Toxic Substances. II. National Research Council (U.S.). Subcommittee on Mineral Toxicity in Animals. Mineral tolerance of domestic animals. SF757.5M56 2005 636.089â²59âdc22 2005024930 Additional copies of this report are available from the National Academies Press, 500 Fifth Street, N.W., Lockbox 285, Washington, DC 20055; (800) 624-6242 or (202) 334-3313 (in the Washington metropoli- tan area); Internet, http://www.nap.edu Copyright 2005 by the National Academy of Sciences. All rights reserved. Printed in the United States of America

Next: Summary »
Mineral Tolerance of Animals: Second Revised Edition, 2005 Get This Book
× 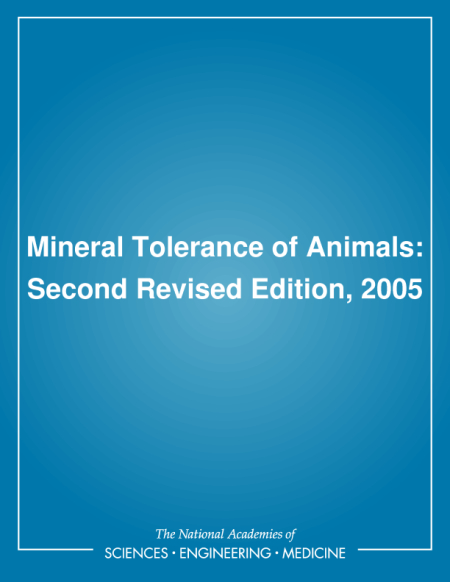 Excess minerals in the diet and water of animals can have an adverse effect on animal health, consumers, and the environment. Preventing unsafe mineral exposure is a fundamental part of animal nutrition and management. At the request of the Food and Drug Administration, the National Academies convened a committee to make recommendations on animal tolerances and toxic dietary levels, updating a 1980 report on mineral tolerance in domestic animals. Based on a review of current scientific data and information, the report sets a "maximum tolerable level" (MTL) for each mineral as it applies to the diets of farm animals, poultry, and fish. The report includes an analysis of the effects of toxic levels in animal diets, and it identifies elements that pose potential human health concerns. The report recommends research that includes a better characterization of animal exposure to minerals through feedstuffs; a better understanding of the relationship between mineral concentrations in feed and water and the levels in consumer products such as meat, milk, and eggs; and more research on the maximum tolerable level of minerals for aquatic and companion animals.