Get This Book
Visit NAP.edu/10766 to get more information about this book, to buy it in print, or to download it as a free PDF.
Page i Share Cite
Suggested Citation:"Front Matter." National Research Council. 2006. Systems for State Science Assessment. Washington, DC: The National Academies Press. doi: 10.17226/11312.
×

School of Education and Department of Chemistry, State University of New York at Albany

Department of Economics, University of Florida

School of Education, University of Michigan

School of Education, University of Pittsburgh

Department of Psychology and Center for the Study of Learning, Instruction, and Teacher Development, University of Illinois, Chicago

BOARD ON TESTING AND ASSESSMENT

Center for the Study of Evaluation, University of California, Los Angeles

College of Education, University of Iowa

Department of Psychology, University of Houston

Institute for Research on Poverty, Center for Demography, University of Wisconsin–Madison

Department of Measurement and Statistics, University of Maryland, College Park

Center for the Study of Learning, Instruction, and Teacher Development, University of Illinois, Chicago

This report could not have been produced without the support of a number of people, and we are grateful for their contributions. First, we would like to acknowledge the support of our sponsor, the National Science Foundation, and, in particular, thank program officer Janice Earle for the encouragement she provided over the course of this study. Her belief in the importance of this project was highly valued by the committee.

We owe a debt of gratitude to the individuals who served on the working groups of state science supervisors, state directors of assessment, and science teachers, whose names are listed in this front matter. Members of these groups attended and contributed to committee meetings, participated in workshops, and reviewed drafts of the committee’s and design teams’ reports. Throughout the study they kept the committee informed about important practical issues related to No Child Left Behind (NCLB) and states’ efforts to meet the legislative requirements for science standards and assessments. Several of the working group members also participated directly in the work of the design teams, providing the wisdom of practice to teams’ work.

and implementing science assessment systems to meet the requirements of the No Child Left Behind Act of 2002. A portion of the committee’s first meeting in August 2003 was an information gathering workshop at which Sue Rigney, U.S. Department of Education, Office of Elementary and Secondary Education, made a detailed presentation of the legislation and its requirements for science standards and assessments. Rolf Blank, Council of Chief State School Officers; Michael Hill, National Association of State Boards of Education; Bruce Hunter, American Association of School Administrators; Mary Kusler, American Association of Schools Administrators, Rural Schools Initiative; Michelle McGlaughlin, American Federation of Teachers; and Scott Young, National Conference of State Legislatures provided the committee with an overview of the challenges that states face in implementing science assessments under NCLB. We are grateful for the guidance these individuals provided.

We thank Robert Rothman, Annenberg Institute for School Reform, Brown University, for describing the many methods used by states for aligning their science standards and assessments, and Dylan Wiliam, Educational Testing Service, and Paul Black, Kings College, Cambridge, England, for providing the committee with a deeper understanding of international approaches to science education and assessment. We are also grateful to Mark Reckase and Joseph Martineau for sharing their thinking on the ways in which students’ achievement in science might be measured over time and across grades, and to Stan Metzenberg, California State University, Northridge, for sharing early drafts of his paper “Improving State Science Assessments,” with the committee. We also thank Alice Fu, a graduate student at Stanford University, for her assistance with gathering examples to illustrate state science standards.

At the committee’s third meeting, Gerald Tindal, University of Oregon, and Mark Reckase helped the committee understand many of the issues involved in developing and implementing an assessment program that is highly inclusive. We are grateful for their perspectives and are appreciative of their participation in our work.

In May 2004, the committee held a workshop at which more than 100 participants representing educational organizations, states, test publishers, and educational researchers participated in detailed discussions of the design teams’ work and gave their reactions to the usefulness of the various models. We are grateful to all of the design team members who participated and to the members of the working groups who served as discussion leaders at the workshop. At that same workshop, the committee also explored the ways in which technology could be used for improving the design, implementation, and administration of science assessments. We thank Randy Bennett, Educational Testing Service, and Edys Quellmalz for sharing their work on this topic. We also thank Geneva Haertel, SRI International, who coauthored the paper that Edys presented.

We have been most fortunate to have an outstanding staff working with us on this project. We are especially grateful to Alix Beatty, who joined the project

just as we were beginning to write this report and whose assistance was invaluable in getting the volume ready for publication. Susan McCutchen and Andrew Tompkins have provided ongoing research support to the committee since its inception, and Judy Koenig helped us early on to organize the work of our design teams and to develop their charge. The committee benefited tremendously from having two excellent senior project assistants. Jane Phillips supported the committee extremely well until her retirement. We are very grateful to Teresia Wilmore, who joined the project after Jane left and who has served ever since, unflappably and flawlessly. She has dealt smoothly with the logistics of our meetings, with our enormous collections and distributions of materials, and with the many aspects of managing a committee, three working groups, six design teams, and multiple authors of commissioned papers.

The Board on Testing and Assessment (BOTA) and the Board on Science Education (BOSE) were instrumental in shaping early discussions about the project and in providing general guidance and support along the way. Their insights and knowledge at critical points in our work are much appreciated. We are especially grateful to BOTA members Lorrie Shepard, Eva Baker, and Bob Mislevy for their contributions to our thinking on possible assessment system models. We thank Stuart Elliott, BOTA director, and Jean Moon, BOSE director, for their support and encouragement. We note in particular our deep gratitude to Stuart, who attended all of our committee meetings and provided wise counsel at every stage of the committee’s work.

Also at the National Research Council (NRC), many people contributed to the successful completion of this project. Martin Orland and Patricia Morison, director and associate director, respectively, of the Center for Education, provided the committee with encouragement and guidance along the way. Viola Horek, administrative coordinator for the center, and Lisa Alston, administrative coordinator for BOTA, were always there to ensure that the project ran smoothly and that the committee had everything it needed to do its work. We are extremely grateful to Kirsten Sampson Snyder who shepherded the committee’s report through review and to Steve Olson and Christine McShane whose expert editing of the text of this report markedly improved its readability.

Above all, we would like to thank the committee members who gave enormous amounts of time and energy to this endeavor. The committee’s work covered an exceedingly broad array of complex topics and issues, and committee members exhibited a deep commitment to learning from each other’s expertise and producing a final report that reflects a consensus among all members. Everyone on the committee drafted text and contributed constructive, critical thinking to the deliberations. We are most grateful to them, as they made this report possible.

This report has been reviewed in draft form by individuals chosen for their diverse perspectives and technical expertise, in accordance with procedures approved by the NRC’s Report Review Committee. The purpose of this indepen-

Although the reviewers listed above have provided many constructive comments and suggestions, they were not asked to endorse the conclusions or recommendations nor did they see the final draft of the report before its release. The review of this report was overseen by Adam Gamoran, Department of Sociology, University of Wisconsin–Madison, and R. Duncan Luce, Institute for Mathematical Behavioral Science, University of California, Irvine. Appointed by the NRC, they were responsible for making certain that an independent examination of this report was carried out in accordance with institutional procedures and that all review comments were carefully considered. Responsibility for the final content of this report rests entirely with the authoring committee and the institution.

Next: Executive Summary »
Systems for State Science Assessment Get This Book
× 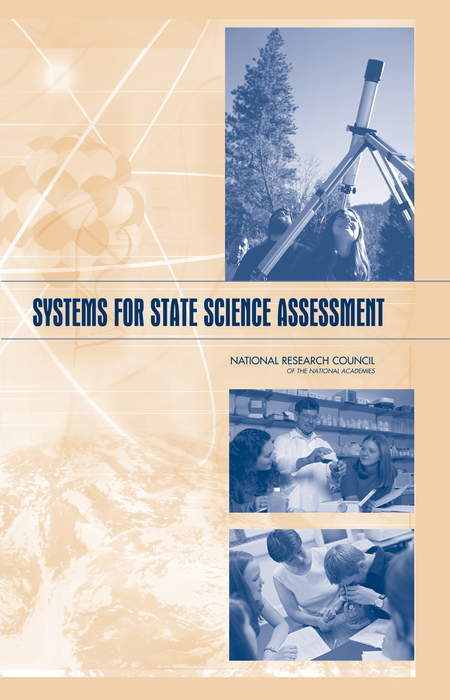 In response to the No Child Left Behind Act of 2001 (NCLB), Systems for State Science Assessment explores the ideas and tools that are needed to assess science learning at the state level. This book provides a detailed examination of K-12 science assessment: looking specifically at what should be measured and how to measure it.

Along with reading and mathematics, the testing of science is a key component of NCLB—it is part of the national effort to establish challenging academic content standards and develop the tools to measure student progress toward higher achievement. The book will be a critical resource for states that are designing and implementing science assessments to meet the 2007-2008 requirements of NCLB.

In addition to offering important information for states, Systems for State Science Assessment provides policy makers, local schools, teachers, scientists, and parents with a broad view of the role of testing and assessment in science education.