Chapter:Creation of an Underground Repository for Spent Nuclear Fuel near the City of Zheleznogorsk (Eastern Siberia)

Get This Book
Visit NAP.edu/10766 to get more information about this book, to buy it in print, or to download it as a free PDF.
« Previous: Investment and International Aspects of the Problem of Spent Nuclear Fuel Management
Page 166 Share Cite
Suggested Citation:"Creation of an Underground Repository for Spent Nuclear Fuel near the City of Zheleznogorsk (Eastern Siberia)." National Research Council. 2005. An International Spent Nuclear Fuel Storage Facility: Exploring a Russian Site as a Prototype: Proceedings of an International Workshop. Washington, DC: The National Academies Press. doi: 10.17226/11320.
×

At the request of the Ministry of Atomic Energy (Minatom), research has been under way for a number years to locate a site appropriate for the construction of an underground storage facility for the long-term storage of high-level radioactive wastes from the Mining-Chemical Complex (located in the city of Zheleznogorsk, Krasnoyarsk Krai), including anticipated future wastes from the RT-2 plant as well as spent nuclear fuel that will not be reprocessed. Efforts have been conducted under a program adopted by Minatom and the Russian Academy of Sciences. This program was developed taking into account criteria established by the International Atomic Energy Agency (IAEA) and the concept for the safe isolation of radioactive wastes in geologic formations.

In order to conduct this research a team of specialists was created, and included representatives from Minatom, the Russian Academy of Sciences, St. Petersburg and Krasnoyarsk universities, and various geological organizations from Krasnoyarsk Krai (see Box 1). The Radium Institute was assigned the role of providing scientific leadership and coordination for the site search and selection efforts.

SELECTION OF THE NIZHNEKANSK GRANITOID MASSIF

The territory covered in the initial search effort included portions of three global geologic structures: the Siberian platform, the west Siberian plate, and the Altai-Sayan orogenic zone. An analysis of all information gathered on the geology, tectonics, seismic activity, natural resource utilization, and other aspects,

The concept for the site search was based on the idea that the segment of Earth’s crust being sought must be distinguished by a sufficient degree of homogeneity and by minimal fracturability and permeability of adjoining rock formations. Initially about 20 potentially suitable sites were identified in the southern

part of the Yenisei ridge and associated geologic structures (see Figure 2). The selection process was based on the following: 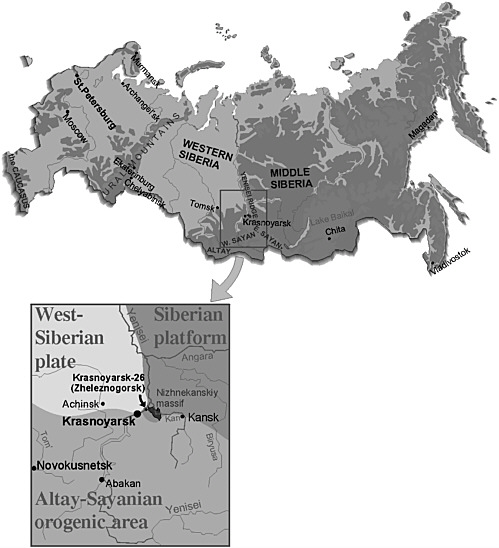 FIGURE 1 Location of the Nizhnekansk granitoid massif, a potential site for the disposition of high-level wastes generated by the Mining-Chemical Complex in Zheleznogorsk (Krasnoyarsk-26) and the RT-2 plant. 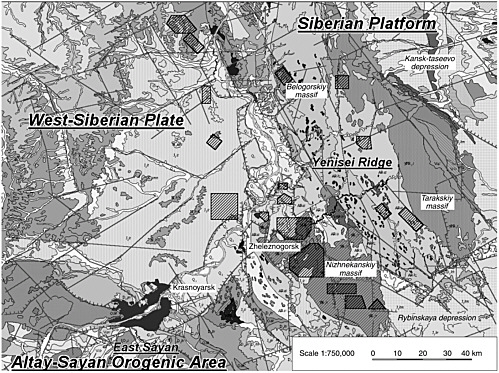 FIGURE 2 Geological structure of the territory studied and promising sites selected in the first phase (scale 1:750,000).

On the basis of specially developed search criteria—including seismic and tectonic activity of the area, dimensions of comparatively homogeneous rock formations, and distance from the Mining-Chemical Complex—the Nizhnekansk granitoid massif, one of the largest granitoid massifs in central Siberia, was selected from among all potentially suitable sites. It has an area of about 3000 km2 and is composed of granitoids from several intrusive phases. The predominant varieties, biotite granites and granodiorites, are generally viewed as providing a favorable environment for the isolation of radioactive wastes due to various attributes, such as their high hardness, low water content, poor permeability, and low porosity. The age of the crystallization of the massif has yet to be accurately determined but lies within the boundary between the Riphean and the early Paleozoic. The central part of the massif is up to 5–6 km thick, and its northwestern boundary lies only 3 km from the Mining-Chemical Complex.

IDENTIFICATION AND STUDY OF PROMISING SITES

Along with an analysis of existing materials, a series of geological-geophysical surveys on scales of 1:100,000 to 1:25,000 were carried out to fa-

cilitate identification of promising sites within the Nizhnekansk massif. These surveys included

As a result two sites in the northern part of the Nizhnekansk massif—Itatsky and Kamenny—were identified as the most promising for construction of the storage facility from among the several potentially suitable sites studied (see Figure 3). They have an area of approximately 15–20 km2 and are located 25–30 km from the Mining-Chemical Complex. As a result of the expansion of the territory being studied using geophysical methods, two blocks of poorly permeable granitoids promising for the construction of the storage facility were identified in the northwestern and northern sections of the Itatsky and Kamenny (Itatskaya suite) sites. These blocks—Bolshoi Itatsky (12 km2) and Maly Itatsky (14 km2)—are separated by the mighty Bolshoi Itatsky fault zone and bounded by highly fracturable zones of geologic violations (see Figure 4).

It must be noted that the northwestern border portion of the Nizhnekansk massif, which is the closest to the Mining-Chemical Complex, is characterized by the high heterogeneity of its geologic profile, the low hardness of its granitoids, and the complex tectonic situation, all of which were confirmed by geological and geophysical investigations conducted in 2002 at the Yenisei site. Therefore, we feel that this site has little chance of being found suitable for the construction of an underground storage facility.

Special methods of geomorphological analysis based on the principle of dependence of cycles of relief formation on global climate changes have made it possible to estimate the speed of vertical movements of Earth’s crust on the territory under study. Since the end of the Pliocene, about 1.5 million years ago, the southern part of the Yenisei ridge has been undergoing a slow process of elevation under calm tectonic conditions, with a maximum speed of about 1 mm per year.

From 1998 to 2001 personnel from the geological organizations of Krasnoyarsk Krai drilled a number of shallow (from 10 to 50 m) mapping boreholes as well as four deep ones (300 m, 500 m, and two 700 m boreholes) in the territory being studied. Analysis of the drilled cores and the various coring data collected revealed a complicated picture. In some cases the drilling confirmed the presence of deeply buried monolithic granitoids with a low level of fractur- 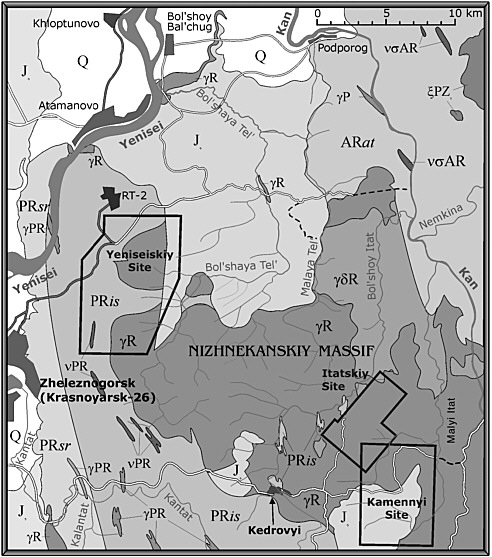 FIGURE 3 Schematic geological map of the northern part of the Nizhnekansk massif and location of the most promising sites relative to the RT-2 plant (scale 1:200,000). The most promising Itatsky and Kamenny sites, selected on the basis of reconnaissance work and tectonic structure analysis in 1:50,000 scale, along with the alternative Yenisei site.

The Russian Academy of Sciences Institute of the Geology of Ore Deposits, Petrography, Mineralogy, and Geochemistry has conducted detailed petrographic and petrophysical studies of samples taken from drill cores 1-I and 1-K at the Nizhnekansk massif. It was established that the granitoids include zones of 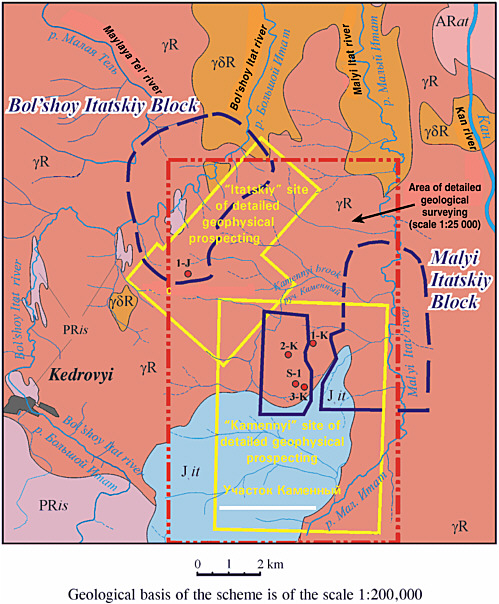 FIGURE 4 Location of the Bolshoi Itatsky and Maly Itatsky blocks in the Verkhneitatsy site (scale 1:100,000).

blastomylonite formation, cataclasm, and hydrothermal-metasomatic processing, accompanied by the crystallization of such secondary minerals as carbonates, muscovite, chlorite, and epidote. Such phenomena undoubtedly violate the homogeneity of the rock formations at the selected sites. The spatial distribution of these phenomena at the Nizhnekansk massif must be evaluated along with their

connection to the fault zones, for example, and their role in the characterization of the geological environment in which the storage facility would be located. This role could be variable in nature; for example, from the standpoint of barrier properties, the presence of secondary low-temperature mineralization could, conversely, increase the sorption capacity of the granitoids. This is illustrated by several experiments that have been conducted at the Radium Institute.

The results of plutonium sorption experiments on granitoid samples with various levels of secondary changes show that the maximum sorption capacity was found in a sample of quartz diorite containing such secondary minerals as chlorite, biotite, seritsite, and carbonate. The minimum sorption capacity of all the samples studied was found in monolithic leucocratic granite, while catalyzed leucogranites occupy a middle position on the sorption spectrum (see Figure 5).

At the present stage in the process of studying potential sites, data on the deep structure of the massif have been obtained by surface geophysical methods and confirmed by direct drilling but only to a depth of 700 m. Therefore, the task 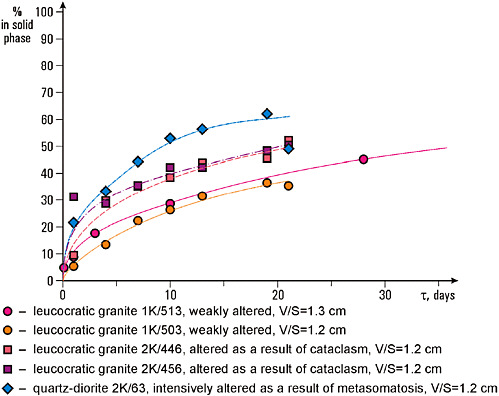 FIGURE 5 Sorption (in percentage figures) of plutonium from simulated groundwater on monolithic specimens made of granitoids of the Nizhnekansk massif depending on both time of phase contact and degree of secondary alteration.

of drilling boreholes to a depth of 2–3 km is one of the most important objectives for further study of the massif.

EVALUATION OF BARRIER PROPERTIES OF GRANITOIDS

Rocks represent the fundamental barrier to the movement of stored radionuclides into the biosphere. Therefore, great significance lies in experimental data on the permeability and radiation and heat resistance of various types of rock, as well as the restraining properties of the rock with regard to radionuclides. Special radiochemical experiments conducted at the Radium Institute demonstrate that the sorption restraint of plutonium and americium by granitoids from the

Nizhnekansk massif is sufficiently high. This is illustrated by the high levels of the distribution coefficients for these radionuclides (see Table 1). Researchers have also detected signs of the diffusion introduction of radionuclides (Pu, Am) into several minerals, for example, monazite and zircon.

All of this substantially limits the distance that long-lived radionuclides can migrate along with underground waters in rock. Calculations have shown that the speed of radionuclide migration is extremely low, on the order of 10−8 m per year for monolithic rock up to 10−5 m per year for weakened zones (see Table 2).

Work is also under way to gather experimental data to characterize the physical-mechanical properties of granitoids of the Nizhnekansk massif.

LONG-TERM PROGNOSIS FOR THE DEVELOPMENT OF THE AREA

A number of forecast assessments have been made with regard to the geological-tectonic development of the area. These forecasts have shown the following:

An analysis of paleoclimatic reconstructions give grounds to postulate that possible climatic changes over the next 50,000 years would preclude any crises that would intensify erosion processes or affect the security of an underground storage facility in the Nizhnekansk granitoid massif.

FUNDAMENTAL RESULTS AND STATUS OF EFFORTS

At present the fundamental results of research on the selection for a site for an underground storage facility in the Krasnoyarsk area are as follows:

selection have been documented on a step-by-step basis with the help of a range of geological and geophysical methods.

Based on data that has been gathered, an area encompassing the Kamenny and Itatsky sites has been announced as the site of more detailed preliminary prospecting work for the construction of an underground laboratory and the future waste burial site, and relevant materials have been submitted to the All-Russia Scientific Research and Design Institute for Industrial Technology in Moscow.

Because of a lack of financing, work on the study of the Kamenny and Itatsky sites is currently halted. However, in our opinion these sites, like the Nizhnekansk massif as a whole, remain insufficiently studied. Following is a list of the fundamental unresolved problems:

Given the above points, it seems necessary (if financing is available) to continue comprehensive geological, hydrogeological, geophysical, and geochemical research aimed at providing a scientific basis for the selection of a specific site for the construction of an underground laboratory and subsequently the storage facility itself. 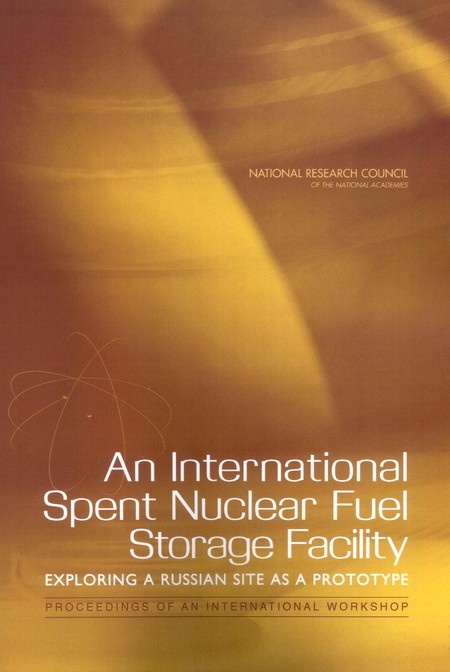 As part of a long-standing collaboration on nuclear nonproliferation, the National Academy of Sciences and the Russian Academy of Sciences held a joint workshop in Moscow in 2003 on the scientific aspects of an international radioactive disposal site in Russia. The passage of Russian laws permitting the importation and storage of high-level radioactive material (primarily spent nuclear fuel from reactors) has engendered interest from a number of foreign governments, including the U.S., in exploring the possibility of transferring material to Russia on a temporary or permanent basis. The workshop focused on the environmental aspects of the general location and characteristics of a possible storage site, transportation to and within the site, containers for transportation and storage, inventory and accountability, audits and inspections, and handling technologies.